At last, summer is ending.

Well, at least for me. 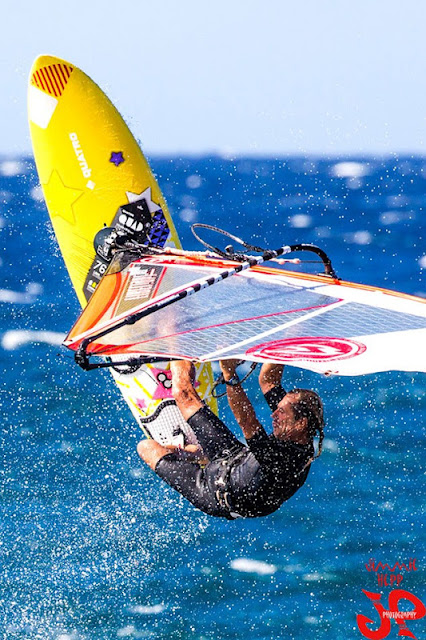 I'm about to leave for my yearly Italy trip. On the way back, as usual, I'll stop in LA.
What's unusual is that this year I haven't booked the LA-Maui ticket yet, which I will do based on the forecast.

If the waves at Trestles are going to be good, I might go surf and watch the ASP contest, as usual.
And if the forecast is good, after that I might go somewhere else too... we'll see.

But if those forecasts won't be good and the Maui one will, I'll be back on a plane rigth away.
Travels based on forecasts are my favorites.

Talking about forecasts, of course as soon as I leave, there will be a NW and a south swell. I don't care, I'll get plenty when I come back...

So, here's a last post before leaving.
This summer (or at least the portion I've been here, which is from mid July) has been very poor in terms of waves. You would expect that on the north shore. It's the south shore that has been lacking action.
Fortunately, between downwinders and knee high surfing, SUP boards have pretty much saved me.
That's why I just bought another one.

These are the photos that were on my camera. I really can't complain. No waves, but what a magic place Maui is anyway...

Makena is a good place from where to start. 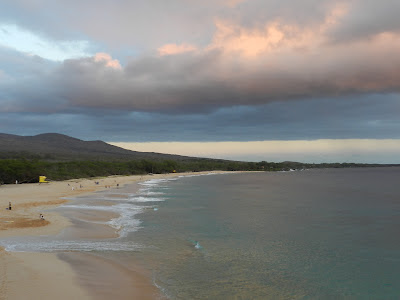 Another of those nasty sugar cane harvesting fires. 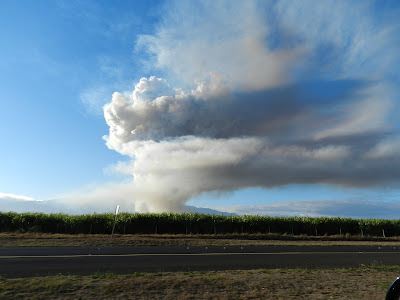 Another sunny morning on the south shore. 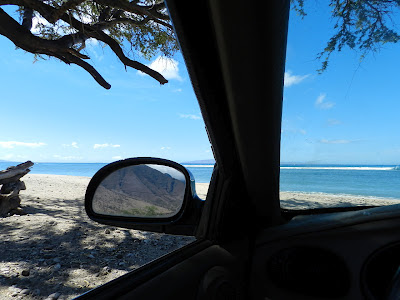 Not a bad place where to stalk. 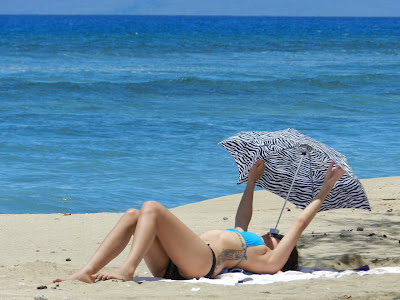 This is Hookipa on August 17 and there actually were some waves that day! 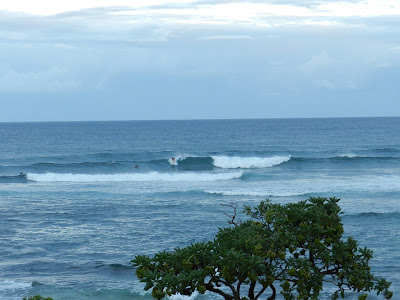 Bootie of the summer, for sure. 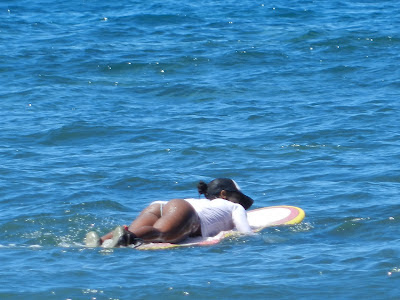 My little bass amp is back from its long Haiku retreat. Amazingly enough, it didn't rot and I've been having fun playing some catchy little reggae lines. 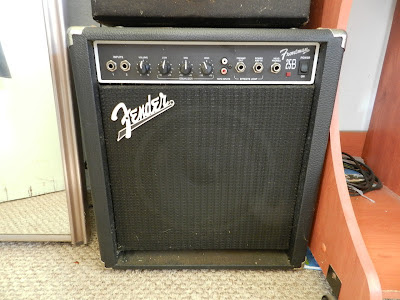 Like this one.
If you're really going to watch it, connect some decent speakers to your computer, please. The sound is bad enough with them, but without is truly horrible.
Oh, don't mind me if I'm naked... must be a bass player thing.

Ok. If you're a bass player you're probably in agony right now.
I'll save you from your pain with this.
The cat is histerycal and this guy plays a mean bass.


Couple of boards for sale.
This is a custom Quatro that Keith Taboul shaped for himself. It has seen some repairs, but they were all professionally made and it's still pretty light.
It's a 75l quad and it's a very radical board. Just a tad too small for me for the winter waves.
It's for sale on craigslist for $300. Blog readers get it for $250. No straps, but fins included. 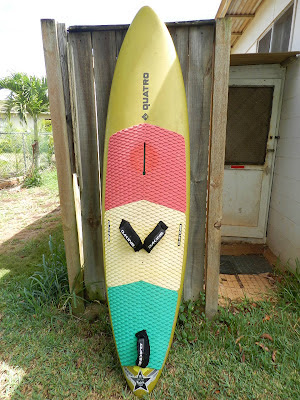 2009 Starboard Evil Twin 70l.
This is a fun board that is way easier than what the volume would suggest. Plenty wide and quite fast.
Another $250 deal. No straps, but original fins included. 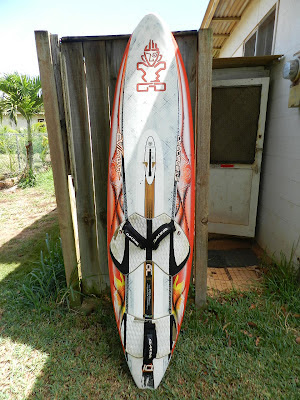 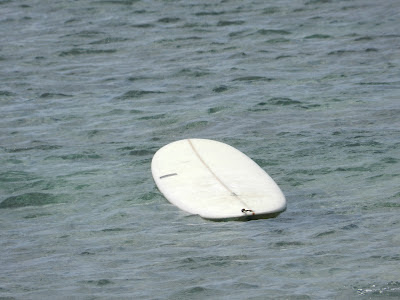 One of the many strong offshore days at thousand peaks. Still doable because the wind had cycles of up and down. 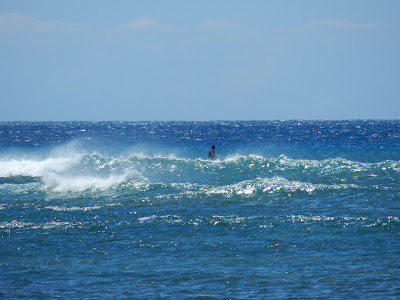 Beautiful view from behind Launiupoko with Lanai on the background. 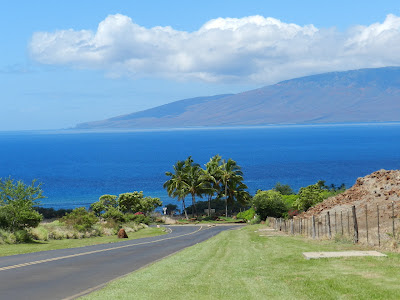 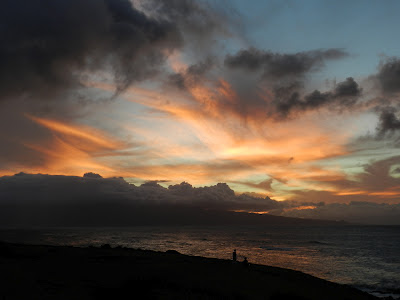 This is the 6.6x29.5 SUP I bought from Zane. It didn't have a pad and I didn't want to spend money on it, so I collected a bunch of scrap pieces at the shop and put them together with the intention of making the ugliest looking board on Earth.
I think I succeded.
I'm going to put front and back footstraps on it. 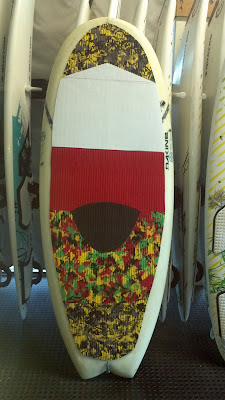 And then I'll try to do moves like this one I just imagined. It's called the Pole Vault.
Well, I'm not sure I'll be able to pull it off, but it was fun just thinking about it...
Yes, drawing is not my best skill. 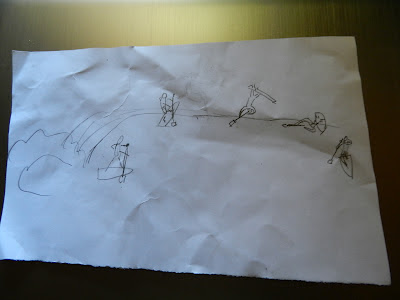 Well, for the first time in 11 years, I'm not bummed to leave Maui to go to Italy, but I'm actually looking forward to it.
Not sure what to attribute that. A bunch of reasons, I guess...
But if feels good. Awwright!

Oh, the shot on the top is from today. Thanks Jimmie Hepp, the other shots in this gallery.