Alessa Quizon posted this and I'm happy to share. 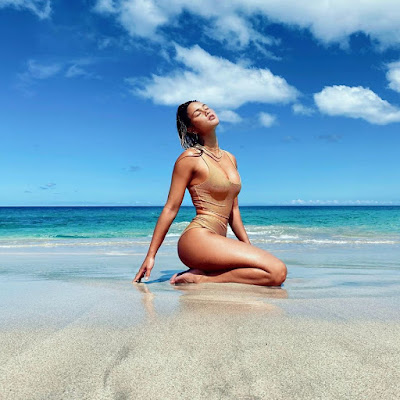 I didn't take any picture yesterday, mostly because of lack of time. It was in fact and intense day of action, I'm just going to mention that my first proper wing downwinder was mental. Literally. But physical too. And spiritual. The main factor was getting over the fear of flying so fast. Every time I managed to relax, I did much better. Fortunately I used a perfectly sized 3.0 How Wings Maui wing (thanks Jeff Henderson!) and my smallest GoFoil wings (GL120 and small pedestal tail), hence the ones that can handle the fastest speed, and it was an extremely intense experience out in the middle of a wild ocean.

I'm so going to get into this, I'm buying a 36 inch mast today. At the moment I still don't own a wing, but I'm going to buy one very soon. It might not be for everyone, but if you're willing to learn a new discipline and go through the beginner stages, get a foil, get a wing and get ready to embrace a brand new endeavor... it's totally worth it. What a summer this has been and what a summer it will continue to be!

2ft 14s and I woke up early... good combo. Check the Lahaina webcam if interested, for size, conditions and consistency. 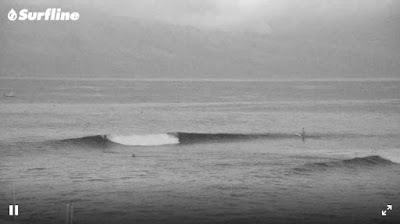 Not sure who this guy on a full Duotone setup is (doesn't look like Bobo), but he sure likes to jump during a downwinder.
Ps. After reading this, a blog reader sent me an email saying: "small wing and small board make Bobo look bigger than he is". Thanks! 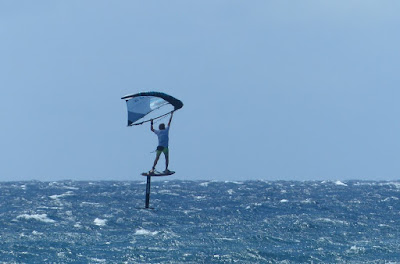 Kidding me? Look at that! 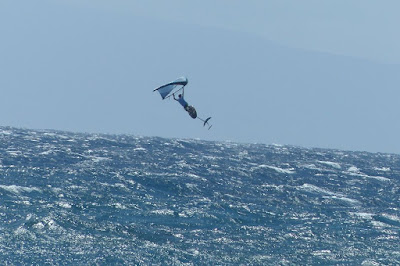 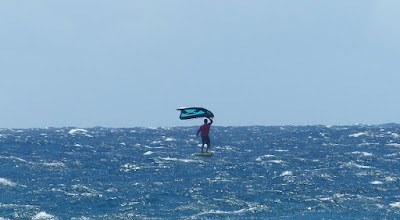 Here's Pat Caldwell's latest write-up.
The low-end gales in the Tasman Sea 6/27-29 (that I collaged on July 4th) that were expected to produce local background surf 7/7-8 never materialized. The associated low pressure moved east of New Zealand within 7/2-3 with a short-lived fetch of gales building seas near 20 feet. The head of the fetch nosed into the subtropics, which offsets the marginal magnitude and short duration for Hawaii surf potential.

Below is the collage of the maps of July 1-4 that will help follow.

Looks like we're having a bit more luck with this one, here's a pretty solid one. Check the Lahaina webcam if interested, for size, conditions and consistency. 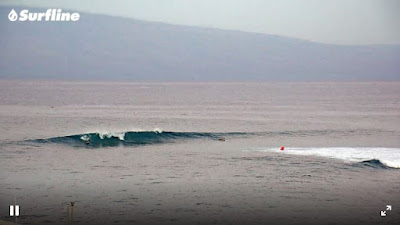 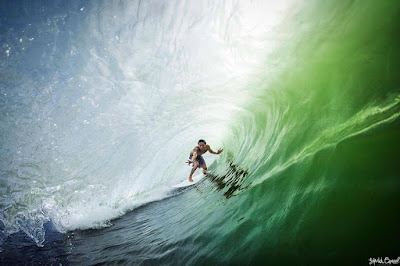 This is a good week for downwinders, here's an inspirational 14 minutes video.

Minimal southerly energy at the buoys, going to be a very small day. Check the Lahaina webcam if interested, for size, conditions and consistency. If Eddie had to go all the way to the harbor to catch some ripples on his kayak, it must really small everywhere else. 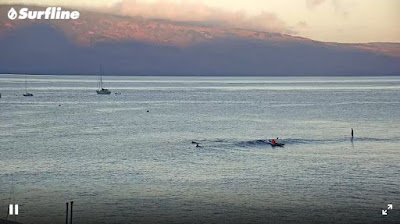 The windswell picked up quite a bit (the upstream fetch has been decent the last couple of days). Small waves at Hookipa, quite a bit bigger on eastern exposures.

Thanks to blog reader Rich for the donation at the beach.

Head waves on the south shore yesterday... if you're sitting in a canoe. 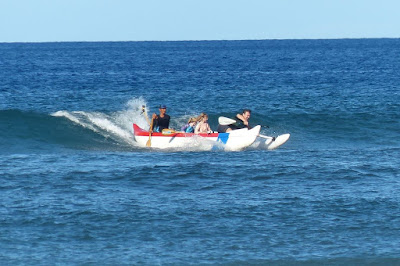 5am significant buoy readings and discussion.

Small energy at the buoys equal small waves on the webcam, but there's still some occasional gems when the 13s set hits. Check the Lahaina webcam if interested, for size, conditions and consistency. 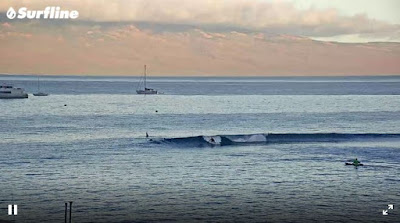 With those numbers, I'm gonna call flat everywhere on the north shore.

Wonderful conditions all morning on the south shore. I had three sessions of three different disciplines and they all ranked pretty high in the fun scale.

If you're one of the 67 people that watched my quick review of the Gofoil GL120, you might remember that at the end I say that I needed to try it on a small day to decide if I want to sell my 140. Well, the small day came and the plan was to do half sesh on the 120 and then change to the 140 to see if it allowed me to have more fun. Never needed to do that, as I was having plenty fun with the 120, even on small waves!

The trick to keep it moving. Notice that in the video I never go straight, always going left or right and putting it "on the rail". Those little left/right surfing style pumps (as opposed to the up/down foiling style pumps), not only help to create speed, but are also fun and give me a feeling similar to shortboard surfing. That was also facilitated by the fact that I was using the original Gofoil 24.5 mast, which is way more flexible than the later longer wider thicker stiffer heavier slower 29.5 (which feels like a longboard when I try to do the same).

I normally use the 24.5 with a 3 inch extension, so that the total length is 27.5, but yesterday I went out at pretty low tide, so no extension. The downside of the short mast (specially if you're used to a longer one) is the fact that you overfoil more often (a couple of times in the video). I use the 29.5 when it's head high or more, as it offers better control at high speed (and less overfoiling). I also prefer it for winGfoiling and winDfoiling.

Notice also how on small waves, you need to be more right on top of the crest (where there's more power) rather than dropping all the way in the trough (which you can do when it's bigger).

Btw, foiling on waves is about 10 times more fun that it looks.
Btw2, not selling the 140 just yet, as it might be better for winging downwinders (Dan Taylor style), so I need to try that first. 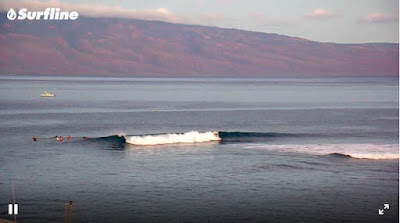 And here's a short period set at the Breakwall. 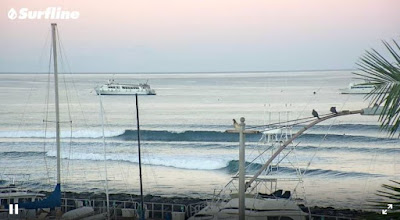 This ridiculously beautiful photo was taken by Ben Thouard. 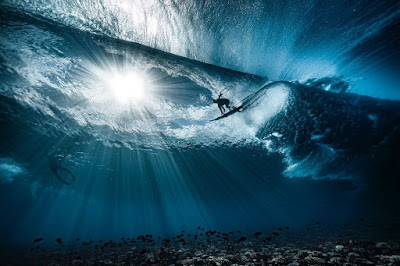 2.4ft 13s is enough for me to drive south again, specially considering the nothingness of the north shore. Check the Lahaina webcam if interested, for size, conditions and consistency. 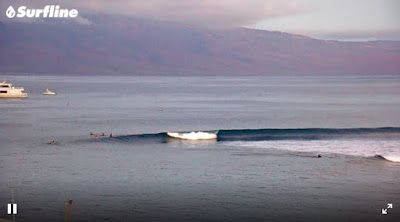 Another day of waves on the south shore yesterday, this is Pat eyeing the line. 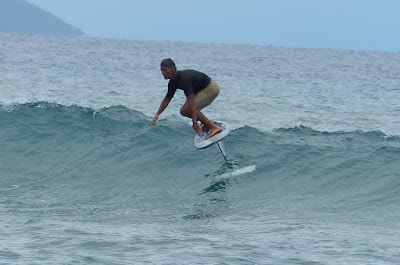 South swell down to 13s, but 2.7ft at Lanai should ensure some waves also today. There's also SSE energy in the water, for some reason the West buoy shows it best. The source is the blue (angular spreading) fetch in the first map of the collage below (June 27 through 30). The other three show the small low in the Tasmans Sea that should become the main source of energy starting tomorrow. Nothing big, but enough not to go flat.

Check the Lahaina webcam if interested, for size, conditions and consistency.
5.30am update. The later buoy readings of the remaining south energy are quite smaller. Webcam shows small waves.

Wonderful day of surfing on the south shore. Shot of the day goes to brother Ulli. 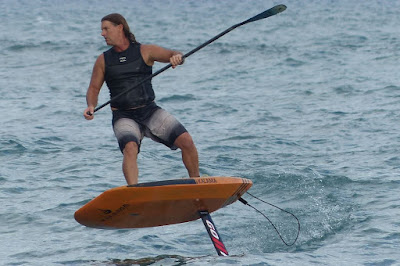 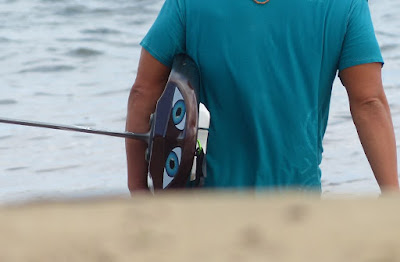 More foiling talk, this is a short review of the Gofoil GL120. After shooting it, I went to Hi-Tech and bought one (they have a few more in stock).

6am significant buoy readings and discussion.

Wonderful numbers continue at the buoys and wonderful waves continue on the Lahaina webcam (check it if interested, for size, conditions and consistency). 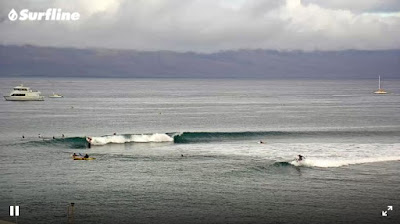 The good direction and the relatively high period of the windswell continue, so there should still be small waves at Hookipa, bigger on eastern exposures. I heard Pavils was shoulder high yesterday, might be similar today. Sorry, I know it's around the corner, but with waves like the one above on the other side, I can't be bothered to even go check.