Goodness, what a stretch of good sailing!

The wind has been offshore, strong and gusty, but despite that and mostly thanks to the gust absorbing capability of my 4.2 Superfreak (since this morning, there's also a 3.7 in my car!), I managed to have fun!

Take yesterday, for example.
As you can see from the photos of this gallery from Jimmie, the mix of a NW ground swell and a ENE windswell provided some really fun head to mast high waves to play with!
The wind was horribly gusty, but thanks to the very offshore direction there were some really clean faces!

This photo was taken by Norm and it's from this gallery. How's that wave?

Today the ground swell was gone and it was mostly windswell. Still occasionally head high, so very fun in my world.

I took a few photos between sessions and the one of the day goes to Levi who is back after a small injury.
His tweaked aerial is for sure a trademark. 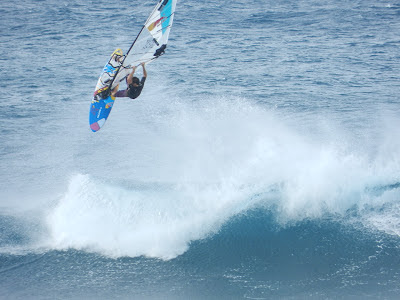 
The late session started to look extremely good (the wind was dieing and I had switched to a 4.5 Firelight), but, as it's always the case at Hookipa, the surfers showed up.
But I live a few hundred yard downwind and so I sailed to the neighborhood reef. It's a bit of a hassle when I do this, because then I have to go back to Hookipa on the bycle to get the car. But this time it's was totally worth it! The windswell provided clean open head high faces and the lip was extremely hittable.
I sailed good and that's always a great feeling.

Now, a few videos I just saw on Facebook.

This one shows thousands of dolphins swimming and jumping around a boat.

One day I was sailing on the west side with my friend Oly. Oly from England, to be precise...
At one point he sailed next to me and shouted:"there's thousands of dolphins out there! Come check it out!!!"
I followed him and he was right. We actually sailed in a situation like the one showed by this video.
Memorable.


Levi is an amazing sailor. But even for a guy like him, sticking two moves like those on the same wave totally calls for a claim. A well deserved one!


Joao Marco Maffini is the son of an italian friend of mine. He grew up in Maui, he's sixteen and that's how he surfs.

Posted by cammar at Wednesday, February 29, 2012 No comments:

First of all: I just found a bunch of other photos I took (including some whale ones). No time to upload them, come back tomorrow for an update.

It was another day of gnarly conditions at Hookipa.

Of course, the good guys make it look good no matter what. Photo of the day goes to Mark Angulo. Photo of the day made by me, I mean. At the end of the post you'll find a couple of stunning ones from Jimmie Hepp... 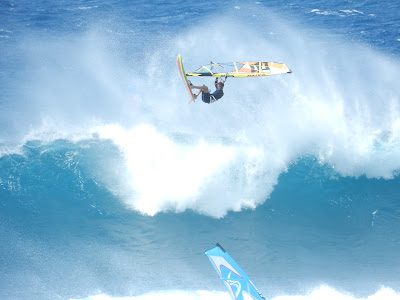 My day started with a short surf session at Paia Bay (it was more catching up with an old friend than surfing, really) and another winning Napoli game watched together with a fellow Napoli fan.
BTW, here's an article that defines Napoli as the coolest soccer team in Europe!

Right after that I went to Hookipa around noon. The transition from Lavezzi to Robby Naish was a lovely one to experience. Especially because this time I was actually in the same field of play of the greatest windsurfer of all times. That's always a special feeling.

When I pulled into the parking, what I saw were once again pretty gnarly conditions. Very strong and gusty easterly wind, a long period ground swell completely brutalized by the chop and the windswell running through it and some occasional mast high bombs.

Knowing that Kanaha would have not offered much for my high standards (sorry, as someone called me today on Facebook, I'm a picky fucker...), despite all of the above, I rigged my 4.2 and went out.

Here's the iWindsurf.com graph that shows the wind (in mph) at Hookipa today. The sensor is on a house in Kuau, so I think it actually registred a lot less wind than there was on the outside.
I believe I went through some gusts that went up to 40 knots. It was brutal.
Notice the ESE direction. East is already offshore. ESE is very offshore.

Nonetheless, some waves offered sections that were actually ridable. I somehow managed to have some kind of fun, but it was mostly because of the challenge.
Those days in which everything is perfect, smooth and easy are great. But, despite all my whining, lately I started to thoroughly enjoy also the less than ideal conditions. In other words, as long as there's waves, I'm happy.
This photo was taken by Norm out of this gallery. Thanks a lot for that! 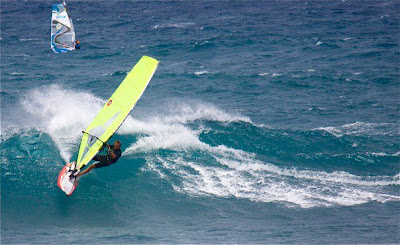 And before we start the photo show, here's what Robby Naish has to say about the conditions.
Sorry, it was the first interview I shot with the new camera. Next time I'll try to shield the microphone with my hand.

You guys believe me now?!?!

Around 4.30 the wind seemed to have eased up a bit (maybe gusting to only 30 knots), and, not sure where I found the energies, I went out again.
It got progressively better and I ended up having quite a lot of fun. "Just" one hour though... can't sail till dark at Hookipa because the surfers enter the water and claim their fair share.

More of the same for the next few days. No complaints, there's waves... 'kin wind!

Wait a moment! Just found this sequence on Facebook.

What are Jeff Henderson and his stepson Dax up to? 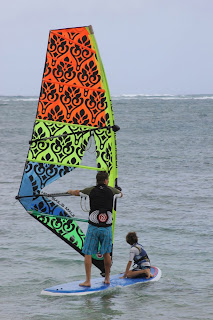 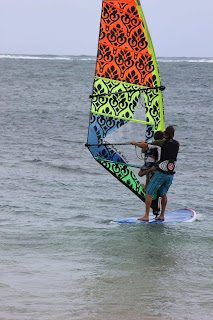 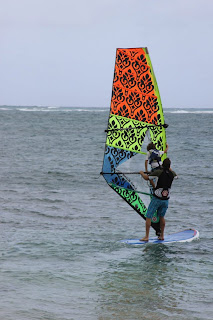 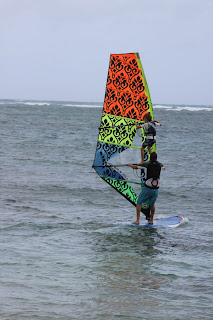 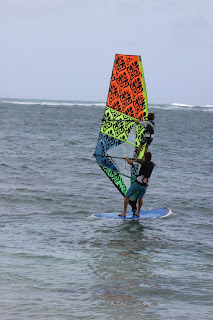 This also gives me the opportunity to point out that Hot Sails Maui sent me a new banner for the blog with a link to their Facebook page.

Which in turns gives me the opportunity to point out that another blog advertiser is the American Windsurfing Tour. Their first contest is coming up in May in California. I'm already signed up for the Maui one. Check out their webpage and sign up for a contest. I guarantee you it's a lot of fun.


Wait another moment! Another facebook gem. This is my friend Marcio, charging the left at Jaws in the same day (feb 26) of 2008.
That's how Hawaii should look at the end February: big waves and no wind. No wonder Robby called it spring instead in the interview...
Amazingly ballsy drop, by the way. 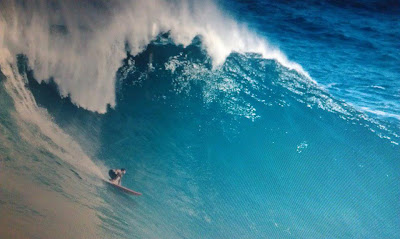 Wait another moment!
Jimmie Hepp just published his first gallery of the day and I took three photos out of it.

This is really it for tonight. Not sure why, but I feel kind of tired and slightly sore...

PS. The Gold Coast Pro is on and wecasted live here.
Posted by cammar at Sunday, February 26, 2012 3 comments: