my unsatisfying relationship with Honolua Bay

Honolua bay is for sure the best wave in Maui. Not for me though.

There's two things that makes me not prefere it. The second one clearly is not her fault.
1) when it's good is always crowded.
2) when it's good (and crowded) I'm not confident enough to sit in the middle of the pack (that means in the right spot) taking off on those steep walls on my back hand. I'm an poor backside surfer (because I don't practice enough going right).

But today I surfed it and the place is truly beautiful.
Gas bill was 13 bucks.
Worthy it?
No.

BTW, I didn't catch any of those beautiful waves you see below. The reasons, I just explained. 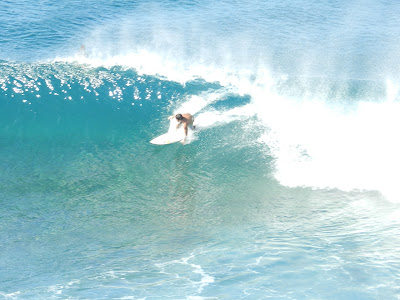 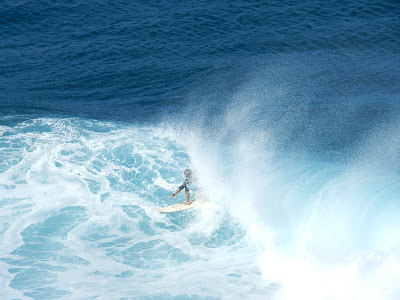 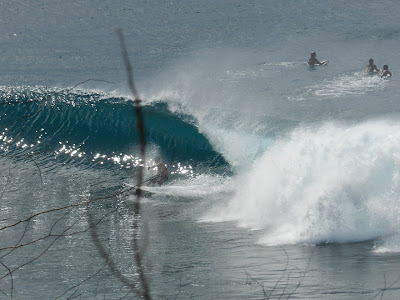 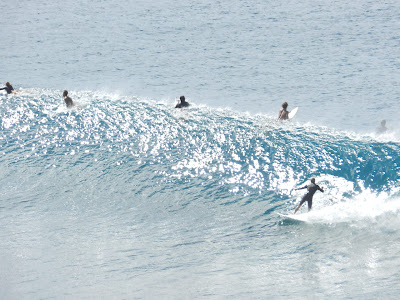 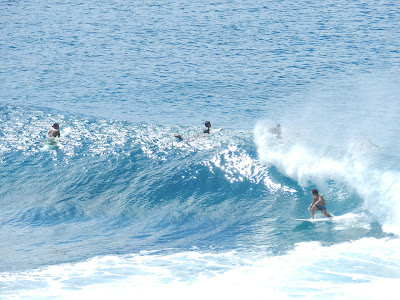 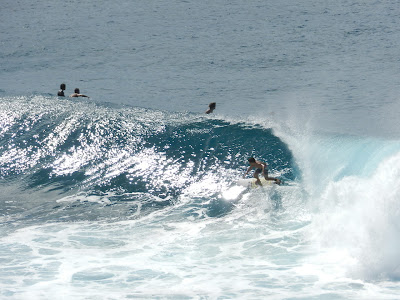 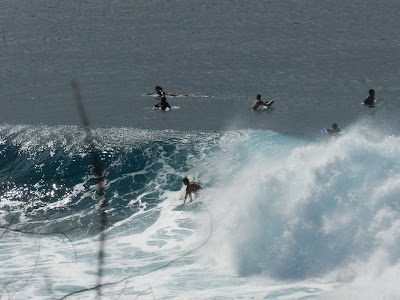 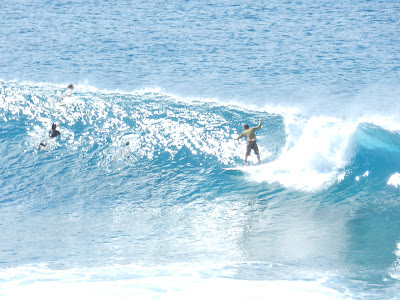 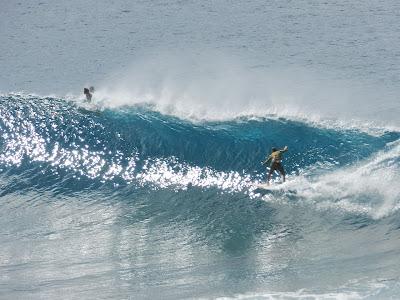 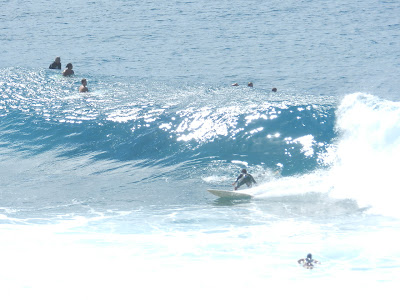 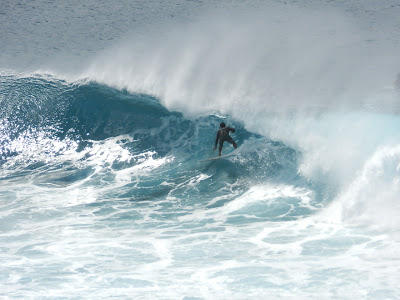 PS. Those photos are from sets that I saw before and after my session.
When I was in the water, in two hours there was only one set like that. And I was in the wrong spot.

PPS. This is Browsinho at Jaws today... Holy crap! 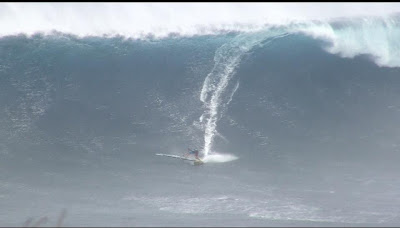 PPPS. Just checked the long term weather maps. The whole week looks very good (that means, there's waves). This one is forecasted for midnight of Monday February 6. Seen the close proximity of the very long fetch, I predict that the related swell to be another extra large one. Jaws will go off again. Doesn't look like wind this time.
It's deep winter in Hawaii. I don't want to be anywhere else.

the luxury of deliberately choosing not to sail...

Well, my hopes of bad conditions in order to take a full day of rest were sure fulfilled today.

As usual, when most of the readers will see the photos will go:"what the hell is he talking about?!?"
Guys, I know that this would have been epic for most of you.
But:
- these are the best sailors in the world and make it look good also when it's not.
- I'm not most of you and I'm extremely spoiled and picky (and in need of a rest).

Hookipa looked horrible the whole day for my taste. Strong wind, huge chop, shapeless waves. I had a 9 out of 10 session the day before, why bother with a session I knew EXACTLY was going to be a 1 out of 10?

So I took a bunch of photos instead. Here's the two best ones.


Chronological order from now on.


Tomorrow there's a large swell on the rise but the wind will keep cranking so it will be very choppy again. I have no expectations whatsoever about tomorrow.

Nonethelss, I do see some potential epicness in the immediate future. That's a good feeling.
Posted by cammar at Sunday, January 29, 2012 1 comment:

mamma mia, what a session!

But then I went sailing and the feeling of the sessions took over. I still think Kai is amazing though,
and I'm going to start this post with him.

Some time ago I posted his video "four in one" and one reader commented that the video was lame.
In my opinion, Kai is the best ocean athlete in the world (at age 19!!!!) and NOTHING about what he does and says is lame for me.


Today is the last day of our hawaiian summer. This south swell is one of the largest in the last 15 years... and I was part of it. How lucky am I?


Our world measures us in rankings and world titles. There’s so much more out there than that!
Somebody might have thought about those words for him, nonetheless not a single one of them is false.
I tell you more. I'm not a kiter (even though I wish I had the time to learn... my fourth discipline is work instead... LOL!), but other than that I could second each single word he said.
In my car I ALWAYS have:
- a windsurf board (and three sails)
- a surfboard (often two)
And when I think there might be the right conditions, I also load my SUP on the roof rack.
I am an ocean athlete too adapting to the elements. The things I do are not even remotely comparable to the ones Kai does, but I can identify myself in what he says. He's a total inspiration to me.
Allright, said this, here's a few pics.
When I got to Hookipa, Kai was the only one out. Photographers, videographers. He makes a living out of what he does in the water and that's part of his job. Call that lame! 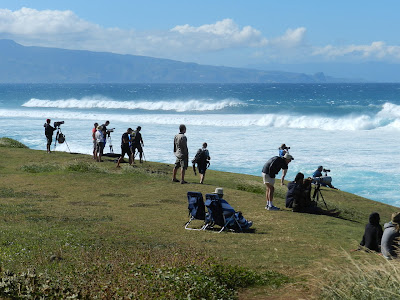 And now my session.
It probably was a 9 out of 10. Thanks to the high tide and to the westerly direction that limited the size, the waves were doing a very beautiful thing: peaking at the bowl and tapering down in size all the way through.
At the bowl, there was some chop, but after that first turn, it was smoother and smoother.
Here's my best wave.
A mast high bowl is forming just downwind of me and I see Glenn sailing out downwind of me.
A friend watching you is always an extra motivational factor to try to rip a little harder, so, despite the chop, I carefully bottom turn and go all the way up to hit the lip.
It's not a throwing lip by any means. It's a rather mushy one, but it still was a mast high wave and that, at my skill level, definitely got my heart going...
Now I'm setting up my second bottom turn and Glenn is about to hit the ramp for a jump a few meter downwind of me.
The section is now logo high and and I'm going up the face to hit lip again. Now, try to picture this amazing vision I'm about to have.
I'm looking at that lip that I'm about to hit and in the background there's Glenn up in the sky at the apex of his awesome backloop, looking down to spot his landing.
Once again, I saw that while hitting the lip of a logo high wave.
That was one of the best windsurfing moments of my life, for sure.
Good, that makes up for that super shitty session of last Sunday...
I made three more turns on that wave. I hit the lip at each single one of them, also because the wave tapered down to head, shoulder and finally waist high, so I could be as aggressive as my skills allowed me.
When I kicked out, I was screaming my joy out of my lungs.
Mamma mia, what a wave that was...
The past few days instead it has been glassy surfing paradise and I surfed at least twice a day.
December sucked. January was amazing. Unfortunately I missed the best surfing week of the year (so far) because I was sick, but I sure got the rest of it!
I'm so spent that this morning (Sunday) I couldn't force myself to go surf. I did a laundry instead, and my arms where hurting while hanging the clothes on the wire... I definitely needed a morning rest!
The swell went down a lot in size and the today might be an up the coast deal. That is unfortunate, since the westerly direction is not the best for those reefs.
I'm at the point that I hope it's gonna suck so that I can have a full day of rest... LOL!
For sure I'll take some photos of the windsurfers at Hookipa (which will be sailable and sailed), so stay tuned for a post.
PS. Volcom Pro Pipe ON now.
Posted by cammar at Sunday, January 29, 2012 5 comments:

Just another beautiful day in paradise

My sessions. Kanaha in the morning was just beautiful. Unfortunately also inconsistent, and with a hord of standuppers and longboards my choice of riding a 6.6 was probably not the best. But I got my waves and I had fun anyway...

Second session was on the standup, but it was a little onshore and bumpy.

Now a bit of gopro action.


Couple of more days of glassy waves ahead of us. No complains about that!

Oh, Jimmie Hepp just posted this nice photo of me on my FB wall. Thanks Jimmie! 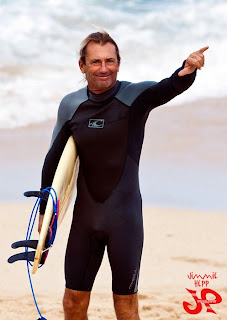 PS. Jamie O'Brien got bored of getting barreled at Pipe and came out with a feature that I really hope no one will try in a crowded lineup in Maui... Check this out!
Posted by cammar at Wednesday, January 25, 2012 No comments:

This photo report is from Sunday, most likely my worst windsurfing session ever.

The wind was gusting 10 to 30 and I just can't sail in those conditions. I mean, look at the graph from iWindsurf.com! Steady 20 mph between gusts and lulls. Pure shit in my book.

So I sat all day and enjoyed a beautiful sunny day at the beach, while taking some photos from a different angle. Here we go.

As I posted on Facebook, "if Maui was always this windy, I'd be out of here in no time. Fortunately, it's not!".

In fact, Monday I enjoyed two glassy morning surf sessions before work and today (Tuesday), I surfed in the morning, worked, sailed (in beautiful super light wind conditions with only two other guys out most of the session), and surfed again.

After that nasty flu that made me miss the best surfing week of the year (so far), I can officially declare that I have all my energies back. I still cough and have to clear my throat once in a while, so I'm not lowering the guard and the intake of all the natural immune system boosters, but I got my energies back and that feels awfully good!

Tomorrow the waves will be bigger, which is not a thing that I necessarily like, but I can guarantee you that I will catch some. Well I'm actually off, so make that.. a lot.