Rain and no wind, but still some fun waves to ride here in Maui.

I took this photos in the late afternoon yesterday at Hookipa. 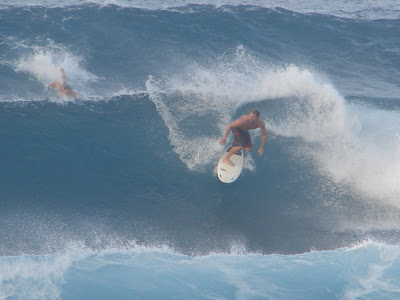 This kid was ripping. 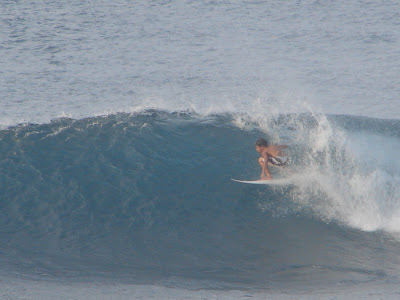 I, instead, sucked so much that in my morning session in a paddle-intensive spot I got caught three times on the inside by the quickly building sets, paddled for one hour without interruption and went back in with the astonishing wave count of: zero.
Sure enough it was a good workout. 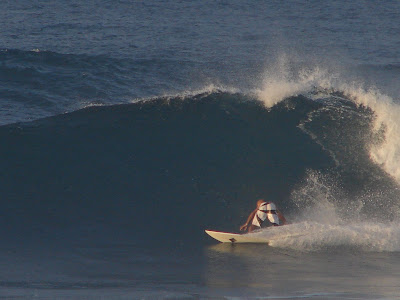 Back home I tuned in the Pipe Masters and that's the best surf I did that day...
Mister Kelly Slater was enjoying a big swell with some buddies at a secret spot on the Caroline Islands, got texted what day and time his heat was and arranged to fly to Oahu just in time for his first heat... 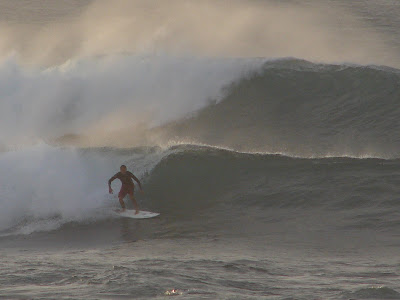 Was it worth it? I'd say so... he won it. Not only the first heat, the whole contest.
Here's how he destroyed the opponent in heat 3 of round four of the final day of competition.
Notice some kind of kamikaze fish (a small manta ray, I'd say) jumping out of the water and into the lip at the second 10 of the video... pretty nuts!

On that same page, you can watch all the heats of the last day.
Kelly's heats are:
- quarter final 2 (great match up with Pipe specialist Jamie O'brien)
- semi final 1.
- final.
In the semi final Tim Reyes combo-ed Kelly with something like 7 minutes left. That means that Kelly needed not one, but two really good waves to advance. Under Tim's priority, Kelly sneaked a Pipe wave and scored a 9 and paddling back out he got a Backdoor right and scored a 10. Everything happened in 2 minutes. And I couldn't catch one damn shitty wave in one hour... 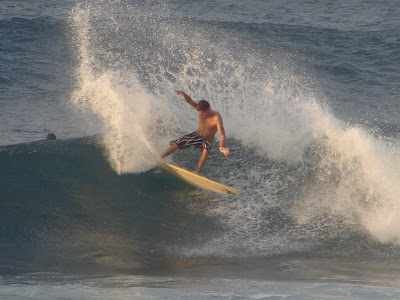 From one living surf legend to another. Laird paddled out almost at dark. If you're learning to standup paddle surf, this photo is a "how to paddle" clinic: reach as far forward as you can without leaning forward too much, keep both arms straight, slightly bend your knees. 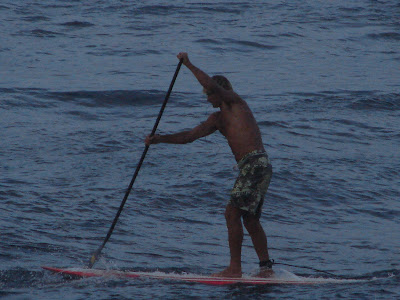 Carbon paddles are notoriously stiff. Not for Laird. 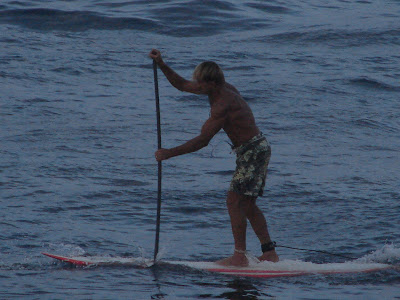 In a couple of days I'm off to Italy.
I don't like going back to Italy. Specially in winter time, when there it's cold and here it's wavy.
FORTUNATELY, the forecast for the coming week looks hoorible for Maui. No good wind, way below average surf (!!!) and plenty rain. Stoked! 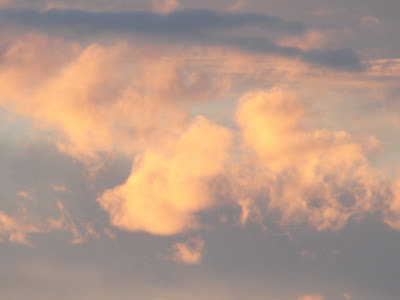 X-mas & new year u will celebrate in good old europe;)there are worster travels;) wish u good trip & and I hope u will come back to maui;) because I love ur maui-reports.

take care, merry x-mas & happy new year for u, so for all dudelinas & dudes;)

Behave yourself in Italy with your Mama and Papa - they'll love to see you even if you don't love Italy.
Happy Christmas and New Year

I used to also wish for lousy conditions when I leave Maui, but then I decided that just because I wasn't around why should my friends have to suffer too? So now I do the opposite-hope it's great and all my friends are out ripping it, and that when I return they'll still be stoked on the awesome sessions they had. I think that's a nicer outlook on it.

OK, let me make it clear here: for me Christmas and the new year thing are man-made bullshit, so I won't wish happy stupid days to anyone.
I do wish happy life every single day to everyone instead, but that's kind of silly too, since if your life is happy or not depends mostly on you.

Said this, thanks Aq and Anne.

Anon, great outlook. I'm happy too for my friends if they score good conditions when I'm off island, but honestly and selfishsly I'm happier if conditions are bad so I know I'm not missing much...
Statistically, in fact, good and bad conditions continously alternate during a season. So if they're bad when I'm not here it's more probably that they will be good when I will be here...
What can I say, you're nicer than me!

There are a few good things out of a trip to Italy in the middle of winter: family, food, wine and that incredible rush of happiness I get when I get on the plane that will take me back to Maui...
As usual, I'll try to appreciate the positive things and ignore the negative ones. That'll make my trip enjoyable and the end of it even better.

...IF I'll be able to avoid the bullits!
(sorry, couldn't find an english version of the news)

I once again have to ask myself....is Laird even human?

Cammar...babelfish provides translation of webpages. Not perfect translations (actually pretty funny sometimes) but enough to get the idea.
http://babelfish.yahoo.com/

Enjoy your Italian holiday - only 15 days until you return to Maui!

I knew I should have gone to the Pipe Masters. We were going to do the superferry thing and stay a few days to SUP as well as watch.

I did go to the Big Brother/Big sister event at Launiopoko, Diane got some good photos. Posted them in an article on Ke Nalu. there's also a gallery link in the article that connects to all the photos we shot. Anyone that cares to can download from the galelry. Laird, Dave Kalama, Robbie Naish and a bunch of other ace surfers and windsurfers were there teaching kinds to SUP. Great fun.

As I'm learning through my own surfing attempts:

Sometimes you get the waves, sometimes the waves get you!