No shot of the day, this is Titouan Galea catching a "little" air on his wing thing. 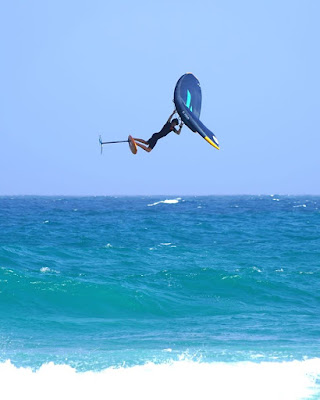 4am significant buoy readings and discussion
South shore
Nothing at the buoys, check the Lahaina webcam if interested.

3.4ft @ 9s from 18° (NNE)
3.1ft @ 11s from 337° (NNW)
NNW energy on the steady decline, with a pinch of NNE energy on top. Below is the collage of the maps of March 13, 14 and 15. On the first one I put a red arrow on what was left of the NNW fetch associated with the low that shut down the trades. On the other two I put a black arrow to indicate the source of the NNE energy. We haven't seen any major fetches in the past few days, this means this week will be very sub-average on the north shore.
With those numbers at Pauwela, today Hookipa will be relatively small (possibly still occasionally head high) but clean in the early morning (and crowded). A possible alternative with similar sizes could be the eastern exposures.

Wind map at noon (the other ones can be found at link n.-2 of GP's meteo websites list in the right column). The no wind days are gone, we have strong ESE winds ahead. At least, the early morning should be ok for surfing with that direction.

Just a WNW fetch in the North Pacific, the wave generation scarcity continues.

Couple of fetches down south.

Morning sky. I believe the green color indicates the temperature of those clouds, not the rain.

This is the rain radar instead.