This was a really good day at Hookipa.

The last swell that deserved such a name hit in the afternoon last Thursday.
I hit it with perfect timing, going out at Hookipa from noon to 2 with not many people out.
Then it started to get a bit too big for my tastes (as usual, light wind on the inside) and I sat on the bluff to capture a few moments for you lucky bastards. 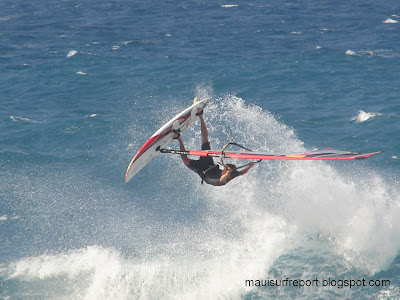 How would you rank the level of difficulty of such a tweaked aerial off the lip? Pretty high, uh?
I don't know if he got a magic board or what, but the man is sailing like I've never seen him before. In particular, that day I saw him doing the most radical move I've ever witnessed... and sitting on that hill I watched a lot of crazy stuff!
Let's see if I can describe it.

Imagine a tubular wave. An imaginary cylinder of water. And imagine a windsurfer inside the cylinder that goes all the way around the perimeter of the cylinder. That's pretty close to what he did.
The wave was mast high and the lip started to form a heavy barrel in front of him.
He bottom turned, went straight at the already falling heavy lip, destroyed it with the bottom of his board facing up (towards the sky) and continued the rotation for the fastest wave 360 you can imagine. He landed in full speed and carved another bottom turn right away... like if he was in a cylinder!
And I saw all this while sailing out 50 yards downwind of him... unreal.

Here he's doing an upwind Taka (or whatever that's called). Piece of cake compared to what I just described. 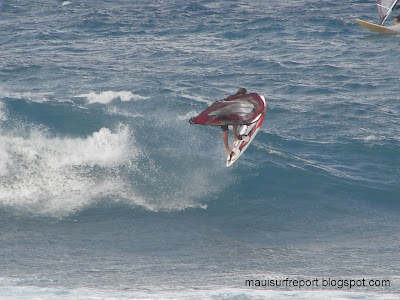 And here's an ordinary (for him) one hand aerial. 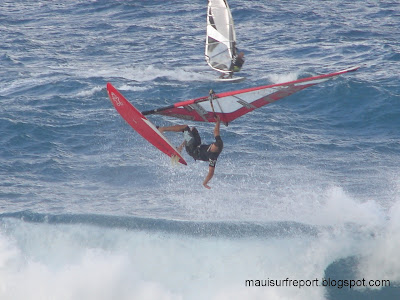 Then we got uncle Robby in the late phase of a pushloop. 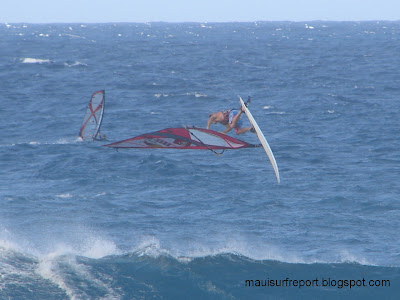 And Robby again doing one of those jibes on the wave that he keeps riding backwinding... I love that move and I tried it a few times.
You know... I didn't do too bad... actually very close to making it a couple of times. I might even be able to do it one day! That day I'm going to be (particularly) happy, because I think it's really cool. Sorry, let me rephrase it... I FEEL it's really cool. 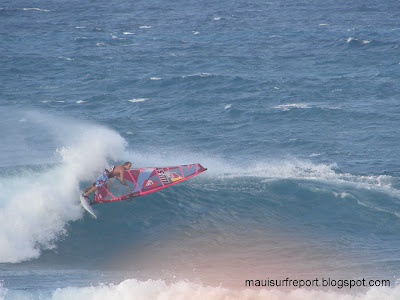 And this is a french guy, who always comes in winter vacation and he's a smiler who respects the priority... as such, I like him. Even if I don't know his name.
That's a big wave. 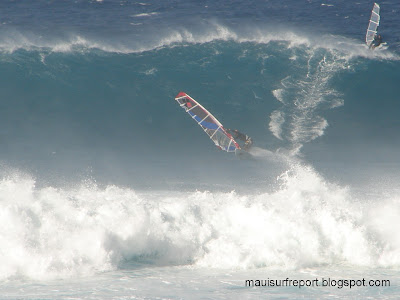 More photos in this slide.

The day after the waves were smaller and after that it has been pretty much just windswell. Kind of fun, actually. For three days it has been head to logo at Hookipa with not too many people out... but nothing particularly clean or organized.
Today it was a lot smaller (at most head high) and this week is going to be pretty much the same... pretty bad for being winter.
Fortunately there's light at the end of the tunnel, since everybodys' favorite metereologist Pat Caldwell just posted that

models show the jet track returning to a more seasonal position of about 40°N latitude with a mostly zonal pattern. This should lead to a series of moderate to near high episodes from NW to NNW starting 12/23 with arrival spaced about 3 days apart. A well above average number of days of trades is expected relative to most years for the last half of December.

I've always admired the jibe-to-backwinded wave ride that Robby seems to have been doing forever. Must try that soon!

Meanwhile, if you don't get the trade winds, you can always try some radical lightwind sailplay. It would be cool to get this guy in the waves to see what he'd come up with.

Loved the photos Cammar. When I see Kai Lenny out there in conditions that scare me.... I'm in awe.

Puffin, you want to try first it on flat water.
Last summer, I must have been atrociously bored and in a flat windy day I went to Sprecks and tried the flat water 360 with the feet in the footstraps for a couple of hours. Kind of close to complete it, though it's quite hard with the feet in the footstraps. But I learned to transition from the front to the back wind. And when you do it on a wave it's actually easier.
Speed is your friend, got to be fully planing.

I don't care about strong wind freestyle, but there's something about light wind freestyle that I really dig. Too bad I don't have many days to practice that in Maui...
:))))

Bob, I agree. All those kids are amazing.