Who would have thought that the Kahului harbor would become one of my favorite places where to spend a day off! Three fun sessions of three different disciplines, last one was thanks to Casey Hauser that let me borrow his winDfoil (as opposed to winGfoil) gear. Here he is carving out some smooth lines on the perfectly sloped harbor waves. 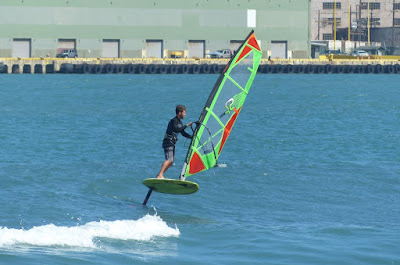 Brother Randy always charging, even though this relatively steep drop ended up in an overfoil. All it takes is the tip of the foil to surface (indicated by the red arrow) and the loss of lift is complete and sudden (just like a spin out while windsurfing). 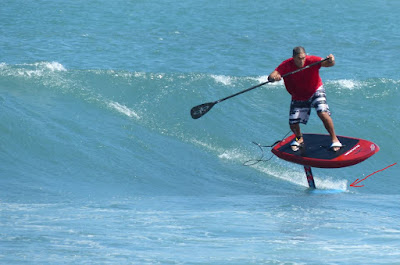 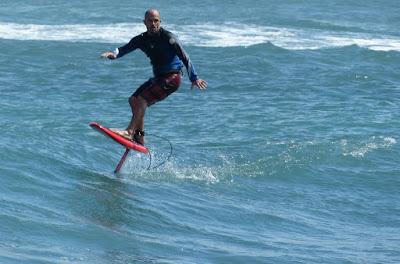 The Nazare tow in challenge has been given yellow alert for a very likely day of competition on Tuesday Feb 11. Kai Lenny and Ian Walsh left Maui yesterday evening, this site has the list of the competitors.

4am significant buoy readings and discussion
South shore
No southerly energy at Barbers, but that's likely because it's masked by all the other energies. There were waves on the Lahaina side yesterday and there should be also today. Check the webcam if interested.

NOAA NW Hawaii buoys 51001 and 51101 mid day Friday 2/7 show the 17-21s forerunners of a new event. It was generated by a storm- force low pressure system that tracked east from the Kuril Islands 2/2-4. Seas grew over 35 feet. The fetch covered the 290-330 degree band with dominant energy over the 315-325 degree band. This event should be filled in by Saturday morning, peak mid Saturday above average then slowly drop into Sunday when a new remote event is due late in the day.
The next low in the series west of the Date Line unfolded 2/3 and became storm-force 2/6-7. The fetch covers 290-330 degrees with strongest winds over the 310-320 degree band. Models show the pattern holding gale or stronger into early Saturday with the head of the fetch about 1800 nm away, then weakening into Sunday.
Long-period forerunners are due late Sunday. This event should be filled in by Monday, peaking late Monday above average centered from 315 degrees, then slowly dropping into Wednesday.

Below is the collage of the maps of Feb 2 to 6 that will help follow. I numbered the fetches of the two different lows 1 and 2 for your convenience. If the picture is too small on your screen, you can click on it to enlarge it.

Wind map at noon (the other ones can be found at link n.-2 of GP's meteo websites list in the right column). The strongest burst of NNW wind is predicted around 11am. The good news is that there no wind as I write at 6.20am.

North Pacific has a remote NW fetch (with a much bigger angular spreading one) and the nearby N one.

Also the South Pacific has a directly oriented fetch (red circle) belonging to a much larger one, out of which we might get some angular spreading in a week.

Morning sky. The front has passed and is trailing some cold air behind. 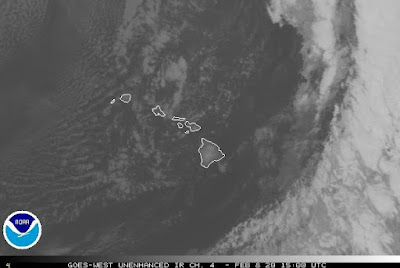