I bet this photo will make many long time Maui north shore residents smile, as they will recognize uncle Joe who moved two years ago to Las Vegas to be with his family. Still doing his things and sending kisses to the passing cars, as he used to do here. 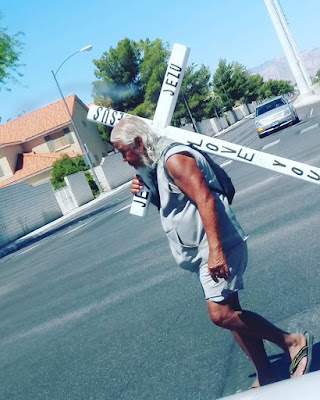 This is my pick of Jimmie Hepp's album of the windsurfing action at Hookipa. I windsurfed too (out of lack of alternatives) and that reminded why I don't like strong wind anymore. 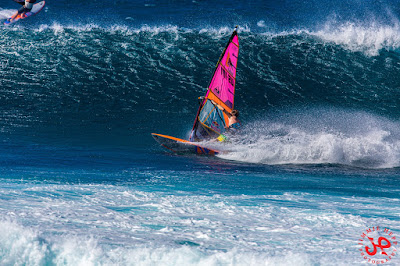 Pauwela
7.1ft @ 9s from 68° (ENE)
NW buoy registers a couple of feet of long period NW energy. That's the low start of a bigger NW swell that will be much more noticeable tomorrow, as Pat Cadlwell describes in this way:
A large area of low pressure formed west of the Date Line 1/30-31. The low pressure occluded by 2/1 with central pressure dropping to 948 mb. Oddly enough the large fetch aimed at Hawaii had much weaker winds than one would guess given the low pressure center. ASCAT satellite showed mostly marginal gales 1/31-2/3 over a wide, long fetch of 290-330 degrees nosing just east of the Date Line 2/3. The low center is weakening as it moves east along the Aleutians at the Date Line Monday 2/3. It is expected to fade out Tuesday.
Wave Watch III suggest a low event picking up Tuesday 2/4 from 290-315 degrees. Better odds by Wednesday morning with surf climbing to just under the seasonal average from 290-330 degrees.
Below is the collage of the maps of Jan 31, Feb 1, 2 and 3 that will help follow.

But, as pointed out earlier, that's more for tomorrow. Today the main energy will still be provided by the close by NE fetches that you can notice in the collage above in the past few days. With that reading at Pauwela, I don't expect to see much more than head high waves at Hookipa (will probably report later), possibly higher on eastern exposures. So, a relatively small day for the season, but with clean conditions for most of the morning.

Wind map at noon (the other ones can be found at link n.-2 of GP's meteo sites list)

North Pacific has the three fetches I circled in red.

South Pacific has a fetch deep down in the Tasman Sea.

Morning sky. Enjoy the sunshine, as a front is predicted to brush the islands on Thursday. 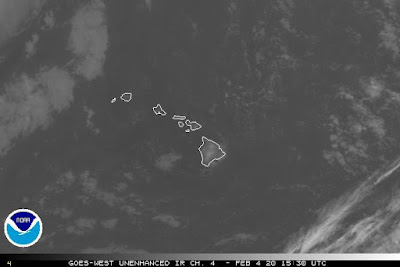