Yesterday's surfing and SUP foiling sessions were another couple of 8's, here's a photo illustrating the conditions of the first one. 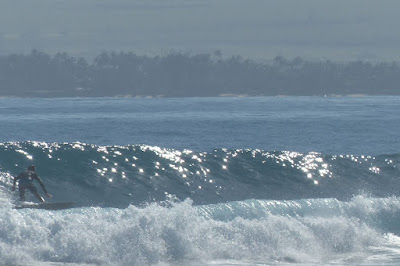 4am significant buoy readings and discussion
South shore
No southerly energy at Barbers, there might be something starting tomorrow as suggested by Pat Caldwell:
A large area of low pressure SE of New Zealand 1/30-2/1 aimed highest seas at the Americas. Low odds for a low, long-period swell locally making for small breakers during the inconsistent sets from 180-200 degrees starting 2/7 and holding into early next week.

The NW swell discussed in the fetch maps collage two days ago is here (5.6ft 13s at Pauwela), but the onshore flow too. The 9/8s NNW period energy at NW and Waimea is due to the local fetch of the front and is about to add locally to the 9s ENE energy still at Pauwela. As reported already from the beach (scroll below this post), the conditions are already very crumbly and choppy due to the onshore flow, which is going to intensify during the day. In other words, a day of crappy conditions pretty much everywhere, unless you manage to find a very protected place.

North Pacific has a couple of fetches embedded in a low NE of Japan and the N fetch associated with the front that is bringing the onshores.

Small fetch deep down in the Tasman Sea won't probably do much for us. 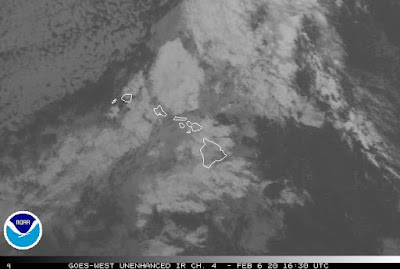