Thanks to blog readers Lucas and Aaron for their donations during the break.

My surgery went well, and the morning calls are now back. Here's a photo from the end of the road that I took on the biggest day of the recent south swell (June 3rd). This was the biggest wave I saw that morning. What a beauty! 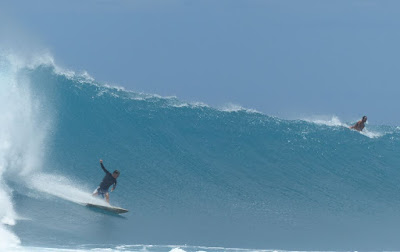 South shore has had fun size waves during the weekend, with some small 18s sets yesterday morning and clean conditions. Now it's down to 15s, which might make the waves peel even better for most spots. Unfortunately, it looks extremely inconsistent on the Lahaina webcam (check it yourself  if interested, for size, conditions and consistency). 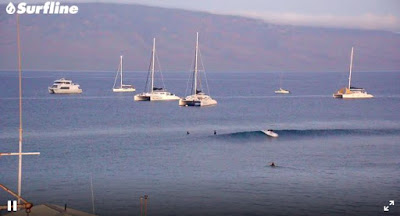 At the moment that camera is only shooting Harbor, without that annoying switching left to Breakwall and back right Harbor, but it might be only a temporary thing. Meanwhile, blog reader Scott sent me the link to this other one that shows Breakwall from a distance. Thanks Scott, I added it to the webcam list.

Small kind ENE windswell will make for tiny to small waves at Hookipa and the easterly exposures. The north shore had a remarkably good spring till last week, now it's entered a summer configuration.
Below is the European model (left) that shows a nice NNW fetch on June 17th, which, if it happens, should provide with a swell around the 20th. The GFS model (right) instead doesn't quite show it and there's nothing on the Surfline forecast, so don't get too excited about it. I personally consider these long term forecasts kind of useless, but I know some of you like to know what's way ahead, so here you have it. 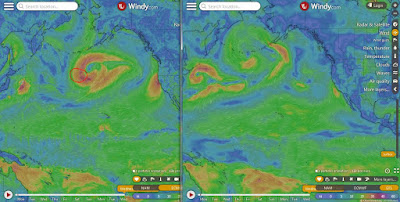