not that horrible, really...

"The forecast looks horrible"... I think I ended my last post like this... well, I guess I got scared by the red (the color indicating strong wind) too much!

In reality, it's been really fun down here. Yesterday's late session at Hookipa was all time, for example.
Logo to mast high waves and clean faces. Glenn, I hate to say, you would have loved it!

Today the wind went crazy again. I went out early on a 3.7 and sometimes even that was way too big.
It was very gusty and that took a toll on everybody's body. Well, I guess on the 49ers the toll was a little bigger... I can barely lift my arms tonight and I'm afraid I'm going to make use of some chemical stuff (read Ibuprofen) to seek some relief... I have a shoulder and a wrist that are definitely sore...

Think if I didn't have a Superfreak! Once again, thank you Jeff Henderson, for such a unique sail.

In between sessions (the late one was killer again), I took some photos.
Shot of the day goes to Boujmaa, who was on fire. I guess strong winds are quite common down in Morocco...
That's high. 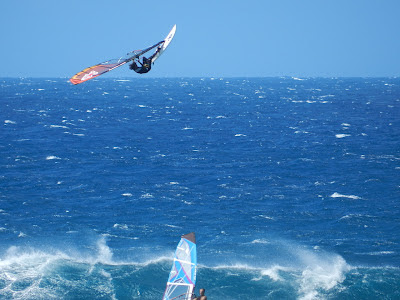 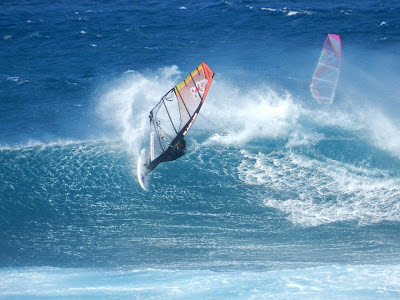 
What else. Judging from the amount of red still on it, the forecast keeps looking horrible... but hopefully it's going to be fun anyway. Big north swell in a week, could be good down at Kanaha.
I'm trying boards and might have find a really good one. Need to keep working on the fin set up though. But I'm getting closer....

Tonight Josh Stone told me:"hey, I saw a hit of you that was just beautiful... on a set wave!"
He might as well be just the nicest guy in the world, but fuck... that feels good!!!
Thanks brah, keep smiling and sharing the stoke.
That's what's all about. That's what I'm trying to do with this blog.
Posted by cammar at Friday, March 16, 2012

Great Pictures! Thanks for the post. It is raining in the SF BAy area and this keeps me stoked!

Great post. Really fun being tuned in! Thanks for taking the time.

Great shots. Pretty interesting that there is a single fin, twin, thruster and quad all represented. A melting pot of board design in one photo gallery.

Giampaolo, THIS BLOG IS AWESOME!!! It's better than "Windsurfing" magazine. Thanks for sharing everything for all us Mainlanders!!! Keep it up brudda!!!

When its sunny and the spray is flying, the action just looks more dramatic.