Another fun day on the south shore yesterday. No photos, here's a video by Dan Taylor of Destination 360 of Austin Kalama SUP foil downwinding in the Gorge .

South swell down to 1.5ft 13s at Lanai, no idea of where that 16s reading at Barbers comes from, my guess is that is a glitch. After another fantastic week of action (pretty uncrowded too, as most people were happy/tired with the big swell of last weekend and/or weren't aware of the other pulses), this weekend the Lahaina side breaks are going to take a... break. Sizes are small at the moment, but cleanness and quality is stellar as usual and there's occasional still over waist sets (like the one in the photo). Check the webcam and decide. 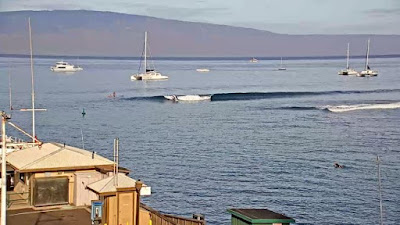 North buoy is feeling the new and expected 10s ENE swell, Hilo starting to feel it too, Mokapu not yet. From the post Buoys to Maui travel times and Maui's shadow lines, we learn that the travel time for a swell from 42 degrees is 13 hours (at 10s). This swell is from around 64 degrees up there, so it might be a little less than that. In the N buoy graph below I circled the swell (blue line, completely different from the orange one which is from straight E, as shown in the lower part), which appeared to be picking up yesterday around 6pm, so it should start picking up any time soon. Still pretty small at the moment, but no wind at all for a while, so there's hopes for a mid morning fun session at Hookipa and the east facing shores. 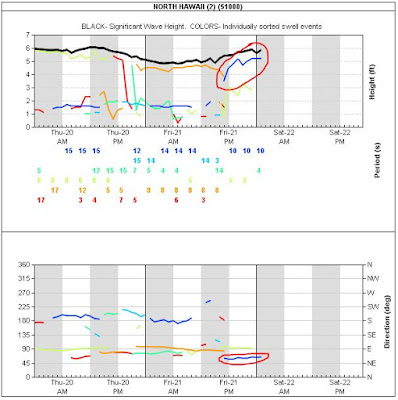 North Pacific doesn't have much.

Today's map is the one on the right. Unfortunately, the fetches maps that are available at the moment don't have the isobars as the old ones (hopefully back soon), so we can't see how far the fetches that are not directly oriented towards us are from the great circle rays. But that strong fetch south of New Zealand (black arrow) looked familiar, so I retrieved the map of June 11 and stuck to its left. That was the fetch that originated the lovely angular spreading swell we just enjoyed in the last three days, so there's hope that this one will do something similar too. As a matter of fact, the Surfline forecast, after calling pretty flat all this coming week, does support this theory with a long period swell picking up in the next weekend (end of June). 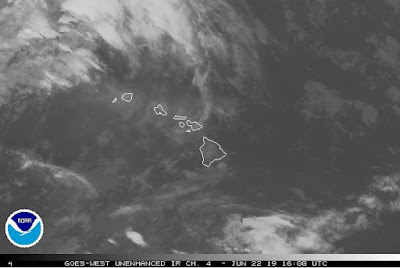