Yesterday I went to Honolua bay.

Along the road a pod of whales was waving goodbye.
See you guys next year! 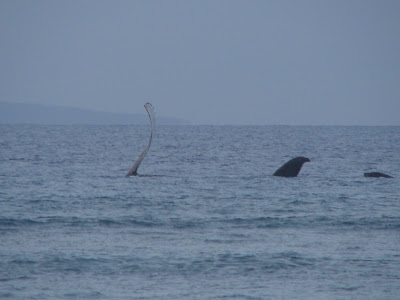 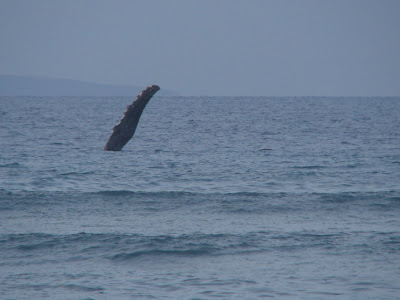 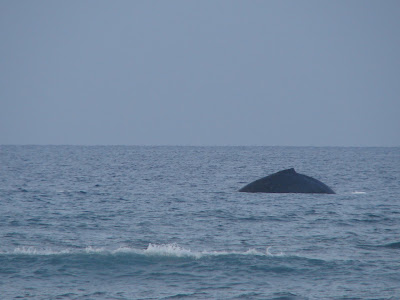 When I got to the bay, it looked really good and midly crowded. I was waxing up when a double overhead set arrived. That's too much for me on my backhand.
Surfing only spots suited for your own skill is one of the most ignored surfing etiquette rules.

I put my board back in the bag and took a few pics before driving some miles back.
There were still two feet of south swell and I ended up scoring one of my favorite lefts of the island. Waist to belly high, perfectly peeling, glassy and with max 5 people out.
I love those days after a big swell when people are surfed out or don't think that the swell is still there or they're simply content with what they just had... give them a week of flat and they would have been all over the place. It's like with women. Abstinence works better than makeup, high heels and breast implants!

I, instead, wasn't quite satiated and eagerly caught a large number of waves. Snapping top turns, cutbacks, even a little floater... when the wave is that perfect, it's A LOT easier to surf good.
Here's the pics from Honolua. What another perfect wave! 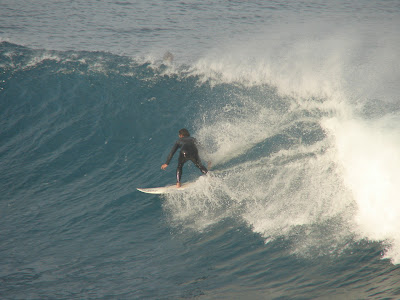 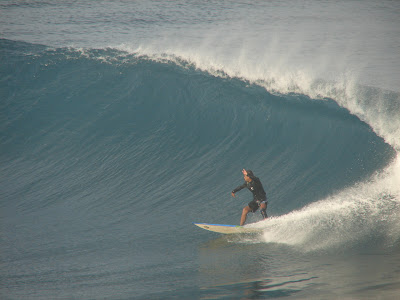 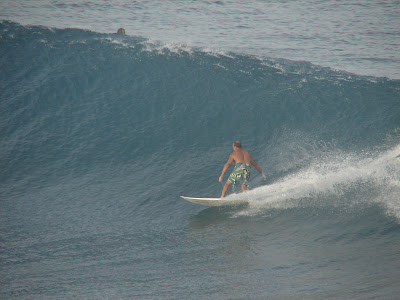 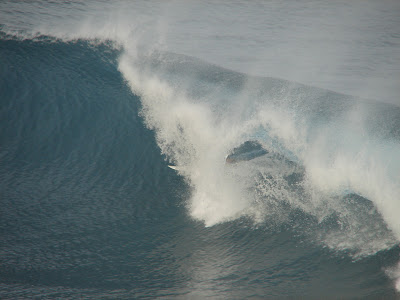 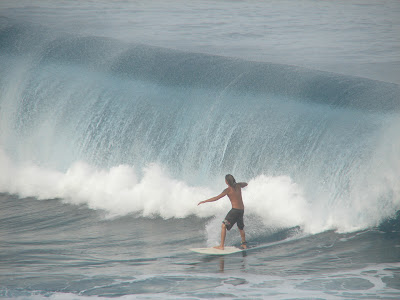 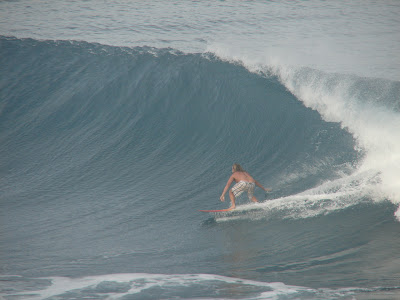 I took those from the lookout on the bay next to it. This is a fairly small set, I didn't want to wait for a big one... 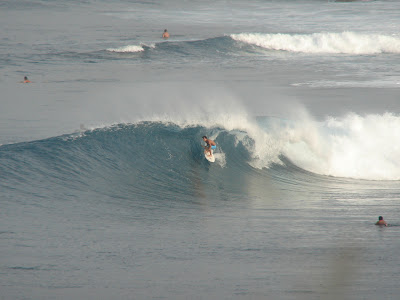 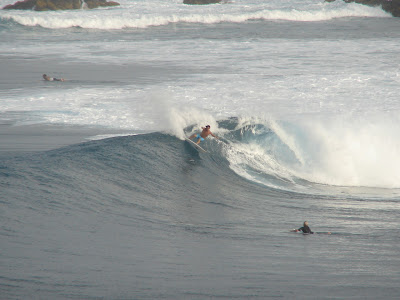 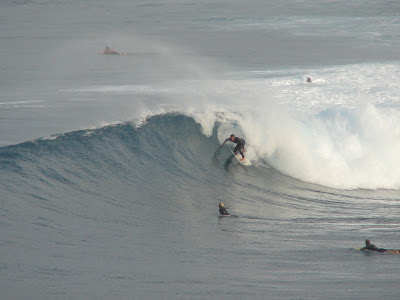 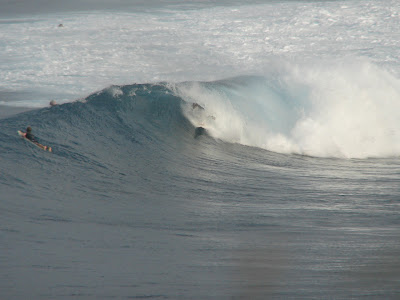 After the surf, I drove back to the north shore where I scored two more hours of great wave sailing. Lowers from 12.30 to 2.30 wasn't too crowded, the wind had just picked up perfect 4.7 and, thanks also to the low tide, the waves weren't too choppy yet.
I even caught a few at uppers. The outer reef was occasionally breaking (super choppy though), but the inside bowl was glassy and going off. A one turn dream... if you know it well enough to predict what it's going to do.
Later in the day, the wind increased to 4.2 levels and that, together with a higher tide, created some big chops. So, thank god!, I spared myself another session.

Hookipa was big and messy and most pros were down at Lowers. Kauli's sailing was off the hook. 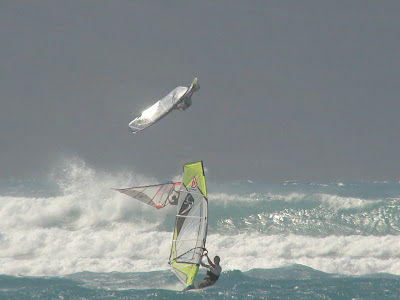 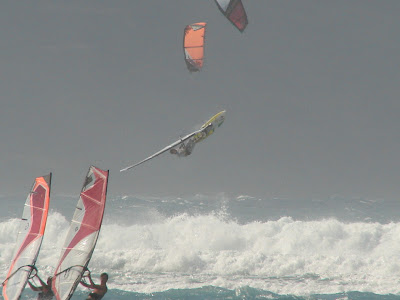 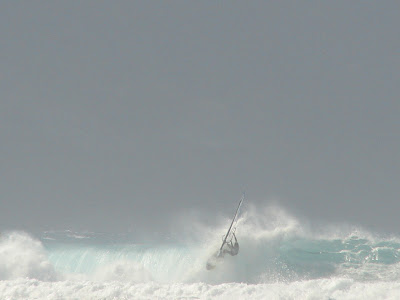 This is Jake (the aerial). I heard he did three backloops on three consecutive waves. That is amazing. I wonder if he felt dizzy after that. 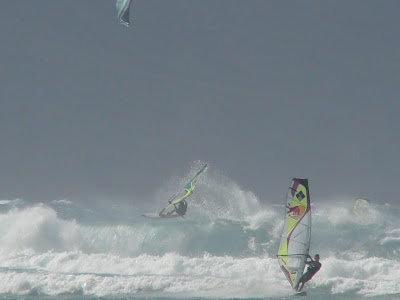 Elena was showing off a bikini that ended up on the cover of Sports Illustrated (I think that's what she said...). 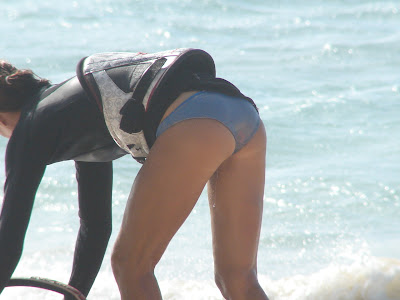 In other words, another gorgeous day (off). I was so tired that I went to sleep at 8.20. Now it's 6.30am and the Kilo Nalu buoy still shows some energy from the south. The weather maps of a week ago that I saved confirm that, so I guess I'll have to jump in my trusty wagon again, before hitting work at 10. What a tough life...
Chapter four of "everything is possible" coming soon!!!

PS. Just changed my mind... I see too much wind around, it probably won't be glassy... good, got plenty other things to do, like packing the Sea Lion for shipping. Congrats to Scott G. who bought it. I'm still selling a 2009 81l twin fin Quatro.
Posted by cammar at Wednesday, March 24, 2010

For me the waves at lowers Tuesday were a touch big and I spent most of the day avoiding the biggest sets. BTW - I have a new goya sail and that's me in the 2nd Kauli picture (lower left corner, left of Kai also on a goya). It was amazing to see Kauli's huge aerials up close. Wednesday (today) the waves were more my size. See www.jaminjones.com for hookipa photos from Tues - really big!

Once a failed to post some brazilian girls on my blog, however, checking the Formula Windsurfing Worlds in Argentina website look what I came to http://www.formulawindsurfing.org/viewer.php?f=100324_1&id=20

OK, it is clear you are an artist. So my guesses are you were asked to film some windsurfing video for a movie or you took up painting.

GP I'm curious, what do you do for a living now in Maui?

I'm guessing chapter six has something to do with this.

Congratulations on a gret blog!