the 2012 Maui Makani Classic and more

Anybody still ckecking this blog out there? Well, thanks for the persistency! 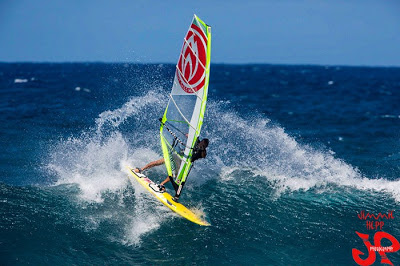 Let me remind you guys that IN ADDITION to posting on this blog I also post stuff on Facebook.
Please, don't friend me if you don't know me. Just SUBSCRIBE to my posts and you'll be able to read them and post comments. Thanks.

At the end of October there was a great windsurfing contest at Hookipa.
Sam Bittner of AWT organized it and the conditions were absolutely killer.
The media coverage was very good indeed and I don't feel like adding my chronicle of the event. I'll just throw there a few random thougths.

Let's get rid of this right away: yes, I won the Masters category. That is another proof that absolutely everything is possible.
Of course I was and am happy, but I'd like to spend a couple of words about this.

Last year I was second, this year first. You would think that this year I'd be more happy, instead.. I am just as happy!
I know this sounds crazy in a country where they teach you that being second sucks and that all it counts is to win, but I see it differently.
I actually couldn't care less about my final ranking. People keep congratulating with me for the result and I smile, say thank you, but deep inside I'm a little bugged by it.
I'm bugged by the importance and meaning that most people give to stuff like this.

I came to Maui in 2001 and I spent countless hours in the water with the only goal to have fun. That made me evolve from the status of total kook to the one of champions of the old farts... so what?
My actual windsurfing skill doesn't mean anything... I believe I was having as much fun back then as I'm having now, really.
So what counts are those countless hours of fun and joy that had the pleasent side effect of making me sail/surf better.

If you look at my result as the expression of those 11 years of fun, then I like it too.
But most people don't look at it like that. Most people would like to win a contest because that will prove that they are better than the others. How much better or worse I am compared to the others means absolutely nothing to me.
Of course, I look at the good guys and get inspired and learn from them, but that's about it.
Of course, I would love to be able to shred like Levi, but I would have no interest in proving that I'm better than him (yeah right!) or anybody else.

I was extremely uncomfortable on the top step of that podium. "What does this mean?" I was thinking while I was under the light in front of a lot of people.
I wish they would notify the winners with an email instead... here's how it would go.
"hey GP, the judges thought you were the best!"
"Cool! Do I get to sail another heat?"
"nope, that was the final... you won!"
"bummer... it was so much fun to sail without anyone out!"

Photo by Jimmie Hepp out of this gallery. Pretty stoked on how I look at age 50, btw... 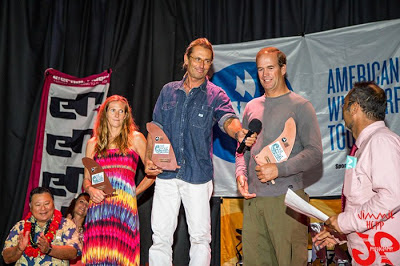 In conclusion, contests are still a big question mark for me. I don't like the idea of competing against others to show the judges that I'm better than them, but when I'm in a heat, I actually enjoying doing that quite a lot.
Just another of my many contraddictions...

The second thought I have is for the webcast.
Finally windsurfing contests are catching up with the surfer cousins. It's not perfect yet. Commentators don't have a monitor so they often talk about some action happening somewhere, while the cameraman is shooting something else, there's no replays, no real time scores, no beach interviews, etc.. BUT there is a live webcast! And that is huge!
BTW, Kai Katchadourian was so good at commentating the final day, it seemed like he's been doing that for all his life! I really hope he's gonna be commentating for all the other contests where he's going to attend.

Third and final consideration.
The Pros put up an amazing show, thanks to the great conditions.
Sailing in a heat and free sailing are two different things. Levi didn't win, but he's still the best at Hookipa, IMO. See? Contest results don't really mean much (other than some money for those guys, now that I think about it...).

16yo Bernd Roediger won and that is amazing.
10 years ago I was a windsurf instructor at Kanaha and I remember his dad already taking him to the beach every single day. That's how you become that good that young, I guess.
Congratulations to him, but I confess I was rooting for Kevin Pritchard in the final.
Bernd is so good and young, he will win a hell lot more contests.
Kevin's carrer has peaked already, it would have been really nice to see him win again.

But the main reason why I was rooting for Kevin was the only mistake that his brother Matt (head judge) did, in my opinion: he didn't finish the Pro's double elimination on a day with really good wind and waves.
He left a few heats for the final day when the waves were smaller and the wind was super light.
That was a clear advantage for the lighter weight of Bernd and everytime there's something that doesn't seem fair to me, I automatically support the weaker side...
Nonetheless Kevin sailed amazing and nonetheless Bernd sailed even more amazing. It was a great show. I would have just liked to see it end the day before.

BTW, I'm writing an article for Windnews and I asked Kevin his opinion about that and he replied in a very classy way:
GP. Did you ask Matt why he didn't finish the Pro's the day before?
KP. I am sure he did his best to finish with the best conditions. The Maui Makani is not only about the pro's, it has amateurs, masters, women, youth, so I am pretty sure he did his best. I mean it's not his fault that I am so big compared to Bernd...
GP. Any comment on Bernd's performance and in general on the kids level? When I came to Maui 12 years ago, I don't remember so many under 18 kids ripping so hard!!! What changed?
KP. Yeah he is ripping for sure. It is good to se someone getting consistent, ripping all the time. Once he gets even stronger, you can imagine how he will be with some power in his bag of tricks. Should be impressive!

Allright, let's move on to the photos.
I was competing in two categories and so I was quite busy and didn't take too many.
Here's some random ones.

Lots of people on the hill for the first (huge) day. (photo by Nino) 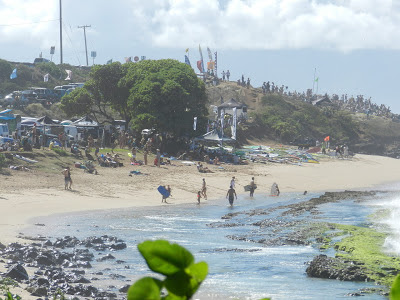 I had to patiently wait for a gust for this shot. 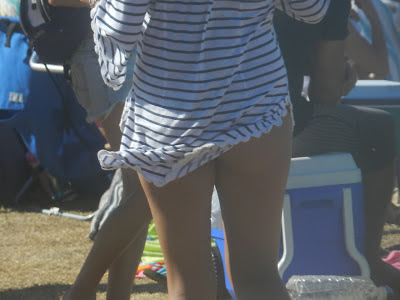 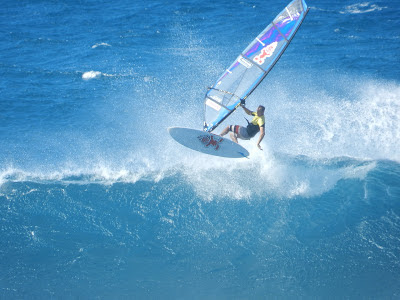 Next two is me in the semifinal of the Masters. Those waves were just awesome. 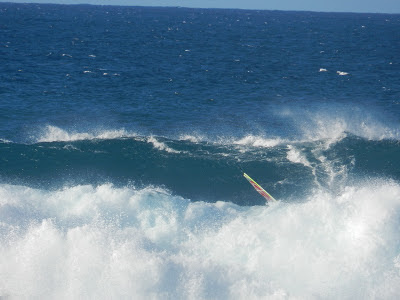 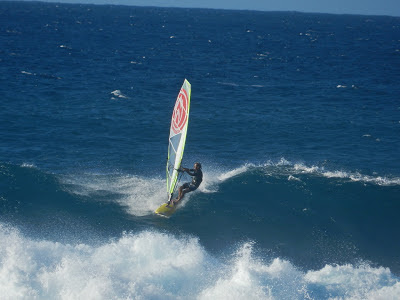 Someone brought a couch on the beach and Swifty and Rosario took advantage of it. 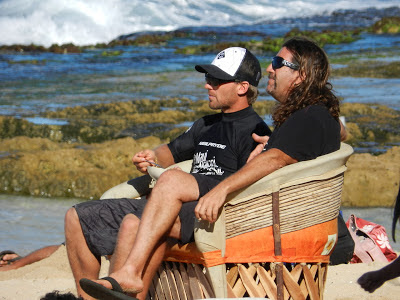 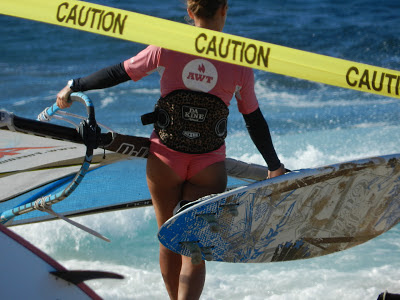 Oh, these shots instead have nothing to do with the contest: they are from Nov 7th. Sorry, got to clean up that memory card!
Ferdi is an aerial machine. 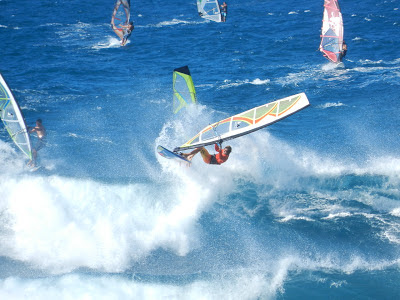 This push loop by Jason Prior was totally sick. I caught it just in time without a chance to zoom out. 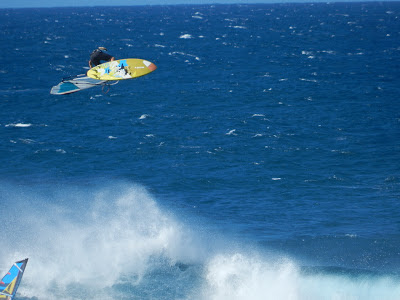 Not sure who this is. 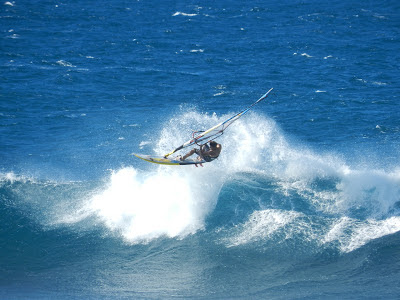 That's how Maui Surf Report (only) team rider Nico Dramisino sailed back to the beach after having broken his mast. 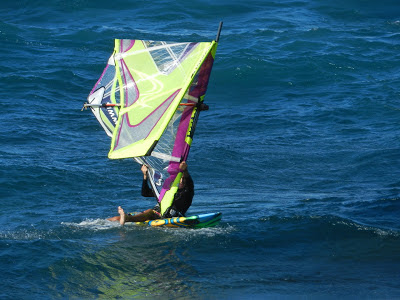 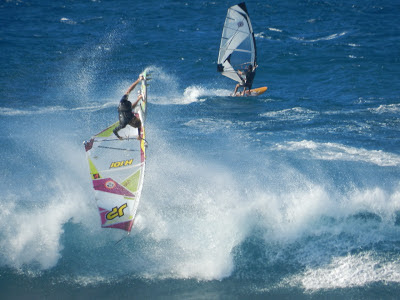 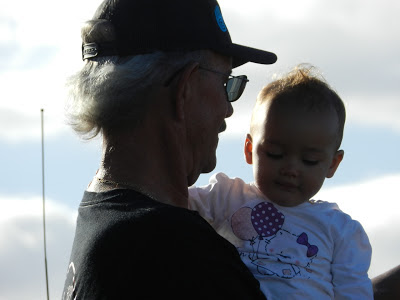 That's all folks, thanks for reading.
Oh wait! I left a blue Mana Foods bag full of K4 yellow plastic fins on the beach at Hookipa on Nov. 9th. If you took it (or know who took it), please email me (email address to the right of this blog).
I was doing tons of experiments with them and was very close to a magic setup that would allow me to consistently do turns like the one at the top of this post (thanks Jimmie Hepp. Photo from this gallery).
Those fins mean a lot to me. They look like the ones in the photo below. Thanks. 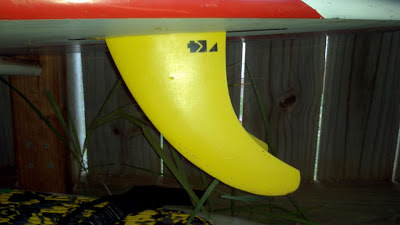