Thanks to blog reader Vern for the donation.

Here's a comparison between two wings I've used quite a bit. Everything I say is based on personal opinions and preferences (even though they're so strong that they sound like objective facts).

1ft 14s is exactly what Pat Caldwell had in his table for today, it's really not much (specially in Maui), but once in a while there's a decent wave. Low tide must be killing it, since there were five guys out earlier and they all left. Check the Lahaina webcam if interested, for size, conditions and consistency.

Windswell came up a bit, small waves at Hookipa, bigger on eastern exposures.

Second day in a row of completely flat on all Maui shores, here's a reminder of how waves look like... in Tahiti at least. Photo by Ben Thouard. 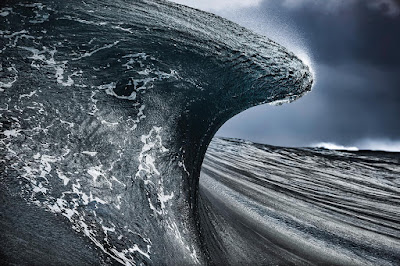 Jason Hall and buddies did a downwind run launching at the upper end of Hookipa.

Despite the sliver of 16s energy, we can call it flat also today. Check the Lahaina webcam if interested, for size, conditions and consistency. Oh look, here's a wave!

Tiny waves at Hookipa and on eastern exposures.

Gonna take a break from filming downwinders (got too many clips to edit), but here's a couple of shots taken yesterday by Art Wible. Couldn't go with the usual group yesterday, because I had to work in the afternoon, so I went solo thanks to the Maui Bus! I think this is Dylan Primrose. 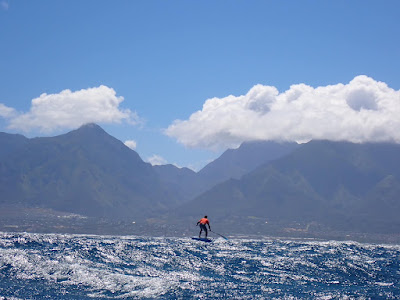 This is Jason Hall instead. He, like many others of the "original foilers" (the ones that started foiling way before the wings appeared), didn't have any wind sport experience when he started winging. Look what he's doing now! Which prompts the following question: which is the most desirable skill to have in order to learn winging? Here's what I think:
1) foiling of any kind (surf/SUP would be the best)
2) windsurfing
3) kitesurfing 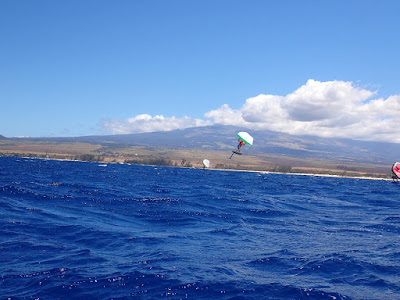 Flatness continues also today, which tell us that that fetch close to the artic sheet of a week ago was not oriented towards us. There should be a small SW bump starting Monday thanks to a Tasman Sea fetch that Pat Caldwell described like this:
A short-lived, compact gale in the Tasman Sea 8/23-24 is expected to take over as the dominant background surf by Monday 8/31. Heights should continue below average from 208-220 degrees 9/1.
The Tasman Sea low pressure of 8/23-24 moved east of New Zealand 8/25-26. ASCAT satellite showed a compact area of gales and a broad area of near gales. This should trend local surf up 9/3 from 180-200 degrees not much beyond background.

Below is the collage of the maps of August 23 through 26 which will help follow the above description. I put a red arrow on the fetch of the 24th, which was the strongest. Overall, not a particularly impressive low, so don't build any expectations... you know how little we get out of Tasman Sea swells. 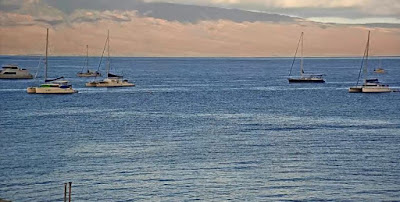 Another downwinder yesterday, in this short clip I was trying to chase Kathy Shipman.


This is the comment I posted on the photo that Art took (his spot was by the back door) showing yesterday's solution to the puzzle of fitting four foil boards and 5 humans in his Toyota van:

"Since I can only join in three days a week, for the first time in my life I'm considering early retirement... so I can go with you guys every day! :)
At the same time, "scarcity" makes it precious, so I'm super stoked every time I get to sit into the magic van that takes us to our magic carpet ride... " 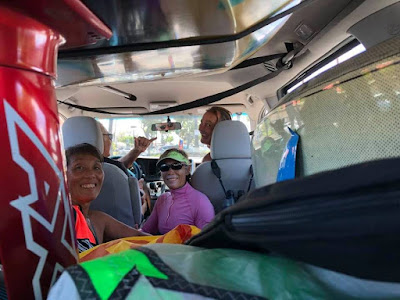 "I don't see any possible improvement in your body position in this shot. Every singly joint is flexed just the right amount to achieve that perfect harmonious balance of all the forces involved.
I hope it felt like that." 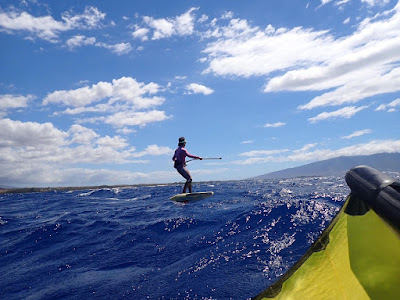 Don't get excited about the 14s SSE reading at Lanai (might be a glitch), I don't see anything at all on the Lahaina webcam.

There were some waves at Hookipa yesterday with 3ft 8s from the NE during the day. Today that energy is down to 2ft, but there should still be small waves at Hookipa, bigger on eastern exposures.

I did a lot of stuff yesterday and I'm editing the related Kai Penny video. Meanwhile, please enjoy another minute of downwind bliss.

A foot 15s is a lot better than the nothingness (2ft 10s from SE makes for nothing in Maui) that Pat Caldwell posted in his table. I believe the source of it is the fetch in the collage of the maps of August 21 and 22 below. The yellow section was actually pretty strong, unfortunately we can't be sure it was aimed at us, as there's no great circle rays map down there. We'll find out tomorrow. 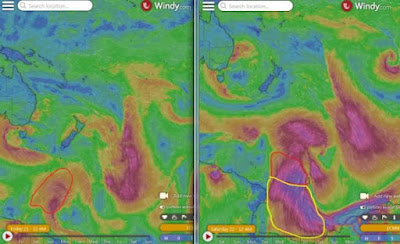 Whatever the source was, and whatever the buoys say, the only thing that counts is what's really in the water. So check the Lahaina webcam if interested, for size, conditions and consistency. Mostly flat, with a beautiful wave or two once in a while.

The 2ft 9s from 37 are that "extremely minor" N/NE bump I mentioned yesterday. I did hear some wave noise upon waking up (so possible occasional chest high sets), but I'll stick to the usual generic call for small waves at Hookipa, bigger on eastern exposures.

First downwind run on a demo Gofoil NL130 was awesome. It worked well on waves (even though I can get tighter turns on my GL120), but it really shines while winging as it handles the high speed with superior stability compared to the other Gofoil lines. I'll probably get one for winging (Hi-Tech has a bunch on order) and keep the GL120 for surfing. And the pieces of the puzzle keep changing.

Southerly energy down compared to the past few days, but it should be enough for some breakers. Not sure about the source of the small 18s at Barbers. Check the Lahaina webcam if interested, for size, conditions and consistency.

Extremely minor N/NE bump could possible show up today and tomorrow on the north shore (but no signs at Pauwela yet). Here's how Pat Caldwell described the evolution of the fetch: A broad area of weak low pressure formed north of Hawaii Saturday 8/22 near 45N and moved SE as it weakened into Monday 8/24. Fresh to strong breezes aimed at Hawaii beyond 1200 nm out could bring in a tiny, short-period event locally building 8/26-27 from 000-020 degrees.

Below is the collage of the maps August 22 through 26 that will help follow. As you can see, there's really not much to be excited about.

Got up super early this morning, so I did a Windy run and found a few interesting fetches in the north Pacific. Below is the collage of August 29, Sept 1 and 4. Possible NW, NE and NNW bumps few days after the fetches eventually happen. The last one should be the most significant, but it's also the most remote (from the time point of view), so the least reliable. Time will tell.

Another intense day of testing gear, I'm learning a lot.
This is a Facebook memory: in 2016 I planned a 3 days stop over in Melbourne on my way from Indonesia back to Maui, in order to visit a friend who lives in Torquay and to surf Bells Beach. That was a bad idea. I mean, the stopover was lovely, but surfing in 11C/52F water after Indo was a terrible mistake. Despite the massive amount of neoprene I had on me, I couldn't last more than 45 minutes and I got out of the water saying to myself: this is it, I'm done with cold water for good! I put a mental check mark next to Winky Pop in the list of spots I'd like to surf before I die, and deleted J-Bay at the same time. 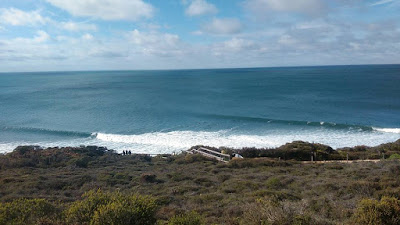 Kai Lenny came out with this new episode of his 20@20 series.

Southerly energy still hanging in there, check the Lahaina webcam if interested, for size, conditions and consistency. It's actually kind of pumping over there. 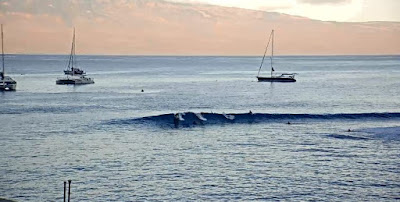 That sliver of 11s energy might come from the hurricane Genevieve, but it's so small it won't do much at all, so small waves at Hookipa, bigger on eastern exposures.

Sorry about the lack of photos of yesterdays, these days I have a SUP foiling board and a foil to test and I'm too busy doing that. Fortunately the contributing photographers always have something to offer. This is Robby Naish's favorite way of entering the harbor: with a few tons of water behind. Big north swell a few years ago. Photo by Darrel Wong. 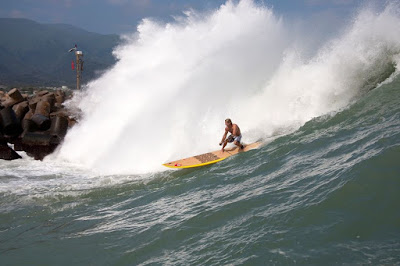 Southerly energy on the decline, but the numbers at the buoys are still decent. Check the Lahaina webcam if interested, for size, conditions and consistency. It looks very slow, but there's still some gems.

Jeffrey Spencer posted this IG clip in which he makes the first documented wing foil back flip.

This instead is a crazy kitesurfing video by Kevin Langeree. Check the first 10 seconds and if you like what you see, skip to 2:45 for more similar action. Incredible stuff.

Fun size numbers at the buoys, check the Lahaina webcam if interested, for size, conditions and consistency. 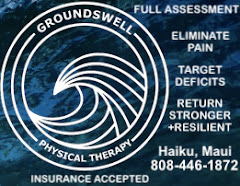