Last post for a while, as I'm finally having trigger finger surgery this morning. The morning calls will be back as soon as I can type again. No idea when that'll be.

This is an incredible shot of which I have no information at all. I'm gonna guess Shipstern Bluff in Tasmania (in a particularly clean day). 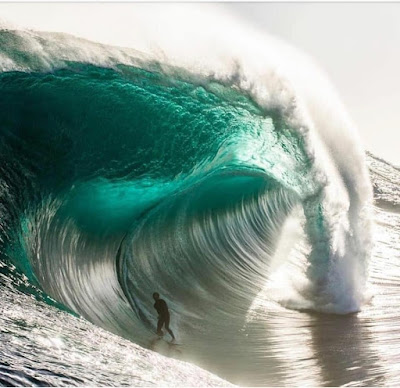 Angular spreading southerly energy is still at the buoys, but it shouldn't last for long. Check the Lahaina webcam if interested, for size, conditions and consistency.

The modest NW swell filled in, but only Hookipa will have small waves out of it. Next swell should be a little bigger, Pat Caldwell calls for 3ft 14s on Saturday.

Wind map at noon (the other ones can be found at link n.-2 of GP's meteo websites list in the right column).
N/A this morning.

OneMoreFoto is on a roll and just posted this remarkable shot of Kai Lenny. 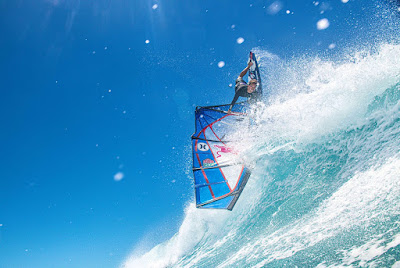 Alan Cadiz instead just posted part 2 of the best wing foil instructional video you can find out there: how to get in the water, then on the board, then on your feet and then going. Part 1 (the very basics) is here and it has the plus of having his lovely daughter Cloe in it. In this other more advanced one, he shows tight radius turns and you can see how having a boom is a massive advantage when it's time to switch your hands on the boom: you don't have to look at the handle to grab and you can instead focus your eyes on the foiling. That made my jibes a lot better two days ago when I tried a Duotone Echo myself. I haven't tried one in the waves or for downwinder yet, but for flat water freestyle, for me the boom is a Winner!

The "original" and long lasting swell is now down to 13s, but the new long period energy from the angular spreading fetches (which imply inconsistency) I highlighted in yesterday's collage is now here and so there will still be waves for a couple of more days. Check the Lahaina webcam if interested, for size, conditions and consistency.

New WNW energy is at the outer buoys, but it's quite modest and from around 300 degrees, so only Hookipa will have some waves later in the day. Still summer conditions in the morning.

Thanks to blog reader Renew Your Spirit for the donation.

The waves on the north shore were small yesterday (but still plenty on the other side), this is an album of the Hookipa action posted by Jimmie Hepp. I chose instead this shot of kiter Jesse Richman by OneMoreFoto (not sure when this was). Still decent numbers at the buoys, this swell has been very long lasting. Below is the collage of the maps of May 12, 13 and 14 that show the source.

NW swell disappeared completely and today it should look pretty summery on the north shore.

Yesterday was a classic Maui day in which you could pretty much do anything you wanted in any kind of conditions. I personally started it by nose riding perfect knee to waist high waves in waters of Fijian quality. By mid day the wave foiling conditions looked like in this photo below. 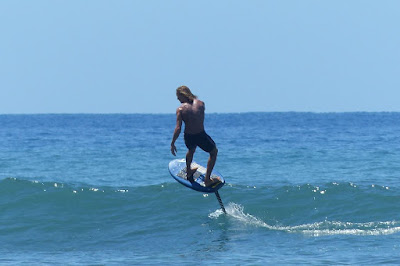 Pretty much at the same time, here's how Hookipa looked like in this photo out of Jimmie Hepp's windsurfing album of the day: windy and wavy with a lot of talent in the water. 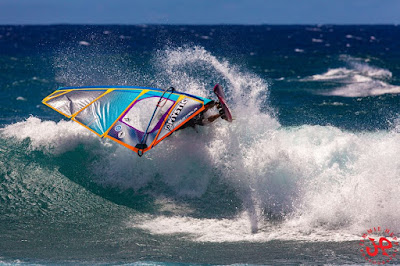 Jimmie also posted a kitesurfing album out of which I picked Kai Lenny in a Tom Curren-like bottom turn. 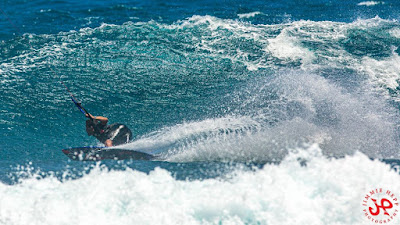 Late in the afternoon, despite the tiredness, I also threw in a wing foiling sesh thanks to a Duotone wing that Alan Cadiz let me borrow. Best wing foiling session so far for me (out of a dozen), so good that I will talk about it more in the next few days, as it's a bit late this morning and I'd like to get going.

Good readings again at the buoys. Although there's some sets also here, just like yesterday the difference in size between Lahaina and Ala Moana is substantial (pretty much twice as big). Seeing the straight south direction at the buoys, I'm going to officially blame Kahoolawe for that. Nonetheless, check the Lahaina webcam if interested, for size, conditions and consistency, as there's still fun to be had on that side.

NW swell still lingering around with 3.6ft 11s but, judging by the upstream buoys, on a definite decline (will probably be completely gone tomorrow). Hookipa should still have head high sets (with occasional bigger sets) to start with.

The waves were big waves on the north shore, this is my pick of Jimmie Hepp's gallery of the day at Hookipa. 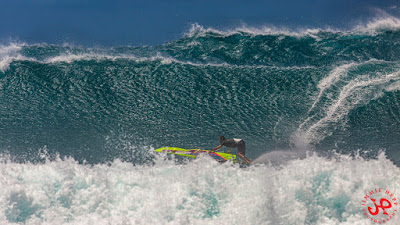 I took this one at sunset in challenging light conditions, but even more challenging surfing conditions. It looked very rough out there. 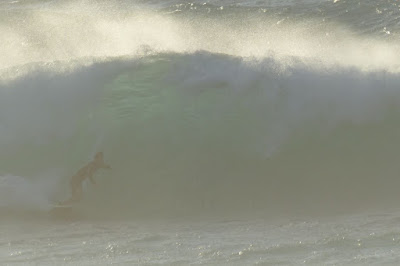 Nice numbers at the buoys, Barbers even feels almost 2ft 18s of the second pulse of this south swell. Check the Lahaina webcam if interested, for size, conditions and consistency. Somehow, it looks pretty small right now, Ala Moana instead is occasionally pumping (below). Hard to figure out why, I guess we can always blame Kahoolawe, the low tide or some astral conjunction.

Once in a while, there's a good set also in Lahaina. It might improve with a little more water on the reef.

As predicted, the NW swell peaked mid day yesterday and now it's on the decline. Below are the graphs of NW and Pauwela that clearly show that together with the Surfline forecast, the usual 12h late. Still pretty big at Hookipa, seek for a sheltered place if you're not a pro.

The best of my three sessions yesterday was SUP foiling. Fastest cutbacks I've ever done, really exhilarating. Didn't take too many shots though, this is just a sample of the wonderful mid day conditions on the south shore. 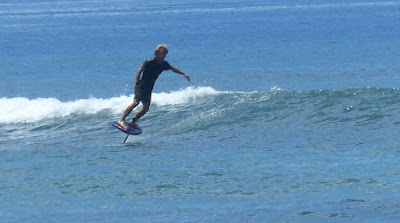 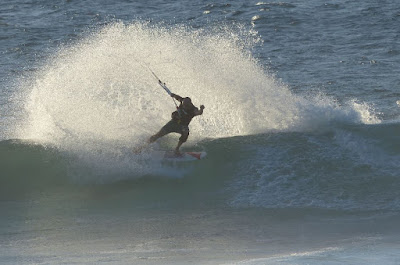 Directions (and possibly sizes) at the buoys are influenced by the large NW swell, more than ever check the Lahaina webcam if interested, for size, conditions and consistency. There's plenty size, as you can see.

NW swell followed the predicted timing (once they hit the NW buoys, it's pretty easy to predict that). Below are the graphs of NW and Pauwela together with the Surfline forecast, which, as usual, seems to be 12 hours late. The swell should peak around noon around 8ft 14s. Hookipa is probably double overhead, doable by the good guys. Common mortals, seek for sheltered places. Good wind conditions, but only for the first hours of the morning.

6.30am hookipa has inconsistent 11s sets up to head high and clean conditions.
5
Posted by cammar at Friday, May 15, 2020 No comments:

Hookipa was a 9 in the early morning (sorry, no beach report, but I didn't drive there, I paddled there and I'm not a fan of carrying a cell phone in the water). Perfectly peeling 12-13s glassy head high plus waves. This is Annie Reickert, photo by Erik Aeder. 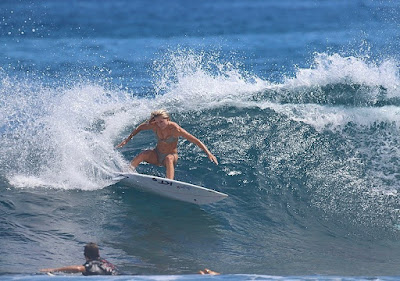 This is a list of Beach Parks that will re-open tomorrow (with a few more starting with W that didn't make the page). Kanaha is not there. 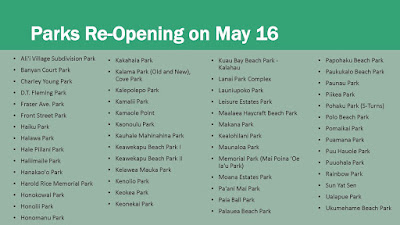 Good numbers at the buoys and good waves in the water. Check the Lahaina webcam if interested, for size, conditions and consistency. 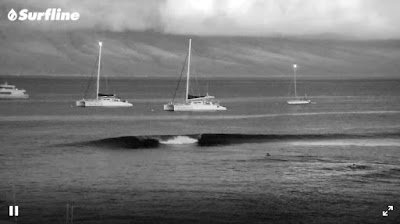 New long period NW swell on the rise all day, here's Pat Caldwell's description of the evolution of the fetch (posted on Wednesday):
A new low pressure cell formed east of the Kuril Islands 5/11 and tracked east along 45N. A captured fetch was set up over the 320-330 degree band with the head of the fetch reaching the Date Line 5/12. Seas grew near 25 feet as validated 5/12 overnight by the JASON altimeter. The center of the low took a turn to the ESE 5/13, lengthening the captured fetch. Models show a slow weakening of winds as the head of the fetch reaches the closest position to Hawaii within 700 nm on Thursday. The system is modelled to shift NE and weaken east of the Hawaii swell window late 5/14 into 5/15.

The long captured fetch and proximity of the closest gales ensures winter-caliber surf for Hawaii. The event should rapidly climb on Friday with heights above the May average by mid-morning from 320-330 degrees. Heights should reach well above average Friday PM, peak in the wee hours Saturday, then remain elevated with a slow downward trend into Sunday from 320-340 degrees. It should fall to near the May average by Monday 5/18 and fade out by Tuesday.


Below are the maps of May 11 through 14 which will help follow.

17s swells take 15h from the NW buoy to us, so the equivalent of those 2ft will be here at 7pm. Also, 18s take 7 hours from Hanalei to here, so the equivalent of that 1ft will be here at 11am (all these travel times are in the post Buoys to Maui travel times and Maui's shadow lines). So we can expect nothing at all in the early morning and slow gradual rise all afternoon with possibly sizey sets at sunset, but the real big stuff will only happen tomorrow. Meanhwile, 2.7ft 11s at Pauwela will make for smaller than yesterday, but still not flat and very clean Hookipa again.