For a change, I surfed Kihei side yesterday and then I went to Dumps and took some photos. Some sets were solid. 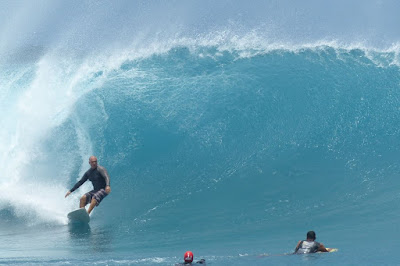 Enjoy that vision, it's not gonna last long. 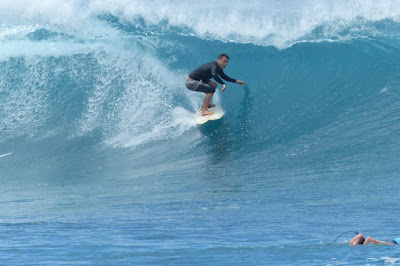 I had the pleasure to witness the true excitement of Jackson Bunch when he arrived on the beach and saw the pumping waves. The kid was glowing. Still a grom at heart, but already one of Maui's best surfers. 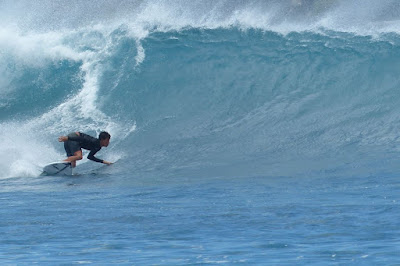 This bottom to top turn combo was sweet. 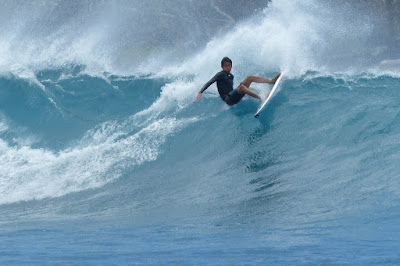 Here he pulls in into a closeout barrel, but he came out on other ones. 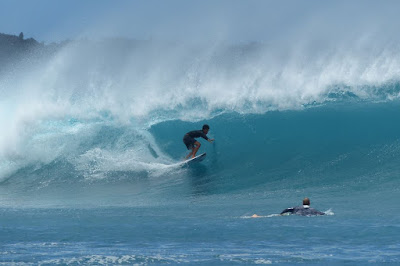 South swell on its way down, but with around 3ft 15s at the buoys, there should still be plenty waves on offer today. Check the Lahaina webcam if interested, for size, conditions and consistency. 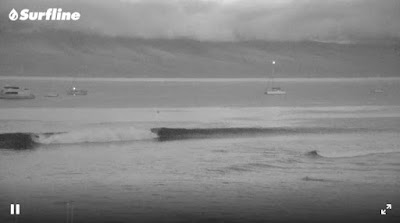 Gorgeous day of surfing on the south shore yesterday, here's some photos I took after my session and before going to work. They're labeled with the degree of difficulty of "spot guessing". 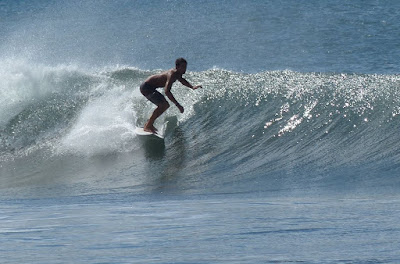 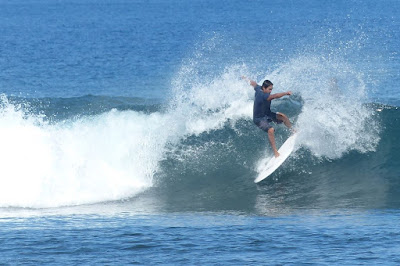 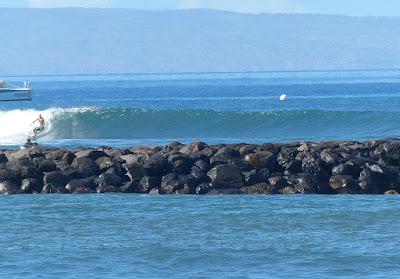 Virtually impossible to guess where I surfed instead, seen the lack of reference points, but you can tell it's not Launiupoko. Notice once again how much the board flexes: in the first shot, I have very little pressure on the deck (the steep drop felt pretty weightless in fact, and you can see my toes off the deck) and you can see the logo. In the second one, I made it to the bottom and I'm applying pressure with my feet (toes pressing on the deck) and the logo disappeared.

That might be part of the reason why my 6.8 Bushman sets the rail so beautifully in the bottom turn and then springs out of it like if on a train track. Very happy about my choice of using a step-up for this place. The drops were intense. So intense that I only caught three big waves and that was enough. I did get caught on inside after impatiently going for a small one tough, and duck diving in extremely shallow water wasn't fun. I couldn't push the board down too much, the white water would always roll me around and even though I was holding my board the whole time, I always felt the reef dangerously close. All good, but next time I'm gonna use a 2mm long sleeve top there, just in case.

This is how Maalaea looked on the webcam later on. 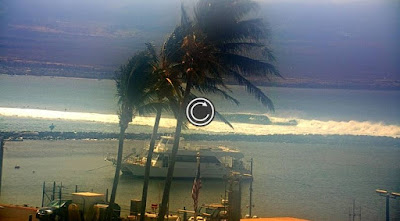 The second long period swell that Pat Caldwell announced never really was that separate from the first one. What counts is that the swell is still pumping at 3.4ft 17s, and it's going to be another fantastic day on the south shore. Check the Lahaina webcam if interested, for size, conditions and consistency. 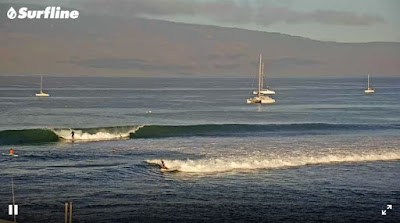 The windswell is coming from a NE direction today and that should give Hookipa and the eastern exposures some small waves.

South swell was beautiful, but I don't have any photos, so here's Hookipa in this photo out of Jimmie Hepp's album of the windsurfing action of the day. Still some occasional head high ones on the second day of this out of season NW swell. 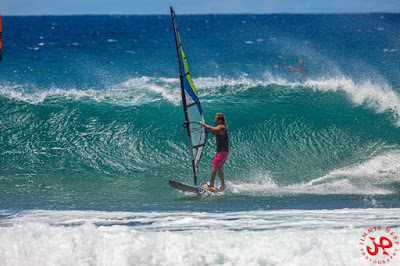 Gofoil posted an excellent video of a Maliko downwinder. Most of participants with the wing (Greg Drexler's Cloud wings look really good and I love his style too), and Dave Kalama with the paddle only.
Yesterday was my first wing session after my surgery and it went well, so I'm back on that game. Haven't bought one yet, at the moment I think I'll get either Jeff Henderson's Hot Wing (which I tried) or Greg's (which I haven't tried yet, but will).

In the meantime, I've done a few more SUP foiling downwinders. I'm now at attempt n.22 and the thing is still pretty damn hard. If it wasn't for Dave telling me it was the hardest thing he's ever learned, I might feel pretty discouraged by now. Instead I keep loving the challenges of the discipline, and having Kai Lenny fly by me while I was struggling to get up on the foil provided me with another motivational super charge.

That was the first time I went all the way to the harbor (from Kuau): it took my 2.5h of elapsed time, half of which spent sitting on the board and recovering from the few 1-2 minutes glides I had. Because of my poor open ocean bump reading technique, when I do take off, I still have to pump and paddle too often and I always come down physically exhausted (heart rate in the 130s, while my resting rate is 45!). The other half of the time was spent while standing in surfer stance, feet in the footstraps, paddle on the front side, patiently waiting for a slightly steeper mini drop appearing in front of me (sometimes that wait can be a long one!). I still miss half of the opportunities I deem worth paddling for, which is a lot better than 99% of them, like it used to be.
Might be time for a an update video.

First pulse of this swell shows lovely 17s readings, it's going to be another beautiful day of surfing with good wind conditions for the whole Lahaina side in the morning. Check the Lahaina webcam if interested, for size, conditions and consistency. Here's a 5.22am head high drainer. 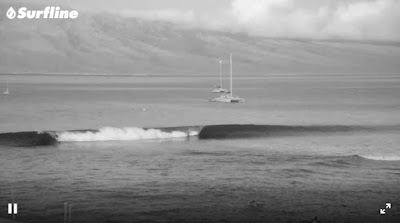 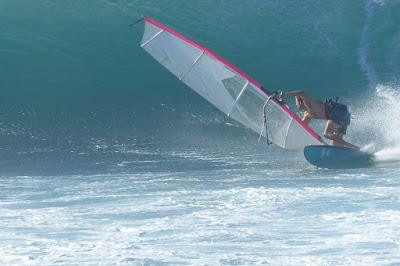 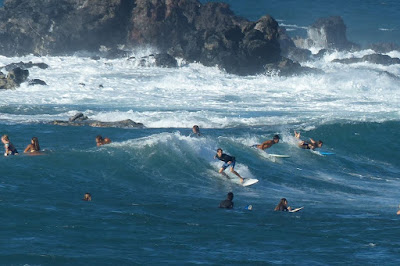 3am significant buoy readings and discussion. 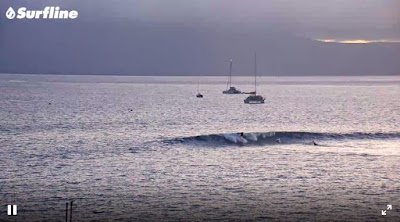 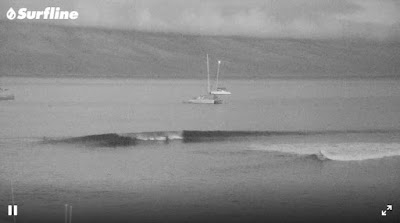 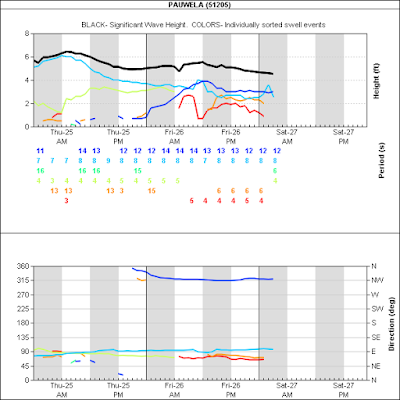 6.30am hookipa has occasional chest high lumpy sets.
7 considering the season, 1.5 in general.
Posted by cammar at Friday, June 26, 2020 No comments: 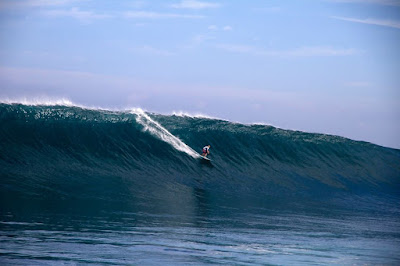 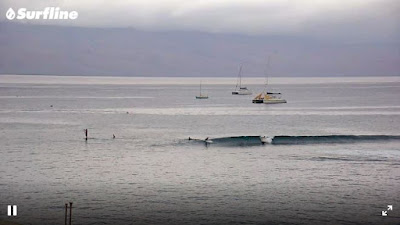 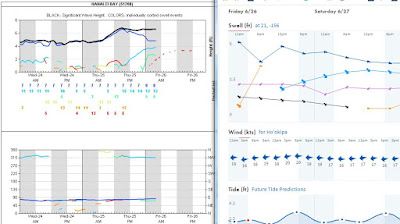 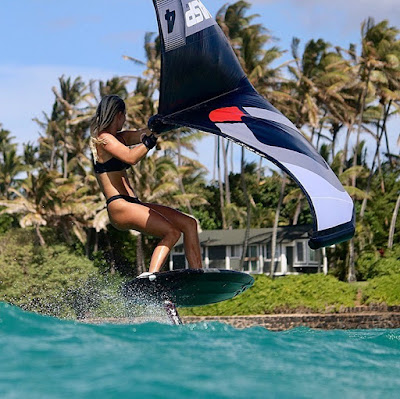 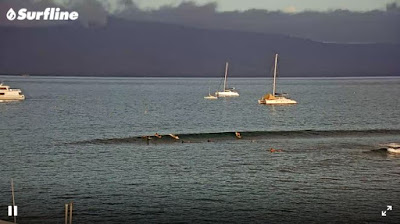