Hookipa has head and a half glassy waves.
8
Posted by cammar at Wednesday, September 30, 2020 No comments:

Extremely high quality waves all morning yesterday in Lahaina. Don't have shots of the day, so here's my review of a 12.5" flat tail from Gofoil.

This swell has performed much better that I expected (size and intensity of the fetch helped the angular spreading) and the numbers at the buoys are still nice. Check the Lahaina webcam if interested, for size, conditions and consistency. Here's a flawless shoulder high one at 6.30am. 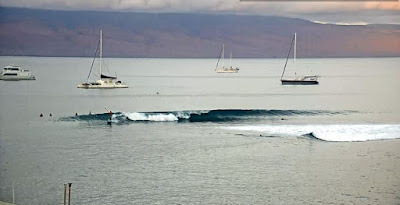 First low pulse of NW energy is at Pauwela, while the second much larger one is on its hills (at NW001). Let's see how Pat Caldwell described the evolution of the fetches:

Below is the collage of the maps of Sept 26 through 29 that will help follow.

Below are the NW001 and Pauwela graphs, together with the Surfline forecast. The second pulse seems to have start hitting the NW buoy around 5pm yesterday. 11s means 21h of travel, so I drew a red dotted line on Pauwela's graph to indicate a local rise in the afternoon. Earlier than the Surfline forecast that calls it during the night. Surfline forecsts have been late, so that might be the case also this time. Keep an eye on the Pauwela buoy, if you plan to surf in the afternoon. Meanwhile, almost 3ft 11s should make for at least head high waves at Hookipa to start the day with (beach report later this morning).
No to light wind in the early morning should make for very good conditions.

PS. I just saw a few well overhead sets at Sunset Beach in Oahu, so here in Maui there might be an even earlier rise around 11am/noon. 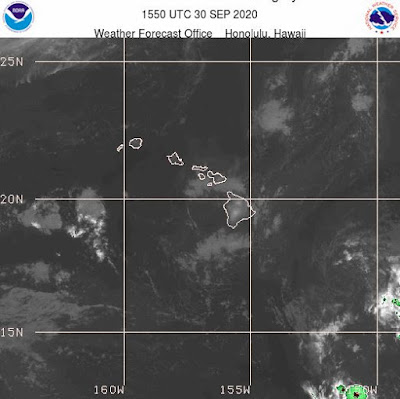 Posted by cammar at Wednesday, September 30, 2020 No comments:

This is the reply I got from the Mayor's office to my email:
Aloha,
Under current Public Health Emergency Rules, County of Maui park hours are from 7 a.m. to 7 p.m.

Thank you,
Brian Perry
Director of Communications
Office of the Mayor

Which means that until there's an insurrection, they're not gonna change it. So please keep sending emails to the Mayor's office: Mayors.Office@co.maui.hi.us to ask to open the beach parks before 7am as it used to be before Covid.

Fun surfing on the Makena side yesterday. 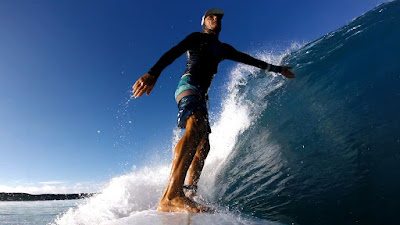 Waves were a bit racey.

Period down to 15s, but still 3ft at Lanai, should be another good day of surfing on the south shore. At least to start with, because, as Pat Caldwell reminds us, since this is an angular spreading event, past experience has shown that once the dominant wave period falls within 10-14 second, the energy drops sharply, because the longer-period swell maintains size much better during the travel, with the shorter-period swell having substantially more decay.

The windswell at Pauwela will give small waves to Hookipa and the eastern exposures. The NW001 buoy started recording 13s NNW energy around midnight. At 13s it takes 19h to get here, so I don't think there's going to be anything from that locally all day. Tomorrow there will be. 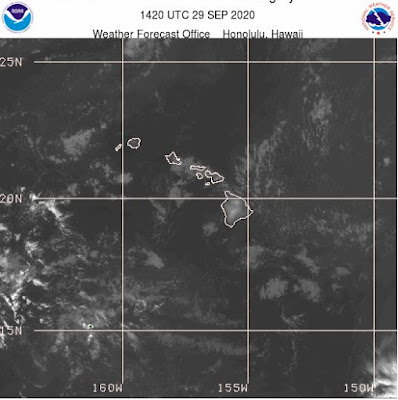 Posted by cammar at Tuesday, September 29, 2020 No comments:

Wonderful waves on the south shore, here's a beauty of a right. The sky is not too shabby either. 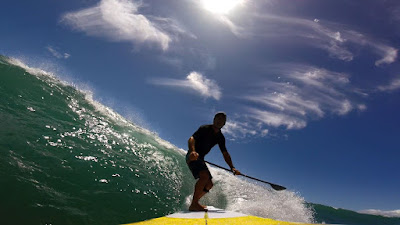 
4am significant buoy readings and discussion.

Impressive numbers at the buoys. Second time in a few days in which an angular spreading exceeds my expectations. Check the Lahaina webcam if interested, for size, conditions and consistency. 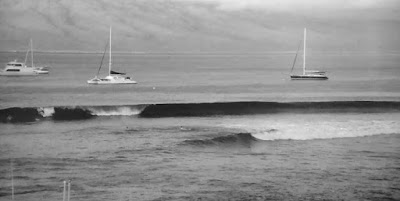 Back to windswell only, small waves at Hookipa and on the eastern exposures. 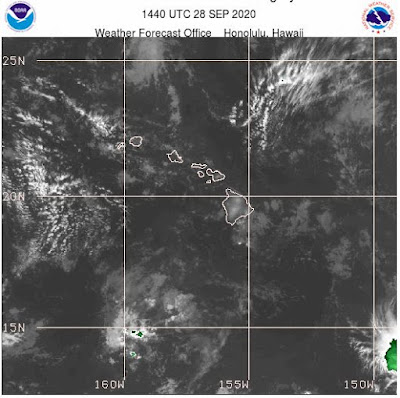 Please send an email to the Mayor's office: Mayors.Office@co.maui.hi.us to ask to open the beach parks before 7am as it used to be before Covid. 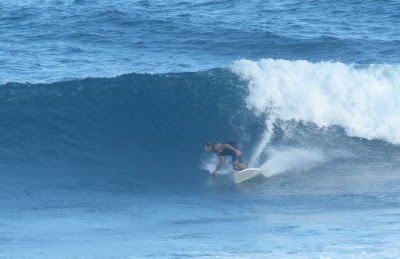 Extremely good numbers at the buoys with two distinct swells, the new very long period energy comes from this fetch that Pat Caldwell described like this:

Below is the collage of the maps of Sept 19, 20 and 21. I put an arrow on the fetch, which is so aiming at South America that I originally didn't even circle it in blue. The angular spreading of such a fetch will be extremely inconsistent, so it's a good thing to have a solid background of 2.5ft 15s, as I guess the 20s sets will be many minutes apart.

Check the Lahaina webcam if interested, for size, conditions and consistency. Conditions should be good all morning.

Swell is almost gone and it's going to keep declining all day. Hookipa will still have some small waves.

This is the email yesterday I sent to the address of the Mayor: Mayors.Office@co.maui.hi.us

Subject: please start opening again the beach parks before 7am as it used to be.

Hi Mayor,
I'm a strong supporter of everything you've done so far to contain the spread of the virus. At the same time, I don't see any reason not to start opening the beach parks before 7am again.
The early morning surfers at Hookipa are forced to cross the Hana Highway sometimes in the dark and with winter swells approaching, that is going to get more and more dangerous. It's only a matter of time before an accident will happen.
Also the surfers at Kanaha are complaining because of the inaccessibility of the park in the early hours.
Thank you very much.

Please send a similar one if you think that the parks should start opening earlier than 7am again. The more emails the better, so I will now start my posts with a reminder like this until that happens. 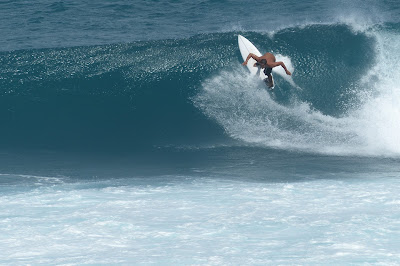 That resulted in a wide spray fan. 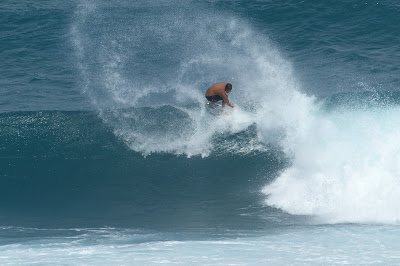 Later on the windsurfers went out and this is my pick of the Fish Bowl Diaries album. 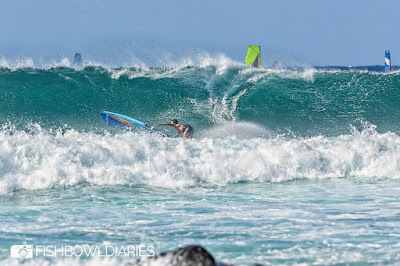 At that time I was instead shooting my favorite wave wingfoiler Dylan Fish. 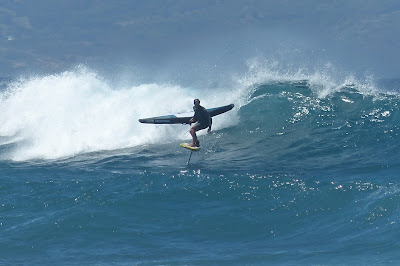 Couple of pulses are expected to arrive during the weekend and the 17s reading at Lanai could be the first one, even though the direction is not what expected. Here's how Pat Caldwell described the evolution of the fetch:

We'll check the second one tomorrow, below is the collage of the maps of September 17, 18 and 19.

NNW swell still decent at the buoys, today it's predicted to be on the decline all day. There should still be at least head high waves at Hookipa to start with.

Despite my skepticism, the NW swell did get pretty big and the Maui rippers put up a show in all the wave disciplines. The action was insane, here's a sample of it, thanks to the contributing photographers who I thank very much for letting me use their photos. My favorite shot is this one of Luke Siver by Fish Bowl Diaries, out of this album. 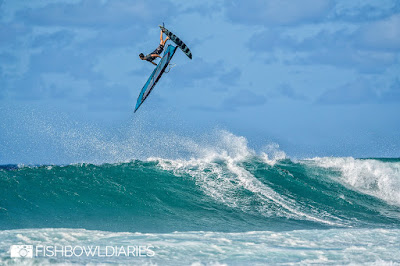 This is a little chapter dedicated to Maui's own Kai Lenny who was seen launching his jet ski early at the harbor before going to Hookipa were he did... everything! This is a sick kitesurfing bottom turn from this album by Jimmie Hepp. 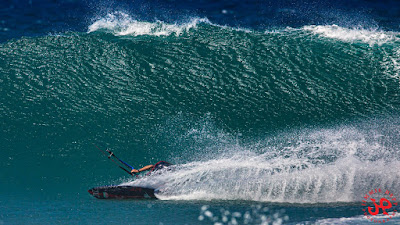 Then a bit of windsurfing... 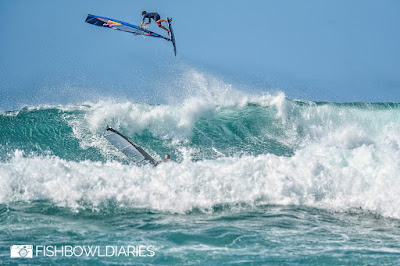 ...and at sunset he was wingsurfing. Here he's trying a new move: mid backflip on the face of the wave, he ditches his board, jumps on the wing and ride it as a magic carpet. Just kidding, but sometimes that's how new moves are born. 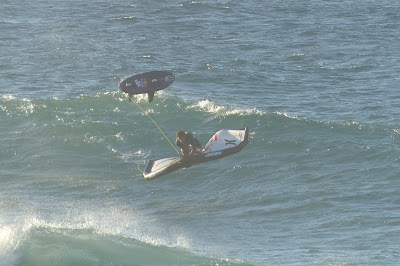 These are the rest of the shots I took. Logan Bediamol. 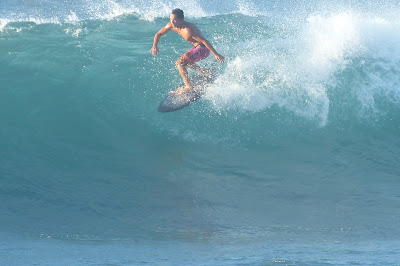 Last wave in for Kai. 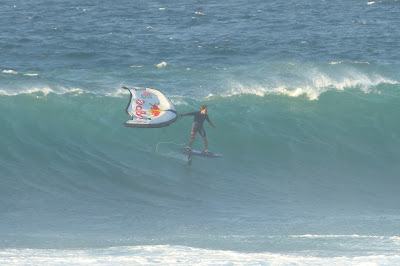 Cody Young and his buddies formed a tight pack at The Point and they were all totally ripping. 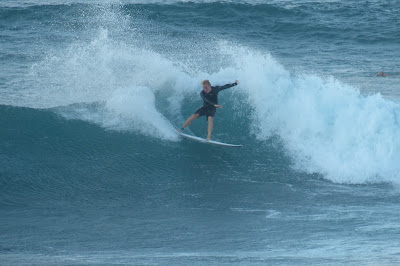 After windsurfing, Bernd Roediger rode a small SUP and shredded some more. He's only kicking out in this photo. 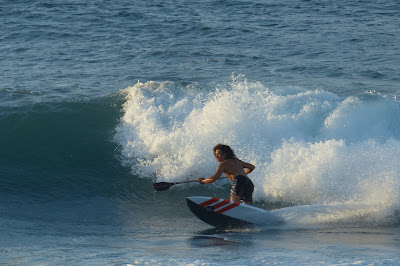 Pat Caldwell had 3ft 18s for today, but that is not what we have at the buoys. Keep an eye on them (and on the webcam) as they could come up during the day. Multiple sources will generate multiple swells over the weekend. Check the Lahaina webcam if interested, for size, conditions and consistency. It looks bigger than what the buoys say. 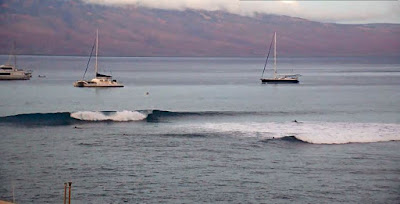