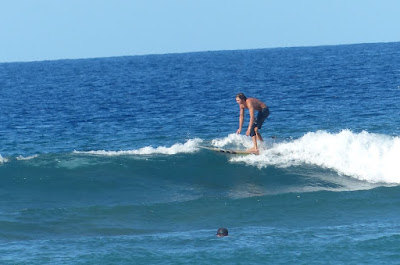 Second swell is pumping at the buoys with 17-18s readings, while the first should still provide plenty energy in the 14s range. Check the Lahaina webcam if interested, for size, conditions and consistency. 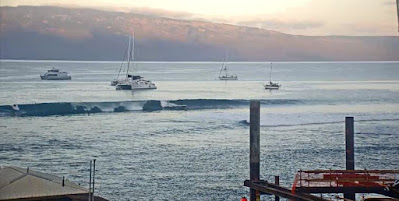 Tiny windswell only at Pauwela, another day of flatness on the north shore. 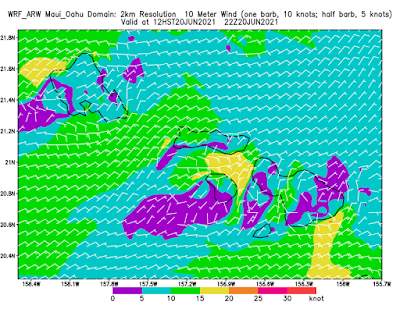 No photos from yesterday. This is a mind warping shot by Ben Thouard. 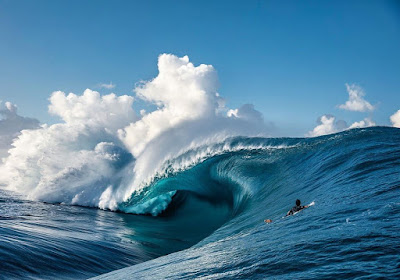 Second pulse of south swell on the rise today (1ft 20s at Lanai) while the first one still healthy at the buoys. Let's see how Pat Caldwell described the evolution of the fetch.

Below is the re-post of the maps of June 10 through 14 that will help follow.

Very small easterly windswells at Pauwela means that the north shore will be completely flat today. But don't give up on it. Check the fetch map below and you'll see that it's not quite over just yet. 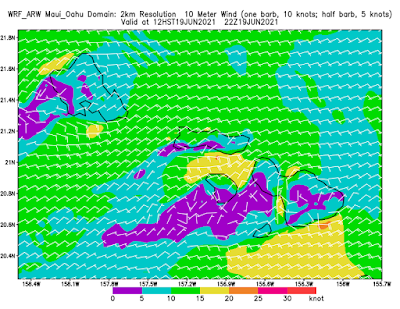 Both surfing and foiling were fun yesterday on the south shore. 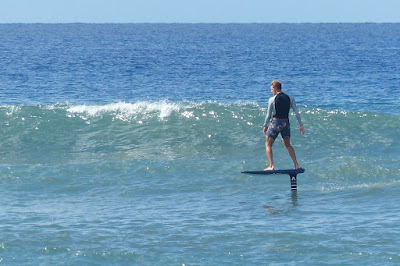 Second day of the long period south swell. The numbers at the buoys are good, check the Lahaina or Kihei webcams if interested, for size, conditions and consistency. 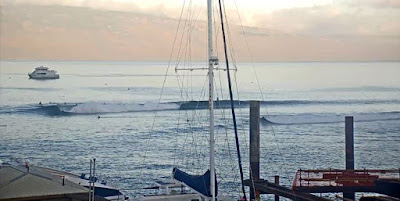 Small windswell only at Pauwela, home guess for Hookipa is around waist high at Pavillions. 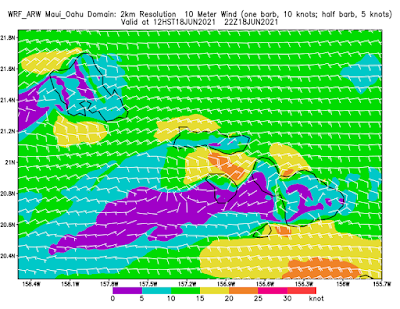 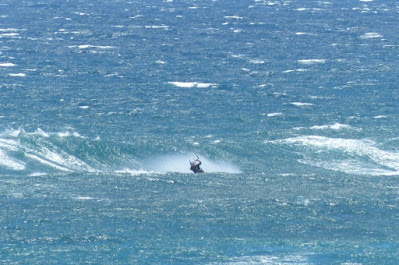 First one of two long period swells should be on the very slow rise all day today. Here's how Pat Caldwell described the evolution of the fetch:

A favorable pattern began to unfold SE to E of New Zealand and south of French Polynesia 6/10.

The first surface low pressure intensified 6/9-10 to the SE of New Zealand. The strongest winds reached severe gales during the earlier stages while the fetch was aimed more at the Americas. By late 6/10-11 it gained better aim at Hawaii though winds had weakened to mid-gales. As usual, higher swath of swell for this source is expected to miss Hawaii slightly to the east.

This first source should have slow onset (inconsistent larger sets) locally Thursday 6/17 from 185-195 degrees. It should be filled in a notch above average on Friday then slowly drop through Saturday from 180-195 degrees.

Below are the maps of June 10 thorugh 14 that will help follow.

It should be a good run of at least 7 days of waves ('bout time, this summer has been under average, imo). Below is the forecast for the Lanai buoy from this PACIOOS page. Biggest day should be Sunday with 3.6ft 17s at the buoy. Notice the two different pulses with their declining periods (dotted green and purple graphs) . 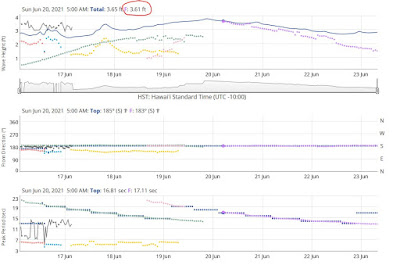 Both buoys do show 1 ft in the 18-20s period range, but don't forget how slow the onset of a distantly generated south swell can be. In this case, there will be a lot of angular spreading involved and that induces even less consistency. Most of the energy is in fact headed towards Central America, I should remember to check the Puerto Escondido cams in the weekend. Check the Lahaina or Kihei webcams if interested, for size, conditions and consistency.

Back to windswell only. Home guess for Hookipa is waist high and very weak. 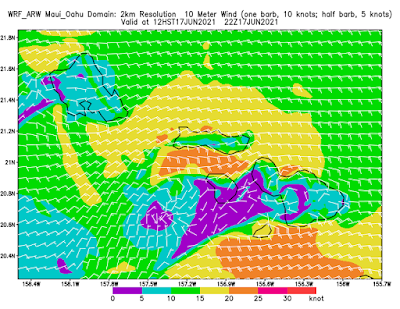 Hookipa yesterday mid afternoon. That's when I decided to go for session/discipline n.4 of the day. 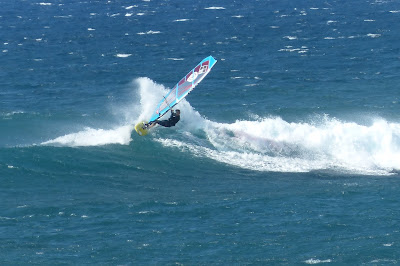 Here's a little update about my fingers, since some of you asked me about them.

I did the percutaneous release of three fingers on May 20th. When I did that, the tendons of those fingers were already inflamed (they had been for months before that). The procedure releases the A1 pulley of the sheath, but it obviously doesn't cure the inflammation, it only prevents it to get worse because of no more clicking and friction between tendons and sheaths.

Then I had to wait three weeks before I could get cortisone injections (which I did on June 10th) to bring the "old" inflammation down. A few days after that, my fingers felt a lot better, almost normal. I'm still trying to go easy on them, but yesterday I just went with the flow and ended up scoring fun sessions all over the island. At the end of the day, I had a big smile on my face... a magic sunset and a hot tub with friends were the proper ending to a special day.

I'll give my hands aproper  rest during the month of August, when I decided to do a road trip on the mainland. My car and studio will be available, hit me up if interested. 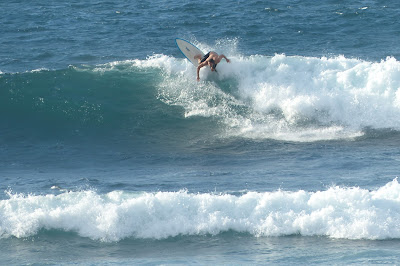 These photos make it look a lot better than it really was. 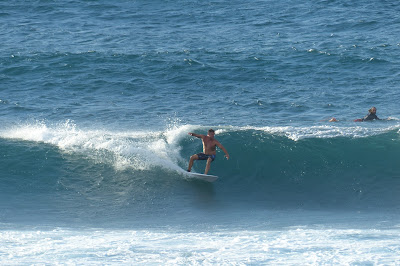 Although the swell peaked during the morning, there was still some size. But the shape was quite poor. 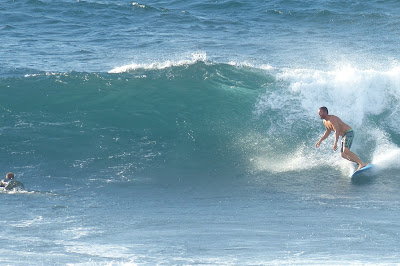 Launching a wingfoiler at Hookipa with the high tide and a short period swell is quite treacherous. That is a Cabrinha wing which, IMO, has the best handles: wide and stiff. I'm modifying the handles of my new F1 Strike 4.2 and I'll make a video about that. 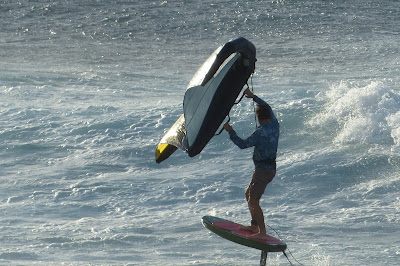 
1.5ft @ 13s from 179° (S)
0.3ft @ 22s from 185° (S)
Decent 13s southerly energy readings at the buoys, but what's noticeable is the very low 22s energy, sign of the long period swell that we're going to receive in the second half of this week. We'll look at the fetch tomorrow. Check the Lahaina or Kihei webcams if interested, for size, conditions and consistency. 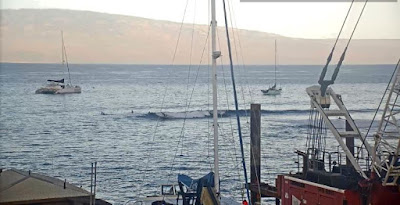 Still 3ft 9s at the buoys, home guess for Hookipa is around head high with decent conditions as the wind seems light this morning. 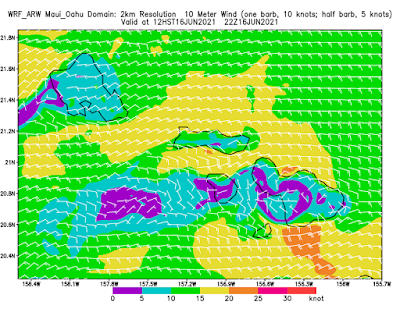 Hookipa yesterday at sunset had some head high ones and poor conditions (sideon wind). 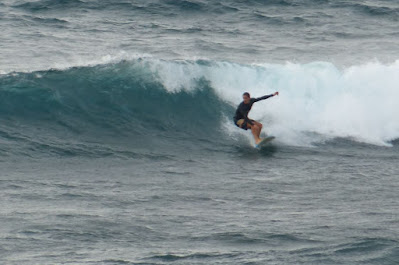 The numbers at the buoys are good, but only once in a while there's sets like the one below. Check the Lahaina or Kihei webcams if interested, for size, conditions and consistency.

NNE swell is peaking today. From Pat Caldwell's page:
A long-lived, slow-moving low in the Gulf of Alaska 6/9-12 aimed highest seas NE of Hawaii. There was a more direct aim of strong breezes beyond 1200 nm away 6/11 that gave the greatest surf potential for Hawaii.

Below are the maps of June 9 through 12. I put an arrow to show the low. Notice how I didn't even circle the fetch, as it never had direct aim at the time of the sampling (midnight every day). I believe it had better aim between samples but we're definitely getting a lot of angular spreading.

Below are the graphs of the N and Pauwela buoys together with the Surfline forecast. This last one was one foot smaller than it is at the buoy, I admit I was surprise too to see some head and a halfers in the lineup this morning (I surfed before writing this call).

As I reported, Hookipa was in the head to head and a third range, with some occasional head and a half sets. The wind is moderate and got a pinch of north more than usual. That makes for choppy conditions. 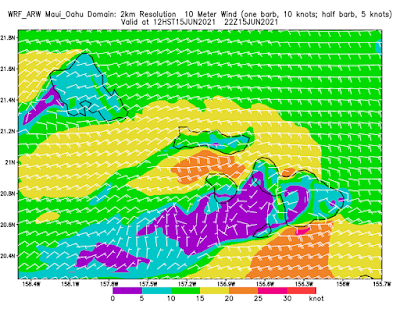