Best shot of the day, once again, Mr. Levi Siver.
He landed this goiter at full speed, perfectly planing and very smoothly on the wave face. 10 from the italian judge. 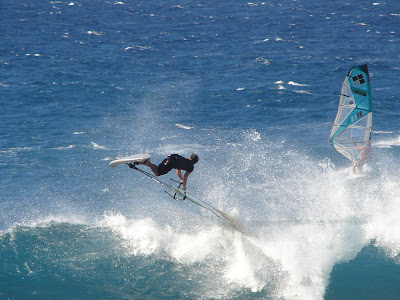 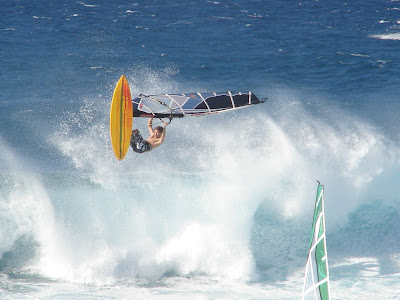 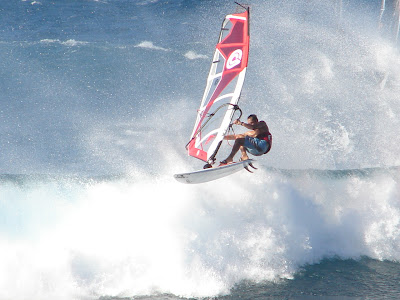 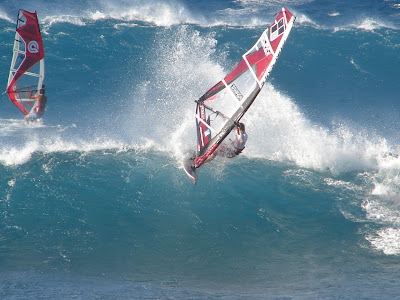 It should be tad smaller tomorrow (due to the shorter period), but at the same time also a bit more consistent and from a slightly more northerly direction (today it was barely over 300 degrees).

Now a few shots to show how crowded and intense Hookipa was.
Mark Angulo bottom turning, Keith Taboul emergency water starting, a guy just barely making over the wave on the right and a photographer... and that's only what you can see in this very zoomed photo! 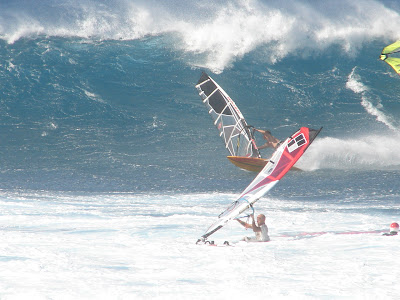 In this one instead (looks like somewhere else, doesn't it?), I counted 30 sailors. Why are all outside? Because they're waiting for a set! And when the set will come, all 30 of them will be on it!!! 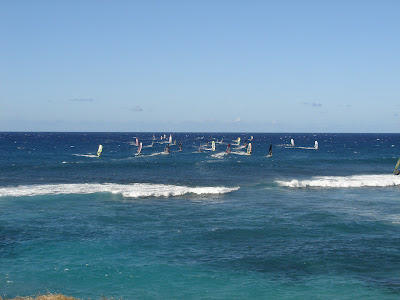 I don't particularly enjoy watching someone's butt (unless it's Anne Marie or Nori of course) when wave riding, so I sailed somewhere else at sunset and scored some of the smoothest waves ever... the trick is to pick the last one of a big set!
Like snowboarding on powder... just a little better! (I think it's more fun to ride something that moves and changes constantly...) 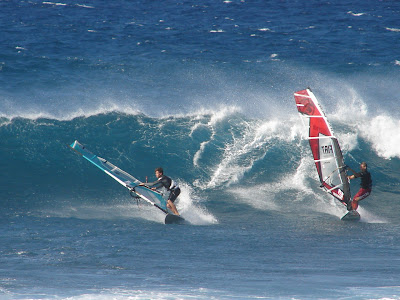 Jace Panebianco was in the water filming for the Windsurfing movie 2 (stay tuned for an interview) and that didn't help. In fact, that's when even the nicest guys drop in.
Take Levi, for example. Usually super respectful of the priorities, today I saw him dropping in a couple of times... 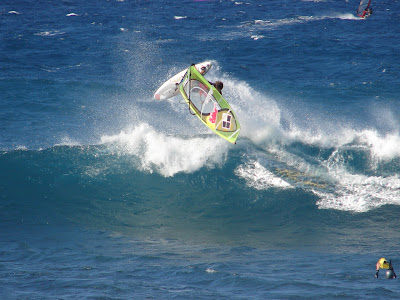 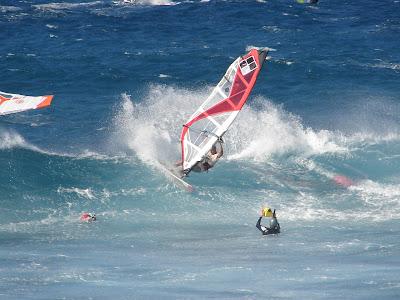 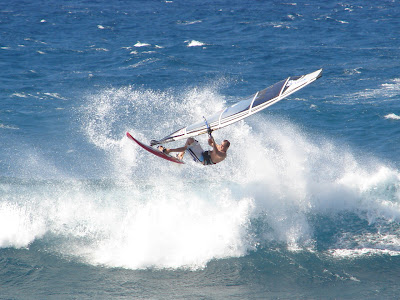 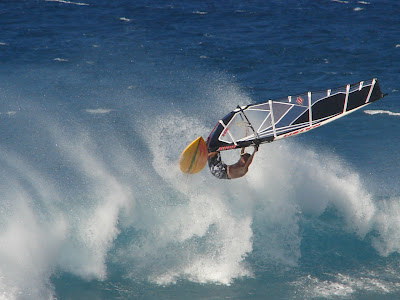 Francisco Goya is very busy testing twin fin prototypes. He told me:
"There's a lot of people that trust me. I can't make twin fin boards with my name just because the market wants so. I really need to like them... and now I'm starting to!" 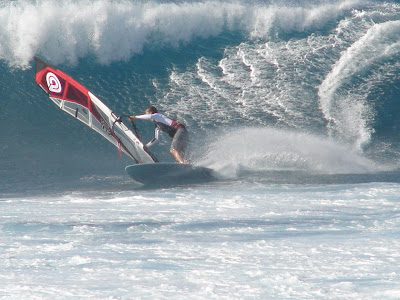 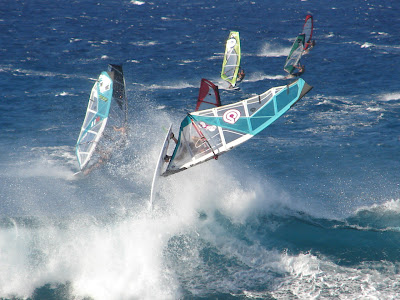 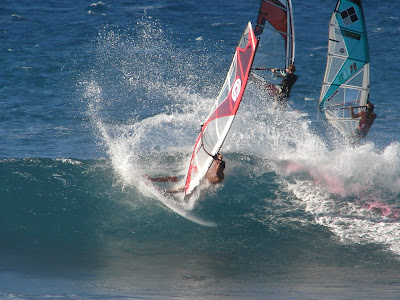 Finally, after all these boring windsurfing photo, what you guys really come on this blog for...
Oh what a lovely couple of siamese twins! Any spare room in that sweater? 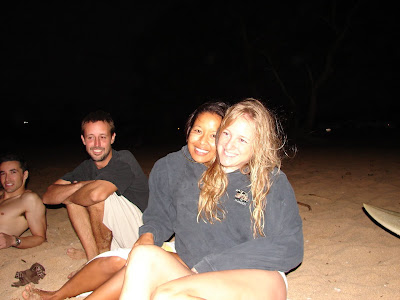 Last, but not least, I'd like to thank Summer of Kuau Mart who gave me a huge portion of noodles and meat balls.
Summer, you made my dinner...
Posted by cammar at Thursday, November 06, 2008

Nice to see lots of Quatro and Goya kit out there! Go team!

lot of pics, nice!! I really miss Maui.
afortunately we had some windy days too here in Argentina, actually it´s pickin´up, another sailing afternoon, thanks god.

lot´s of new goya sails ripping! have you tried them?

Hi Fish and Olaf,
yes definitely a lot of Goya sails out there. They also stand out thanks to the brilliant colors.
The other reason is that the Quatro/Goya team is probably the best here in Maui.
Other brands with really good sailors at Hookipa are Simmer, NP and Naish.
Said this, let me just remind you that best team doesn't necessarely mean best products...

No I haven't tried them, but I doubt I'd like them. I like the superfreaks, I dislike monofilm sails. They are the exact opposite.
SF: soft, forgiving, incredible high end range but not too direct and not with the best low end.
Monofilm: direct, responsive but at the same time punishing and body abusing.
I always use the car example: the SF are the cadillac of the sails (with great shock absorbers for the gusts), the Fire (just to make an example of monofilm sails) are the Ferrari's.
No doubt that the pros that sail Hookipa need every little bit of the power they can get out of the wind (and most importantly they are able to handle it!!!). That's why there's not many Superfreaks at Hookipa.
But if you go to Kanaha where the average Joes sail, the number of people using Superfreaks is impressive!
Depends on your age and body status too.
Jeff Henderson in person (over 40 and with a bad back) tests all sails he produces, but when he goes out for fun, he uses Superfreaks.
Cadillac or Ferrari? At my age, my skill level and for the lenght of my sessions, I'll take Cadillac thanks...

Great to see Mark A in the blog not once but twice. Cool board as well, I guess not everyone has switched to twin fins (at least not yet).
Thanks for another great post, only thing missing? Yep not enough YIKES!

I should trie a SF then! Cool. Great info.
I forgot, what happened with keith? (pic). Caught by the wave?

kuau mart!! the bacon egg and other good stuff roll WOW what a breakfast!!
i am think i am booking for january for two weeks , i know not good for wind , but its anniversary time, maui is good wind or not.
some local homies (3 shredders) heading there in two weeks , ones never been in maui, fer a week, wish i could go but arrrg there is a thing called "work" that gets in the way another thing called selling a house.
i am for the underdog ( lesser known or bought brands)when its comes to kit, but then there is price.. when a good deal comes around...

Windwiner,
actually counting also the "busy" photos, Mark is three times on this post...
He's always one to follow. He can pull the craziest move out of nowhere. And I have the clear feeling that he doesn't even know exactly what he's trying to do... he just goes by the feel.
I'll ask him if that's true.

Olaf,
I don't remember, but I bet he did make it. Hookipa veterans have many skills. One of them is emergency no wind water start...

Jeff,
tell your buddies to drop me an email if they need car/accomodation.

Everyone,
don't expect a day 2 post. I got no photos. But I can do a lil report here. Very offshore, super gusty and up and down with the squalls wind. From zero to 10, in my personal scale the wind quality was 1 today. Again, thank god (or Jeff) for the Superfreaks, otherwise I would have hated (and ate) it today.
Instead, I was able to catch a few leftover bombs that the offshore wind made pretty damn smooth.
So difficult though... my arms are sore.

Tomorrow (saturday) the waves should be a lot smaller.
Don't miss the sale a Simmer in Paia!
I also heard that there's a Goya demo day sunday at Uppers, so maybe I will try one of those sails. No wait, Sunday a new swell will hit. The wind will still be nuking and offshore... I'd rather stick the Freaks.
Another big NW swell on Wednesday.

Really great pics as usual, though short on the Yikes, I guess you don't want to become a stalker or papparazzi (SP?)!

I've been waiting to hear your comments on the election result, you always have an interesting perspective on this, and its interesting being Hawai'i; or are you completely sick of the election by now? This one seemed very different though.....

I'm pretty sick about politics in general, but I'm full of hopes.
Doing worse than Bush is going to be impossible...

G demo day at upper do they launch at kanaha or camp one.
heres a dumb question , whats the deal at camp one i have never sailed there. Can anyone launch there ??is it closed to the public.

For Upper Kanaha you launch at Upper Kanaha...
For Camp one you can sail upwind from Uppers or downwind from Sprecks (it's right there).
Good for jumping, not my kind of place.

Don't expect a day 3 post either. Had a lesson first and then spent the rest of the afternoon sailing Hookipa that was again super strong/gusty/offshore. Thanks to my 4.2 superfreak, I survived gusts that felt like 40 knots and managed to have way more fun that I thought I would.
Thanks also to my 68l custom Quatro, of course.
As usual, I didn't win anything at the late afternoon lottery at Simmer...

The new swell is going to hit late tomorrow, so there is definitely a chance that I'm going to go try the Goya gear...