Fun size on the Lahaina side yesterday, here's the VLOG of the day.

Unfortunately the Surfline page where I read the buoy readings is not available this morning (link n.11), so here's Pat Caldwell's words: Mid Wednesday on southern shores has a combo of the Krosa swell aforementioned, and a declining New Zealand event. The former should stay about the same on Thursday with the latter dropping.

The NOAA page for Hanalei reads
and this might be a rare case in which that's exactly what's in the water, since, as uncle Pat adds confirming what I wrote yesterday: The PacIOOS/CDIP nearshore buoys off Hanalei, Kauai 8/14 give the best sampling since it does not receive the overlapping south swell

That's it, without buoys it's hard to do an evaluation, but fortunately there's webcams in Lahaina and Kihei, so you guys check both and decide.

North shore should be flat to tiny.

Also Krosa made landfall, so no more waves from those guys. But there's a bit of a fetch in the NW corner of winter memories...

The strong fetch that made next week's swell is now aiming at the Americas, not much else behind it. 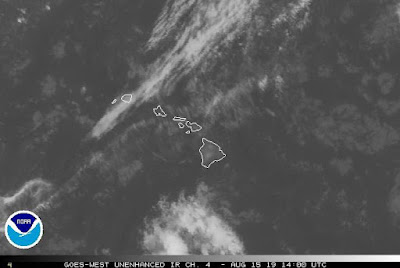