Well, yesterday I did look for a decent place to surf and took the camera out trying to shoot something decent, but I failed at both tasks, so here's a shot of Desert Point which I saved a while ago and forgot to write down the source. 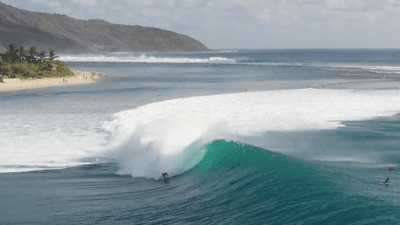 4am significant buoy readings and discussion
South shore
No indication of southerly energy at the buoys, check the Lahaina webcam if interested.

Pauwela
10.3ft @ 11s from 70° (ENE)
4.7ft @ 14s from 330° (NW)
2.8ft @ 4s from 70° (ENE)
2.7ft @ 18s from 319° (NW)
New NW swell(s) on the rise, here's how Pat Caldwell described the evolution of the fetches:
A low pressure near 40N, 170E moved west 1/5-6. The PacIOOS/CDIP Waimea, Oahu near shore buoy shows this energy Friday 1/10 in the 14-16s band. This event should be short-lived as a new event takes over 1/10 PM.
A low pressure gained storm-force as it tracked ESE from the Kuril Islands 1/6-7. Seas grew over 30 feet over the 305-315 degree band relative to Hawaii in an area about 2000 nm away from Hawaii. The low weakened rapidly 1/8 as it was forced northward by the jet level ridge. A secondary low pressure moved east from Hokkaido 1/6 and merged with the Kurils low 1/7. The secondary low had a fetch of gales to severe gales over the 290-305 degree band. The dominant swell is expected from the former though the secondary low should add lower, more westerly-component surf.
Can't show you the fetch maps, as the first one I posted upon my return was the 8th, we'll just trust uncle Pat. Below is the graph of Waimea, which is the only one that shows clearly the two pulses of the NW energy (red circles), the other buoys are just too hammered by the ENE energy. As you can see, there was a clear bump up over night which will translate into a similar one locally this morning. 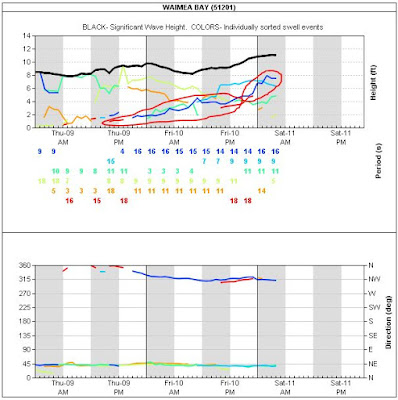 
Once again, it's mostly about the windswell fetch today.

That nice fetch deep in the Tasman Sea is still there. 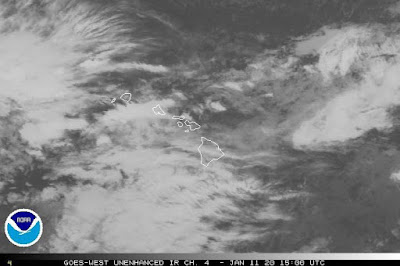