Here's a moment of the action at Hookipa yesterday. Btw, I read the news that Hookipa and a few other parks (like Paia Bay, the Canoe Club one in Kahului and Waiehu beach park) should re-open today, but only for the allowed exercise activities (walking, running, and water sports). 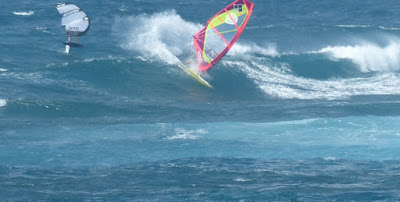 Small southerly energy at the buoys should make for small waves on the south shore. Check the Lahaina webcam if interested, for size, conditions and consistency.

No sign of the new expected NNW pulse at the outer buoys. Let's first have a look at what Pat Caldwell wrote on Wednesday (timing is for Oahu):
The next low under the zonal jet formed 4/28. ASCAT satellite 4/28 AM showed a fetch of near gales with pockets to gales mostly north of 38N near 174W. By 4/28 PM, the maximum winds had moved to the same latitude at 164W. There was very little fetch extending south of 38N and the aim of the strongest winds was more NE of Hawaii. Thus, this event is expected to be lower than the 4/29 event.
The new event should fill in Friday from 325-345 degrees, peak late Friday near the May average, then drop into Saturday. Consequently, he put 3ft 13 for Friday in his table.

Below are the maps of April 28 and 29 that show the fetch. 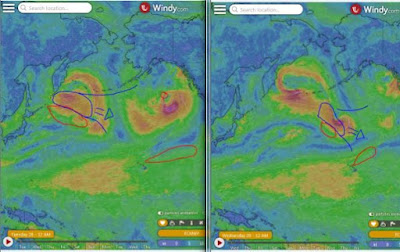 If we assume the usual 12h delay in the Surfline forecast, Caldwell's prediction is confirmed there too (actually even bigger). 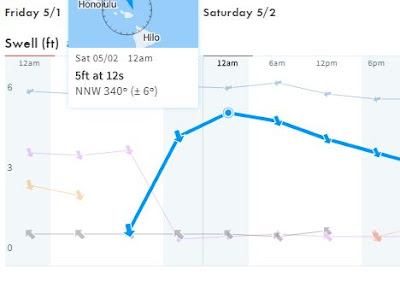 But, as noted, unfortunately this pulse seems to have vanished into the ocean. I think it's either just missing us to our NE or is still on its way (I think the first one). Either way, what we have for the day (at least the start of it) is what is at Pauwela. Hookipa will still be probably overhead, but totally blown out by the strong trades, which are predicted to continue for the next few days before relaxing a bit mid next week. Not a great day for surfing, seek sheltered spots.