This photo was posted by Mataio Tahiti. That's the big south swell on its way to us. 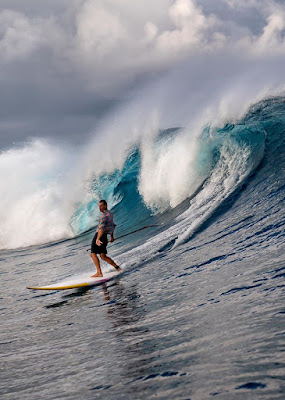 This instead is my pick of Jimmie Hepp's gallery of yesterday's action at Hookipa. 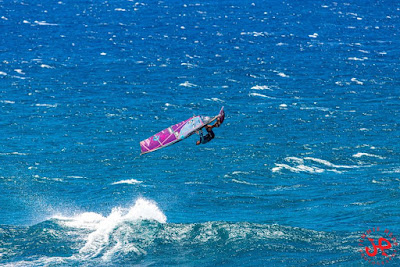 New long period energy at the buoys is on the slow rise while background 13s energy persists. Here's Pat Caldwell's detailed description of the evolution of the fetch:
The wintry cyclone tracked steadily eastward along 65S to the S to SE of New Zealand 5/7-8, as a front backed by gales pushed NE off the east side of New Zealand. Seas aimed at Hawaii were highest to heights over 35 feet at the onset while the New Zealand shadow made for a narrow fetch, which lowers Hawaii surf potential. As the system moved further east 5/8 and allowed a wider fetch, there was an overall weakening of surface winds with less direct aim to Hawaii. Thus, this event for Hawaii is not expected to be an exceptionally large event, just a stock-standard, above summer average event centered from 190 degrees.

The PacIOOS/CDIP American Samoa buoy 5/10-11 showed the swell passing by at moderate levels with deep water swell around 4 feet. Wave Watch III places this buoy location west of the highest swath, with the Papeete output much larger to over 10 feet predicted for Monday night 5/11. This makes for larger error bars on the local surf estimate with the potential for a near miss to the east. Stay tuned to updated NWS surf forecast updates Thursday into Friday as the swell trains roll under the NOAA southern Hawaii buoys.

Low, long-period swell from within 180-200 degrees could make for infrequent sets to levels near the summer average after sundown Wednesday through Thursday morning. The event should slowly build Thursday PM to levels above average for the larger sets. The event from 180-200 degrees should peak on Friday above average. Swell from this direction should slowly trend down Saturday into Sunday as new swell builds from 170-190 degrees.

The low pressure system SE of New Zealand 5/8 occluded 5/9 south of French Polynesia near 60S, 155W. The center of low pressure stalled as a strong high pressure formed over and east of New Zealand. This set up a long, wide fetch with direct aim at Hawaii over the 170-190 degree band 5/9-10 of mostly gales and pockets to severe gales. Seas rose again above 30 feet with highest seas south of 40N or about 3800 nm away from Hawaii early Sunday.

Long period forerunners from 170-190 degrees are expected on Saturday keeping breakers above average with a rising trend. Wave Watch III output for southern Oahu keeps this direct S event under 3 feet deep water swell. More times than not, the Wave Watch III tends to bias low in swell height. Given that the occluded phase had a more direct aim and a closer head of the fetch, this more direct S event should be a notch larger than the SSW component of 5/14-16. The event should be filled in on Sunday 5/17, peak Sunday night, then remain above average on Monday 5/18 from 170-190 degrees.

Below is the collage of the maps of May 7 through 12 that will help follow.

As uncle Pat reminds us, the onset of distantly generated long period swells can be very inconsistent, check the Lahaina webcam if interested, for size, conditions and consistency.

Pauwela still shows 3.5ft 13s from the modest NW swell we had the last couple of days, but the upstream islands show that the period is going down soon. Tomorrow there should be the arrival of a new much larger NW swell, but today we're dealing with small waves (Hookipa might still be head high). The lack of wind will ensure very clean conditions.