Massive reunion of wing foilers at the harbor. I counted 35 wings in the water at least 20 more on land. Jimmy Hepp was there and he posted this gallery of photos, out of which I selected this action shot of Annie Reickert... 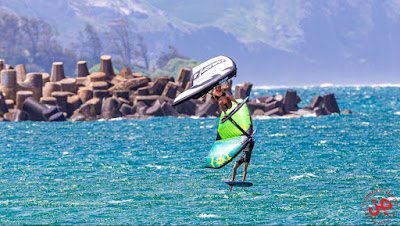 ... and these two other ones that show how incredibly beautiful she is. 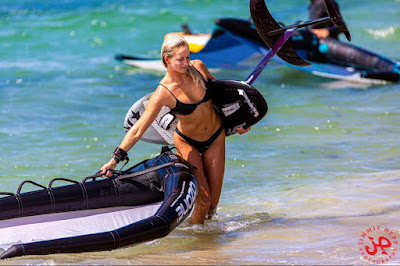 The atmosphere was quite special and many commented that it felt like when windsurfing started 40 years ago. I ran into this video of a kitefoiler explaining why he likes the wing so much and I have to agree that the feeling of body freedom given by the possibility of parking the wing in neutral when riding a wave is the most attractive feature for me. 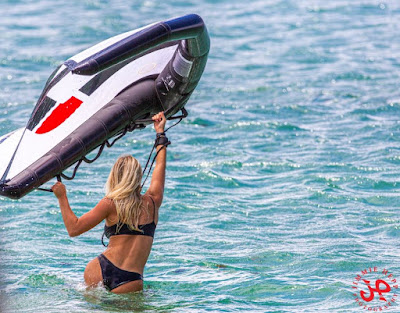 Meanwhile, the Jimmy-less windsurfers were still ripping at Hookipa. 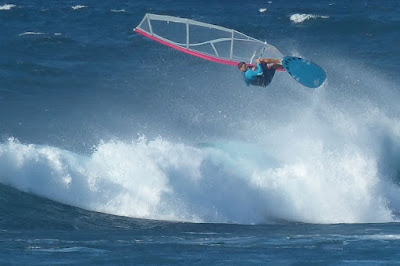 Small southerly energy at the buoys, check the Lahaina webcam if interested, for size, conditions and consistency.

New NNW swell is at the buoys, here's Pat Caldwell's descriptioin of the evolution of the fetch:
The last in the series of surface low pressure systems tracking rapidly east along 40N from the Date Line to the Gulf of Alaska began its course Friday 5/1. ASCAT satellite Friday night showed a large area of strong to near gale winds within 40-50N, 170-180W over the 325-335 degree fetch band. The fetch over the 330-345 degree band was closest to Hawaii Sunday morning about 900 nm out. The low is moving east of the Hawaii swell window Monday 5/4.
NW Hawaii NOAA buoys 51001 and 51101 show a mild increase in the 10-12s band since midnight Sunday night. Wave models suggest these buoys west of the primary swath that favors Hawaii with a gradient upward to the east. The PacIOOS/CDIP Waimea Bay, Oahu buoy shows an upward trend mid day 5/4 in the 12-14 second band.
The event is expected to fill in Monday PM 5/4, peak Tuesday 5/5 from 325-350 degrees above the May average, then steadily fall Wednesday 5/6 to levels below average by sundown. Low conditions are predicted for Thursday 5/7.

Below is the collage of the maps of May 1, 2 and 3 that will help follow.

Hookipa will be overhead and with the NNW direction, all the spots of the north shore (and the west side) will have some waves too.