Another day of full immersion into winging for me yesterday. This time, courtesy of Julie Winner, I got to try two Duotone wings: a 5.0 Echo and a 6.0 Unit (pictured below). I'm not skilled enough to do technical reviews yet, but I can tell you one thing.
Just like with the underwater hydrofoils, pretty much everything works, but they're definitely not all the same. Even subtle differences have pros and cons and personal preference plays a huge role. And the personal preferences evolve as your skill evolves. 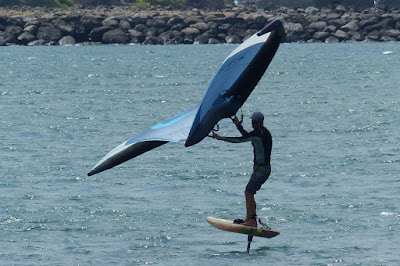 Take the boom, for example. The list of pros and cons I can mention is already pretty long, but I'm just going to state a pretty basic fact: every time you have to move your hands, the boom is obviously better because you're not restricted to a limited amount of strap positions (sometimes I even had to look at the handles to make sure I grab them, even though that might not be necessary anymore once you get used to your wing). Also my trigger finger likes it better (the tighter I have to close my hand, the worse). Despite all that, I ended up liking the boomless Unit better. 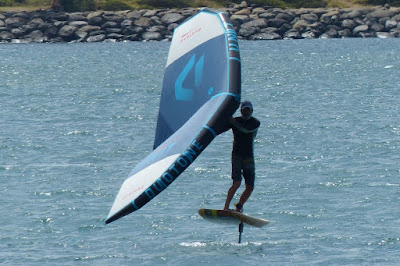 Another evident difference between wings is the presence or not of a window. In the photo below, I'm on the windowless Unit and Nori is in front of me on a Naish with windows. Windows are for safety. Without a window, unless you're absolutely sure to be alone in the water (and even then, you might want to know if there's any turtles downwind of you), before you enter a jibe, you have to lift the wing over your head (which makes you lose a bit of power) to make sure the water is clear.

The ideal window position is right in the middle (where the central strut is), which is where the original Duotone wing and the Echo have it. Nori instead will have to lower her wing a bit, before she can see what's downwind of her. But, at least, she can do that without losing power. Downside of the windows? They add a bit of weight and you lose a bit of crispness in the feeling.

Again, those are just two examples of design differences, but there's tens of them. And once again, every wing works and they all kind of look the same, but they're not. Try as many as you can and see what works for you is my advice. I consider myself very lucky that I got to try so many wings already... before I even own one! Keep them coming! 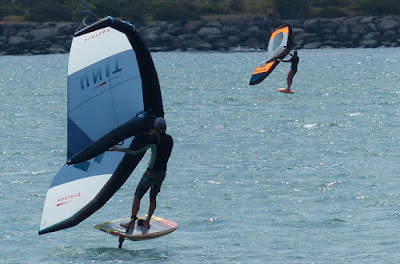 Lovely south energy continues at the buoys. Check the Lahaina webcam if interested, for size, conditions and consistency.

New NNW swell on the rise all day. Below are the maps of May 5 and 6 that show the fetch that originated it. It's another case (third or fourth in a row, I forget) of a low that was quickly moved east by the zonal jet stream and was aiming its most intense winds to our NE. Thanks to proximity and angular spreading we're still going to get a swell, but it's hard to say exactly how big. Surfline has it peaking at 5.3ft 11s from 345 at 6pm which, for a change, this time seems a bit early and optimistic to me. 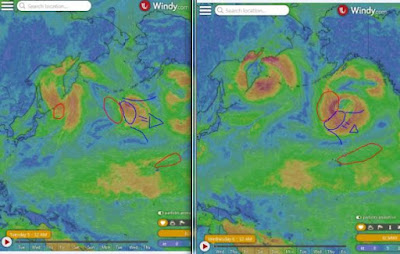 As of now, the readings at Pauwela make me guess the usual head high (possibly plus) at Hookipa with poor conditions due to the sideon wind.