First, this is Jason's video of the foiling session from two days ago. I posted it late yesterday, so here it is again. I think he really captured how much fun foiling on waves (in all its facets) can be. A catchy bass lines is a nice plus.


Let's talk about yesterday now. As reported from the beach, the early morning conditions were excellent. I guess to get barred on this wave, you have to slide into it right at the takeoff, JJF style. 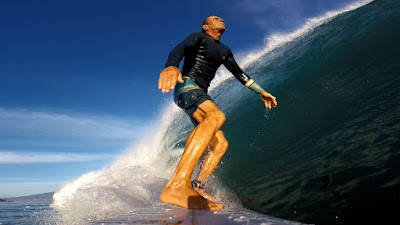 Down the line, in fact, it turned into a cat size barrel. Not enough room for a human, not even JJF. 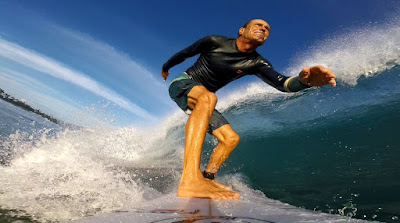 Here's some pics I took after my session, starting from three top turns. 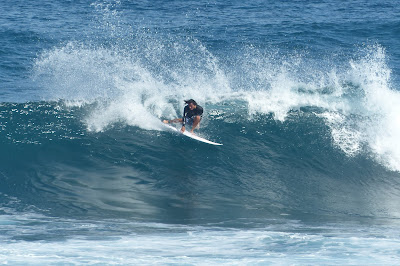 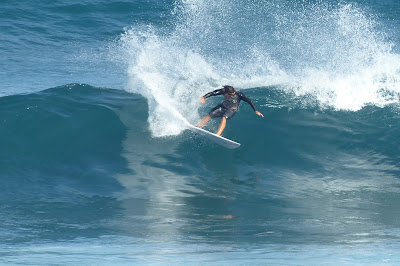 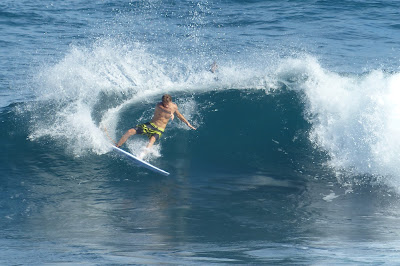 Paige Alms looked like Bethany Hamilton in this sequence, until her back arm eventually appeared (it was perfectly covered by her front arm for the first three shots). 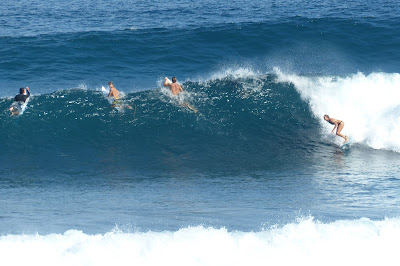 Notice the other surfers waiting for the aerial, which did happen down the line. 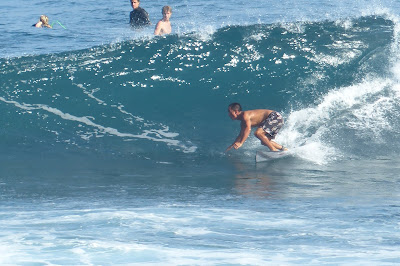 Been watching the webcam while making this post and the energy in the water is not as exciting as the buoy readings might suggest. Again, webcams more reliable than buoys, always.Check the Lahaina webcam if interested, for size, conditions and consistency.

Tricky swell to predict this one. It didn't quite grow during the day as I was expecting yesterday. The reason is explained by Pat Caldwell below. Lots of directional spread and bulk of the energy missing us to our west.
A sharpening jet stream trough N to NNW of Hawaii 10/13 pinched off into a gyre 10/14-15. The gyre has been slowly shifted SSW. At the surface, a SSW- to NNE-elongated low pressure zone stretching from the subtropics to the Gulf of Alaska set up a long, wide fetch aimed highest just west of Hawaii. It will allow a broad direction spread to the incoming surf locally. The NW direction given in the table above is nominal. Further north of 40N up to the eastern Aleutians, there was a fairly close aim at Hawaii 10/14-16. Winds were mostly near gales with seas within 12-15 feet. This more 330-350 degree energy should be on the rise Saturday, peak Sunday night, then slowly drop into Monday. Highest seas to 20 feet have formed over the past 24 hours on the west side of the primary low pressure center that is immediately NNW of Hawaii near 30N, 165W 10/16. These seas are directed at targets west of Hawaii. Angular spreading can deliver some wave energy to Oahu. This aspect adds larger error bars to the local surf estimate.
I posted this collage of the maps of Oct 12 through 15 yesterday already, but it might be necessary to follow uncle Pat's description above.

Hard to predict what to expect today with the NW buoy up to 9ft 11s (but I don't think that energy will all make it here) and Waimea around 4.5ft. But there will definitely waves at Hookipa. Overhead is my guess from home, beach report coming up before 7.30am. Wind map at noon .The other ones can be found at link n.-2 of GP's meteo websites list in the right column (click on animation of the 10 meter column). 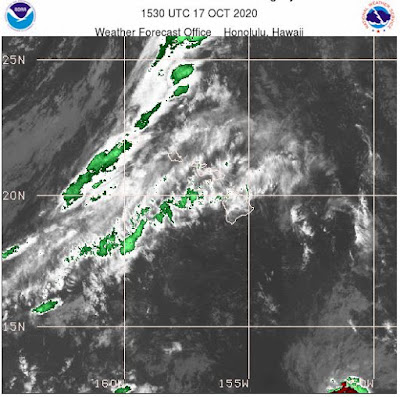