Another great day of surfing yesterday.

3am significant buoy readings and discussion.
South shore
No southerly energy registered by the buoys. But there's NW energy in the water, so that might override any possible low southerly energy. Pat Caldwell mentions that there could be something:

The larger event he mentioned was generated by the same fetch once if moved east of New Zealand, we'll analyze that in a couple of days. Below are the maps of Sept 25, 26 and 27, which show the Tasman Sea fetch. For sure Fiji got some big waves, but check the Lahaina webcam if interested, for size, conditions and consistency, to see if and how that energy made it here. 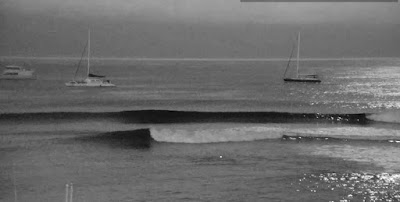 These series of NW to N pulses has followed a complex patterns of lows (read Pat Caldwell if interested), some aiming more to our east, some more to our west. I believe that's the reason why yesterday afternoon the swell did not pick up locally as I suggested. Today both the NW buoys and the N one show elevated numbers, so we can be guaranteed that that energy will hit us. As a matter of fact, Pauwela is showing almost 7ft 13s (plus more energy at 11s), and it should stay fairly steady all day, before starting to decline during the night. Below are the graphs of NW001 and Pauwela, together with the Surfline forecast. Hookipa will have waves in the double overhead range with clean wind conditions in the early morning.