This is my pick of Jimmie Hepp's album of yesterday action at Hookipa. 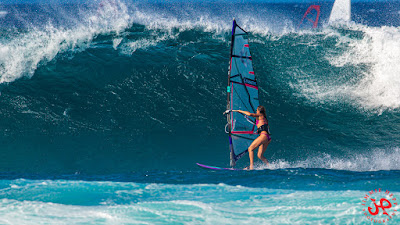 4am significant buoy readings and discussion.
South shore
No southerly energy at the buoys, check the Lahaina webcam if interested, for size, conditions and consistency.

A couple of new NW swells are predicted to arrive during the weekend. Here's how Pat Caldwell described the evolution of the fetches:

1) Low to medium gales behind an east-moving front west of the Date Line north of 40N 11/16-17 grew seas near 20 feet. The winds were much less and seas much lower than the source in the similar area that produced the 11/19 event locally. Thus, the dominant wave period is expected to be shorter, along with the arriving swell height, resulting in small to moderate breakers. This short-lived event should pick up Saturday from 310-335 degrees and peak late Saturday PM well below the seasonal average, then drop into Sunday.

2) The next fetch set up 11/18-19 between the Kuril Islands to the Date Line north of 40N, with a similar eastward shift behind a front. The front reached 40N, 160W, NNW of Hawaii, by early Friday 11/20. It is modelled to be east of the Hawaii swell window by late 11/20. A long, wide fetch of lower-end gales grew seas 15-20 feet, nosing to near 1200 nm Friday. The lower wind speeds mean the dominant wave period of the swell will lean toward moderate levels of 12-16 seconds. The event is expected to build mid Sunday from 310-345 degrees, peak Sunday night near to a notch under the average, then slowly decline Monday from the same direction. With the tail of the fetch 2400 nm away early Friday, the decay phase of the event should be long-lived in the small category. This source should keep small breakers Tuesday into Wednesday from the same direction.

Below is the collage of the maps of Nov 16 through 20 that will help follow the above description. I numbered the two fetches for your convenience. Look at the fetch on the map and then go see (even better surf) the swell and you'll build a valuable knowledge.

The buoys show pretty low energy from the first one (assuming those 2ft 14s at Waimea are that), so I wouldn't expect this one to be particularly big. More energy will be provided by the elevated ENE windswell shown by Mokapu. Conditions will be pretty horrible everywhere on the north shore, due to the very blustery winds predicted over the weekend. It's also true that usually those winds in winter time bring a lot of rain, so in between squalls there could be windows of decency.

Home guess for Hookipa this morning is head high and blown out. Wind map at noon .The other ones can be found at link n.-2 of GP's meteo websites list in the right column (click on animation of the 10 meter column). 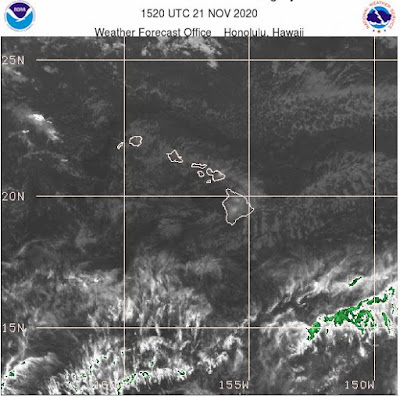