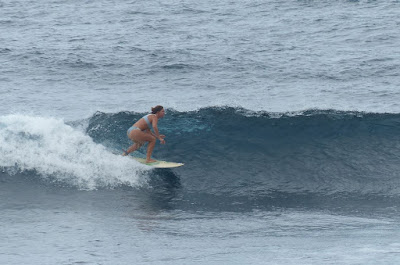 Very small southerly energy at the buoys,check the Lahaina webcam if interested, for size, conditions and consistency. I've been watching for a while and haven't seen a single set breaking at the harbor.

Very little energy leftover from the NW is still recorded by Waimea, but I doubt it will play any role at all. What we have to start the day is mostly the easterly energy shown by Mokapu and Hilo. So small waves at Hookipa and the eastern exposures is my call. Things might improve later today as new short period energy should start filling in this afternoon. Here's how Pat Caldwell descbribed the evolution of the fetch:

1) A large area of surface low pressure has filled the NE Pacific 11/13-16. The fetch aimed at Hawaii has been well sub-gale over the 345-010 degree band though the head of the fetch has reached to 28N due north of Hawaii Monday morning. Proximity increases surf potential. Short-period waves from this nearby source should trend breakers up locally Tuesday PM, though well below the seasonal average.

ASCAT satellite 11/15-16 showed near gale breezes over a wide, long fetch further NNE of Hawaii north of 35N with highest seas aimed NE of Hawaii. This should send short- to low-end moderate-period swell by Wednesday in the 10-12 second band that should keep active, below average breakers from 000-020 degrees. It should trend down Thursday.

A second source of longer period energy that should pick up late Wednesday (proably Thursday for Maui) is described below.
2) Further west, a compact, low-pressure system moved east from the Kuril Islands 11/14 with fetch of gales over the 310-320 degree band. Central pressure dropped to 976 mb 11/15 as it occluded near 50N, 175E. Winds increased to storm-force with seas near 30 feet aimed highest NE of Hawaii in an area about 2000 nm away. The system moved NNE into 11/16 as it weakened sharply. The remote distance lowers local surf height potential and makes for less consistent sets, just as was observed from this past weekend`s event of similar source region.

Long-period forerunners are due locally late Wednesday PM. The event should be filled in Thursday morning and peak Thursday PM near to just below the seasonal average from 310-330 degrees. The event should trend down Friday into Saturday as the swell height and dominant wave period slowly drop from the same direction.

Below is the collage of the maps of Nov 13 thorugh 16. I numbered the fetches accordingly to the above description.

As you can see, there's a lot of angular spreading involved in the first source, as most of that energy will miss us to our east. That always makes the prediction of the size particularly challenging, we'll have to wait and see what we get.  Wind map at noon .The other ones can be found at link n.-2 of GP's meteo websites list in the right column (click on animation of the 10 meter column). 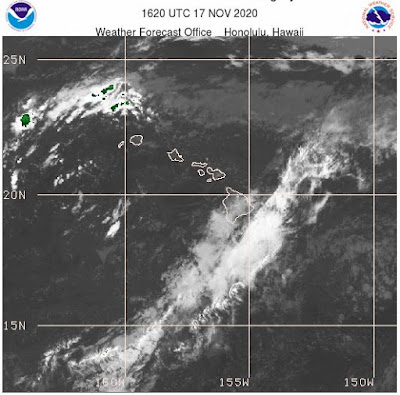