Conditions were good once again yesterday morning at Hookipa. I'm developing a new appreciation for short period waves, as they peel a lot better on most of the north shore's reefs. 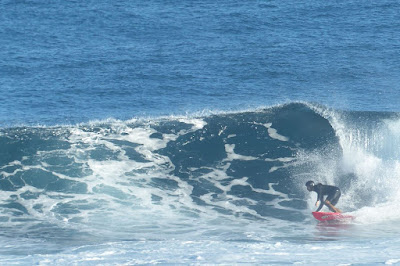 I'm taking a break from foiling (healing a hip pain), but of course I follow my foiling buddies on the social media. This is Eddie in a photo by Art that, as Art points out, shows why most foil boards have beveled rails. You lose a bit in stability (compared to full rails) when paddling, but you touch the water less when carving. 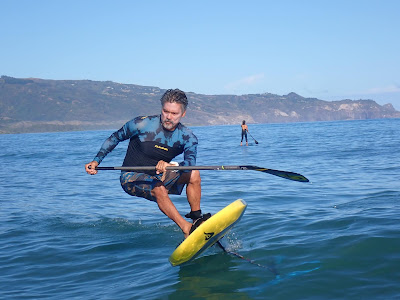 Almost nothing from the south. Check the Lahaina webcam if interested, for size, conditions and consistency.

New long period NW swell predicted to pick up during the day, the buoy readings don't look particularly good at all. Let's see how Pat Caldwell described the evolution of the fetch:

A surface low-pressure system deepened rapidly 10/28-29 as the system raced NE from west of the Date Line. Severe gales to storm-force winds set up over the 305-320 degree band during the first 24 hours, though the fast track made for a limited fetch in length and duration. Below-average, long-period forerunners from this directional band are due locally near sundown Saturday 10/31. The low-pressure center dropped to 968 mb 10/29 as the track stalled near 50N, 170W. Highest seas to 30 feet were aimed at targets NE of Hawaii, while mostly 20-25 feet seas aimed towards Hawaii north of 45N. The low has remained nearly stationary for 24 hours into 10/30. Surf from 320-335 degrees is predicted to steadily rise Sunday to levels above the November average by the afternoon, with surf from this phase of the source peaking Sunday night. Heights should hold above average into Monday morning from the same direction.

Below are the maps of Oct 28 through 31 that will help follow. Red arrow is the remote fetch he described. Black arrow is the closeby fetch which has been providing those super fun short period peaky waves.

Below is the Surfline forecast for today and tomorrow. With the NW buoys only reading about 3ft 14s, there's no way in my opinion that this swell will go up to the predicted sizes (5.2ft 15s by Surfline and 6ft 16s in Oahu by Caldwell). At least not today. A bit puzzling really, as the fetch looked decent. Maybe those 3ft 14s are from the very early stages of it, maybe tomorrow we'll get more energy from the later stages. We'll find out, but today it's mostly about the short period northerly energy again. Should be similar to yesterday, will report from the beach later. 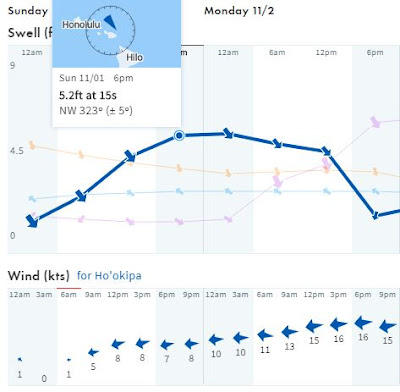 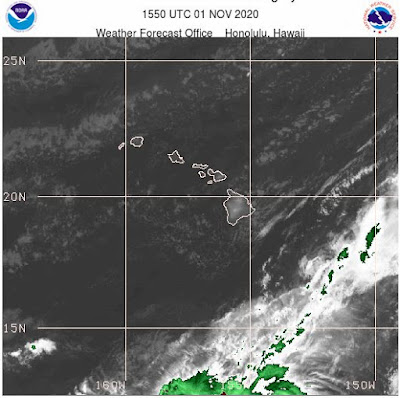