Another day of waves on the north shore, this is my pick of Jimmie Hepp's album of the windsurfing action at Hookipa. 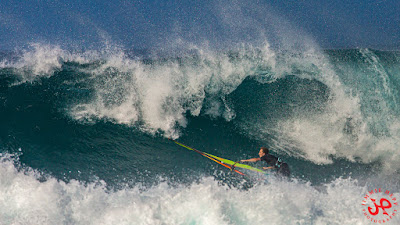 I took this shot at sunset. Lots of weight needed on the front foot in this bottom turn. 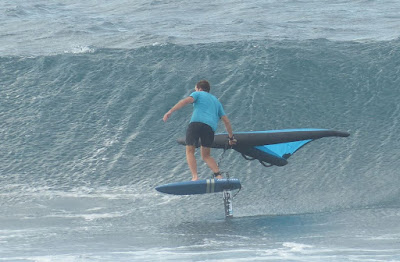 New long period SSW energy at the buoys, let's see how Pat Caldwell described the evolution of the fetch:
A low-pressure pattern stronger and broader than normal for the austral spring season set up in the mid to high latitudes south of French Polynesia 10/27-29. Winds reached within gales to storm-force over a wide, long fetch aimed highest at the Americas, though a portion of the weaker winds directly aimed at Hawaii. The wide, long fetch aspect gives greater surf potential for Hawaii. The system moved east of the Hawaii swell window 10/30. The onset stage of the long-period forerunners is due late Tuesday from 180-190 degrees. The event should be filled in near to above the summer average late Wednesday and peak on Thursday from 170-190 degrees. With the large source, the event should be long-lived with a slow downward trend 11/6-7 from the same direction.

Below is the collage of the maps of Oct 26 through 29 that will help follow the above description.

Check the Lahaina webcam if interested, for size, conditions and consistency. Unfortunately it doesn't look like much, you never know what we're gonna have in the water with these angular spreading swells.

New long period WNW swell should overlap to the existing NNW one (4ft 12s at Waimea) throughout the day, but probably only be visible late in the day (if at all), seen the westerly position of the fetch in the beginning. Plenty waves to play with before that anyway, Hookipa probably still overhead. Here's Pat Caldwell's description of the evolution of the fetch:
A new complex pattern set up within 10/31-11/2 and is expected to keep overlapping events locally with remote, NW long-period and a NW to N short- to moderate period energy, part of which was just aforementioned. The pattern started off Saturday with a severe gale moving east along 50N from the northern Kuril Islands. The head of the fairly narrow fetch over the 310-320 degree band reached about 2000 nm away by Sunday with seas 20-25 feet. Long-period swell from this remote source is expected to build locally Wednesday PM from 310-320 degrees, peak overnight a notch under the fall average, then slowly drop into Friday centered from 315 degrees. The low center has crossed the Date Line 11/2 with near gales about 1200 nm away over the 310-330 degree band. Models show the fetch nosing to near 800 nm away 11/3 as the winds slowly weaken mostly over the 320-340 degree band. Proximity should bring a rise locally Thursday with this pulse peaking Thursday night to near the average. Moderate surf should hold on Friday with a slow downward trend.

Below is the collage of the maps of Oct 31 through Nov 3 that will help follow the above description.

Wind map at noon .The other ones can be found at link n.-2 of GP's meteo websites list in the right column (click on animation of the 10 meter column). Fetches map (circles legend: red: direct aim, blue: angular spreading, black: blocked, yellow: apparent direct aim, but out of the great circle ray map, so not 100% sure). 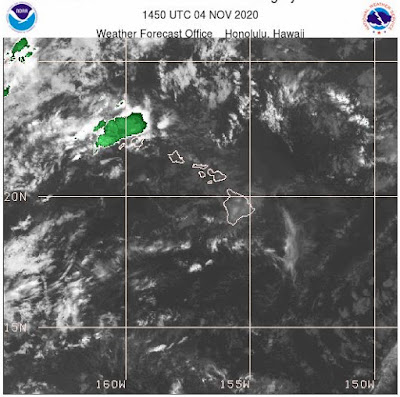