the road between heaven and hell

That's what Kalakaua Avenue is.

On one side, the most perfect example of how our species has deviated from its natural path. An astounding Babilonia of make-up, nail polish, high heels, trendy boutiques, electronics, artificial foods, colors, smells. Everything on this side is about look and money and is man made. Even the occasional bird doesn't look too natural when hopping on concrete.

On the other side, the most perfect example of gorgeous untouched nature. Waikiki and its beautiful, gently rolling waves.

Like a small magnet between different polarity magnetic fields, my spirit is repelled by one side and attracted by the other.
Ironically, my favorite way of immersing myself into the nature is by the means of a very artificial man built object. That's why, maybe, this time I bought one that looks pretty and has the green color in it... 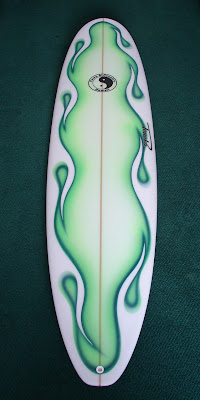 Well, not really... they had two 7.6, but the one with the airbrush had Future fins, so I dropped the extra cash for the sake of testing (at the shop, we have plenty of those fins to demo...).

7.6x21 1/2x2 3/4... a bit on the thick side for my taste.
I know that the glide offered by long water lines can't be replaced by thickness, but I wanted something that would get in almost as early as a longboard yet a lot looser... we'll see how that goes. Right now I'm waiting for the right tide and time (working people, go to work!) and then... Publics, here I come.
Later.
Posted by cammar at Tuesday, July 13, 2010

I think the correct spelling of that is

Yes, not much fun on Publics' rocks!

I'm going to be all girlie and say I love the art on that board and I'd buy it just for the paintwork!