I'm gonna start the report n.2 with one more photo of the big swell of last week. It was taken from the Jimbaran beach and I needed to max out the zoom of my camera to find out that there were some ridable waves over to the edge cliffs of the bay.
There's actually a guy crouching down in the barrel of that wave and the sequence shows he's gonna come out of it. 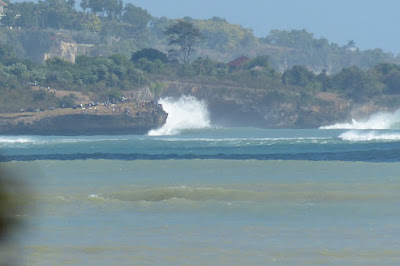 This was the second day of the big swell (Sunday) and I went to check that place out. The waves looked amazing with a take off close to the rocks that reminded me a lot of China Walls in Oahu, but since it was one of the very few manageable sized spots on the whole Bukit, it was very crowded.
So I went further to check Dreamland, which wasn't good. From there Impossibles looked unreal, but at least three to four times overhead. After having watched a couple of successful rides from the distance, I saw a guy getting caught behind a huge wall of white water and I decided I didn't want to have anything to do with that kind of situations and drove back to Jimbaran where I enjoyed surfing the mellow shore break again.


Fed up with the big unsurfable waves (I'm sure there were some surfable ones on the Sanur side, but only in the early morning before the trades picked up around 9 and only rights), on Monday I drove to Medewi, where I've been wanting to go since a long time.
Finding a cheap room was as easy as it gets and the locals confirmed me what I rightly guessed: it had been too big during the weekend over there too.
I did a quick sunset session together with a British guy that I met there, but the conditions were pretty horrible: still too big and too bumpy. Medewi is a morning only wave in the dry seasons, since the trades ruin it later in the day. But even more than the wind, what counts is the tide: it pretty much only works at high tide and I made sure that's what was going to be in the next couple of mornings.

Below is a photo that shows the setup: it's a point break, not a reef break. As such, it's more mellow and you have to cutback a lot to go back to some steepness.
But at the right swell size and right tide, it can offer some really fun walls to work with and can get quite long. They say the longest left in Bali.

At the end of the post you'll find to video clips: a wave in Medewi and one in Uluwatu. You can see how the difference in speed is quite evident. 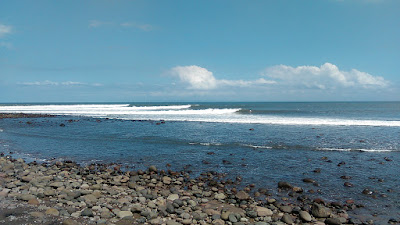 Medewi is a fishermen village. Here's part of the local fleet. 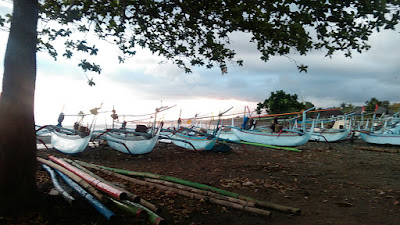 Launching through the low tide at sunset. Tricky, but those guys knew how to. 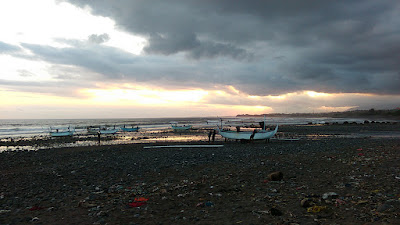 This snapper was caught the same day and it was cooked on a low coconut wood fire grill. Absolutely delicious. $3.7 with vegetables side dish. 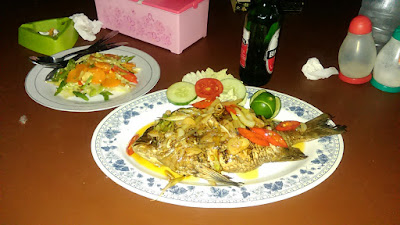 After two nights (and two morning sessions) in Medewi, the waves were getting considerably smaller, so I returned to the Canggu home where I'm staying.
The rice fields looked particularly beautiful in this gorgeous morning. Unfortunately, that guy in the middle is spraying them with some chemicals. 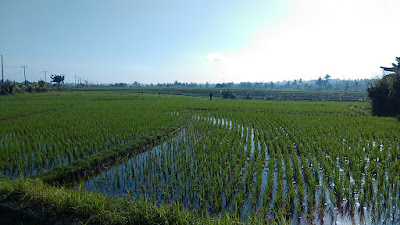 This other flower patch offers a view of the two Bali volcanoes on the background. 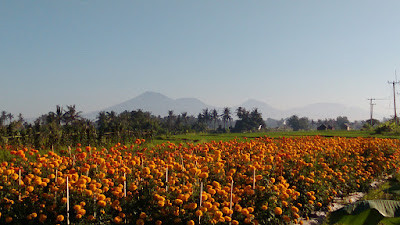 The local Canggu breaks were a bit too small/weak for my tastes (geez, I'm hard to please!) and it was low tide in the afternoon which is what my favorite peak in Uluwatu likes, so I started driving over there for the last couple of days. From Canggu it takes a minimum of 1 hour each way and the traffic and overall road conditions are pretty bad.

This particular day, there was a jam so bad that not even the bikes could squeeze through and I started mentally bitching about it.
Then I got to the bottleneck where I observed the road workers carrying on their shoulder with their bare hands some pretty heavy rocks all sweat under the ferocious sun.
I immediately stopped the internal complains as respect to them. We always forget to put things in perspective, don't we. 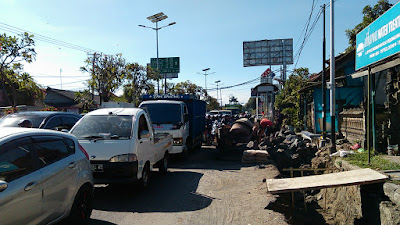 And that's what I was doing an hour after that. 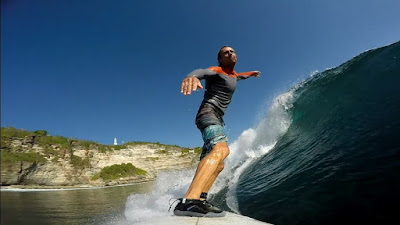 I'm too honest to claim a drop wallet turn and I'm gonna admit instead that I was totally losing my balance there. Managed not to fall though. 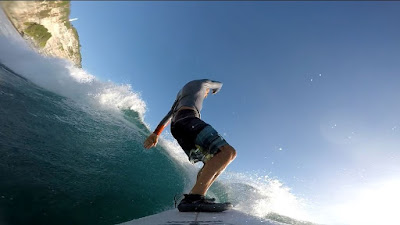 Wrinkled kick out by the rocks face. Inside looked pretty shallow. 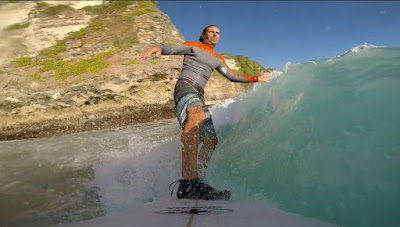 Love these kind of shots. 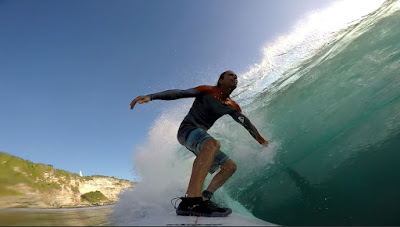 These gopro shots are taken from video clips that are really good for analyzing your mistakes and try to improve. I noticed my front arm is always dead along the body in the top turns and here I'm doing an effort to involve it in the upper body rotation. 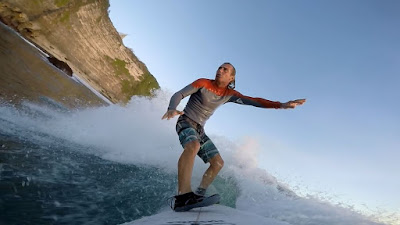 I'm now about to go to Uluwatu again and sleep there for a couple of nights, since there will be low tide conditions both at sunrise and sunset. Forecast calls for slightly bigger waves, which I'm not necessarily happy about (last couple of days it was perfect solid head high, my favorite size)﻿, but hopefully I'll be able to enjoy anyway. For sure I'll love the lack of driving.

Then on Monday I have to be back and take some photos at the immigration office for the extension of the visa (they changed the rules and now you can't commission everything to a document agency and forget about it anymore, but you have to physically be there at least once for the photos) and after that I should finally be able to get on a plane on Tuesday and go to my favorite island and enjoy a regime made of: surfing, eating, reading and sleeping.

The forecast doesn't look epic, but it doesn't look too bad either. Below are some weather maps I snapped on the 3rd and they all show some fetches (which I circled). The first one is pretty intense and the related swell on Friday the 6th is called at 6f 16s from Surfline. That's DOH at least, but that is not hard core wave, so I should be able to enjoy it anyway. 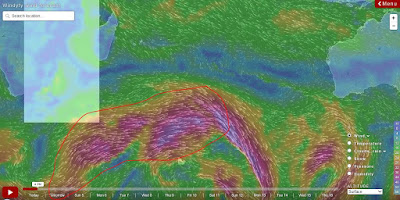 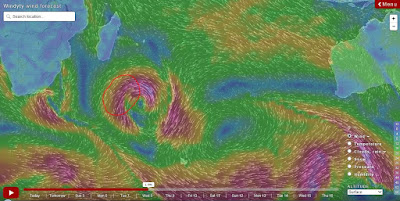 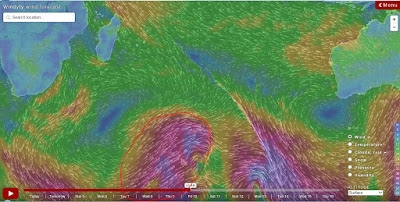 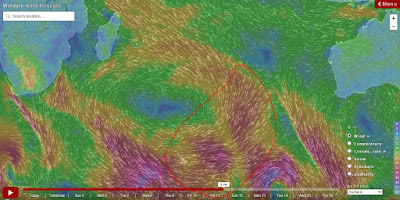 This last one is the worse one since it doesn't show any fetches at all, but it can always change and even if it doesn't, I probably won't mind a few days of rest. 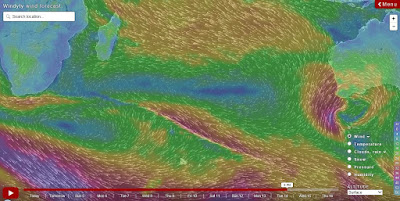 As promised, here's a couple of clips from Medewi and Uluwatu.
If you're wondering how many wetsuits I took with me, here's a little anectode.
As a imbecil, I managed to lose my favorite top. So I bought a new one which I took to Medewi only to find out that a couple of seams were sitting right under my ribs and bothering me when paddling.
I don't know how, but after a total of three sessions I managed to exchange it for another one.
Things that not even in the States you can do....
Ok, time for me to hit the road for the Uluwatu weekend. Aloha.

Aloha Giampalo!!
Hope you are enjoying your extended indo trip!
We are about due for an update!

This message is just a heads up and a call for some facebook HELP..
I am not a facebook user, but from what I have heard, some guy Jason Hall?, has also started a Maui Surf Report, with video, on facebook. Sure, I know you say whatever... he is basically doing what you do, via your blog when you are here, but with video...
sure, yeah, whatever…

Here's the part that some of the surfing community is having an issue with… he is venturing away from Hookipa with his reports and actually calling out some of Maui's "other" surf spots in his reports.? NO….? Yes!! he is…

I would say that most people that shoot photos or do surf reports know that it is probably ok to say you took photos or surfed some spot on the "westside" or "northshore" but you DO NOT CALL OUT THE ACTUAL SURF SPOT!! Right? I know you never do and I know the local photographers would not do that.

Hoping maybe you can pass the word and help him edit his surf reports to be a bit more ambiguous in his reference to actual surf spots?

Mahalo and see you soon I would guess!