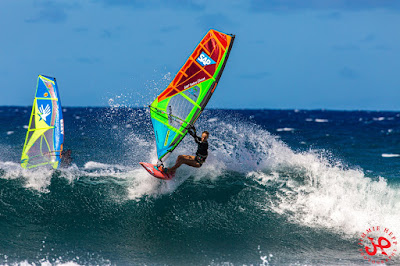 I chose a SUP foiling and yet another wave windfoiling session instead. That's because I got the date of the surgery to the trigger fingers (I'm gonna do two of them): November 21st, and I already feel more freedom of choice, since now I'm less worried of choosing gripping activities, as I don't care as much if it gets worse.

These are a couple of wingers with two different wings. The debate on the best style is still out there. That's what I can say so far after only four sessions (but also after speaking with a bunch of wingers): there is no question that a boom feels better than the handles (to the point that the guy on the left custom added a half windsurfing boom to his wing), as you can just slide your hands if you need to adjust their position, but it adds weight and it tends to swing more when you park the wing on your hip while riding a wave. Same goes for the windows: they're nice to have, but they add weight. The yellow one is an Ozone Wasp, we have them for sale at Hi-Tech. 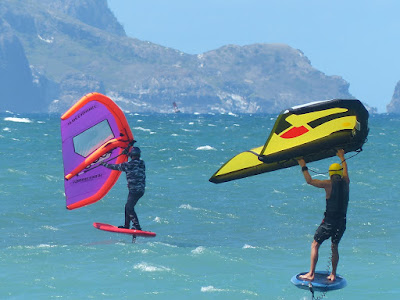 Small 13 and 16s energies at the buoys, the waves will be consequently small, but they might be the best choice, seen the lack of ground swells on the north shore. Check the Lahaina webcam before going.

Let's have a look at Pat Caldwell's description of last week's fetches:
Gales aimed towards the Americas as a low moved east from New Zealand 10/2-4. Angular spreading is bringing in small surf locally 10/9. This event should hold about the same into Friday as it begins to fade.
A severe gale grew seas over 30 feet to the SE of New Zealand 10/5-6. It tracked steadily east along 60S. The highest seas were aimed at the Americas, though the size of the fetch was large. This gives better odds for angular spreading.
The onset stage is due locally Saturday with inconsistent, long- period sets from 180-200 degrees. It should peak on Sunday 10/13 near the seasonal average. Heights should drop a notch on Monday from the same direction.

Below are the maps of October 2 to 6, which might help following that description.

The northerly energy is completely gone, today we're left with the windswell which should still provide some breaking waves at Hookipa and on eastern exposures.

South Pacific has a very small fetch in the Tasman Sea. 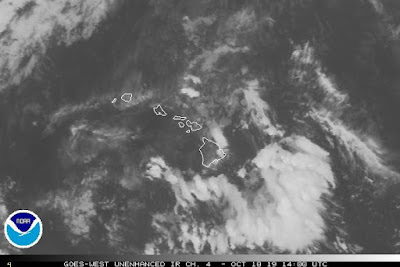