Things you can do with a wing: cruise one hand cool as cat... 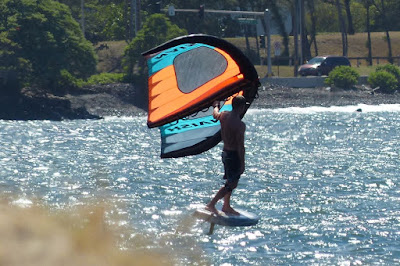 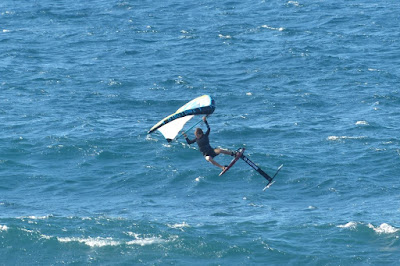 ...carve on a wave. Speed runs and downwinders are other applications of a sport that is revealing to be a very multifaceted one thanks to the efficiency of the foils. 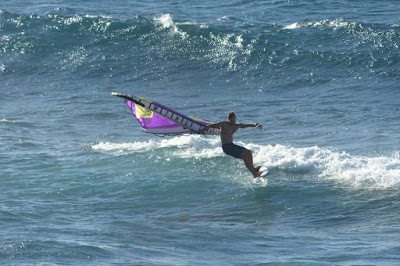 1.3ft @ 15s from 187° (S)
1.2ft @ 12s from 192° (SSW)
Small 12s and 15s southerly energy at the buoy will make for inconsistent but occasionally decent breakers on the south shore, like the one in the 5:31am picture below. Check the Lahaina webcam if interested, for size, conditions and consistency. 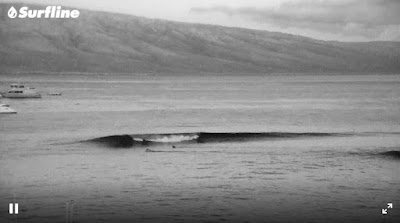 4.2ft @ 8s from 61° (ENE)
1ft @ 11s from 342° (NNW)
Three things worth noting:
1) that sliver of 11s NW energy comes from a fetch in the NW corner that happened about a week ago. It took so long to get here because the fetch was small/weak and the waves generated only had a relatively short period, hence travelled slowly. I would not expect that energy to be visible at all times, but there might be a very small set here and there. Below is the collage of the maps of July 24 through 26.

2) yesterday the waves at Hookipa were surprisingly up to head high. Well, surprisingly for me at least, because I overlooked the 5.2ft 8s from 53 reading in yesterday's call and the fetch that generated it. Below is the collage of the maps of July 27 through 30. I put a red arrow on the post Douglas fetch which had a good direction and decent length. Today that energy is down to 4.2ft 8s, but still from an unblocked direction, so there might still be chest high waves at Hookipa, possibly bigger on eastern exposures. This energy is on its way down, as the fetch got shorter and shorter afterwards.

3) in the last couple of days there was a low in the Gulf of Alaska (black arrow) which generated some small NNE energy that is on its way. Pat Caldwell calls for 1ft 13s on late Saturday, 2ft 11s on Sunday and 2ft 9s on Monday. Nothing major, but it might actually end up being a bit bigger than that. Hookipa loves that direction.