Best wingfoiling freestyle video I've seen so far. Those guys are moving fast. I expect the foil industry to come up with wingfoiling dedicated profiles anytime soon. For example, Gofoil has just announce the NL (Next Level) line.

The Tasman Sea energy didn't make for many breakers in the past couple of days and it's now down to 11-12s. Pat Caldwell also noticed:
Gales nosed into the subtropics of the Tasman Sea 7/20-21 and was expected to become the dominant background swell locally 7/28-29 from 208-220 degrees. But it never grew beyond tiny. The PacIOOS/CDIP southern buoys did slow a slither of this energy, though not enough to manifest into breakers beyond tiny.

Today the buoys are feeling the new 16s energy from the fetch when it moved east of New Zealand (collage of the fetch maps posted a couple of days ago) and in fact there's inconsistent but nice waves once in a long while. Tomorrow should be better.  Check the Lahaina webcam if interested, for size, conditions and consistency. 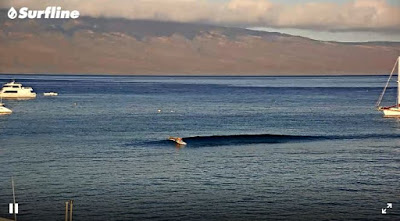