Here's another sequence from that magic day 3 at Cloudbreak.

I remember this one very well, since it was a solid double overhead one. 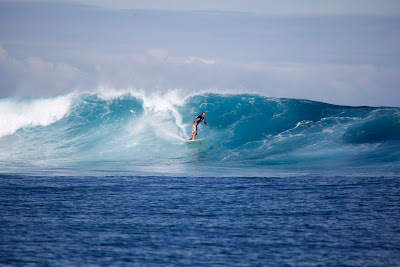 Not Slater, but not a bad stance either. 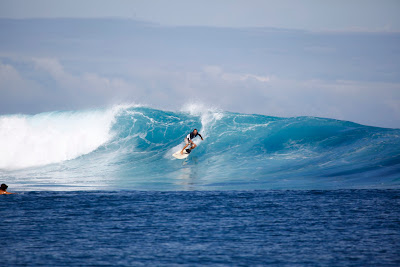 I like this one too: the board is still on the rail. 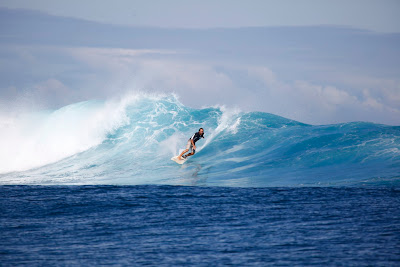 This one sucks instead. Yeah, I threw a little bit of spray, but the arms position is lame. 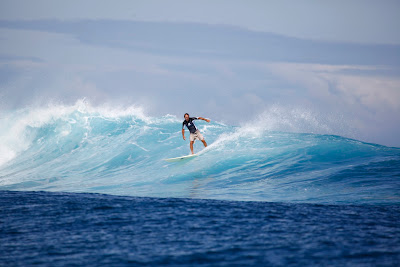 Oh well, at least I didn't fall!
I believe this is the one that I rode all the way to the reef (and got stuck there in very shallow water for a while). 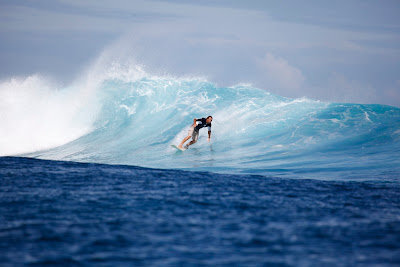 Not much to report from Maui.
After that brief NW swell, the north shore now looks like Porto Pollo (the Italians would know) but the south shore has been fun.
In particular, yesterday I surfed the same waves that hit Cloudbreak on that huge day 6. They did lose quite a bit of energy (shoulder high in the sets), I have to say...
But on the other hand, it's amazing how long they can travel! I feel like thanking mother nature for this wonder called waves. I just can't get enough of them...

Ok, let me add one more that I stole from Michelle's album.
As far as wave shapes, can't get better than this! Looks like the reef used a ruler to decide where to grow...
Meesh, thanks again for inviting me and allowing me to experience this! 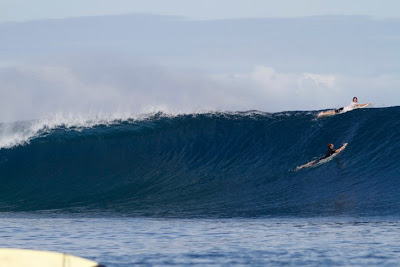 Email ThisBlogThis!Share to TwitterShare to FacebookShare to Pinterest
Labels: namotu

Don't be too hard on yourself, I mean a picture taken at 1/2000 or probably higher does not make justice for the rider sometime. Sometime you win, sometime you loose. However, honestly I thought you would have to surf naked after the scratch I saw the first day on your boardshort, so two thumbs up!!! ;-)

Amazing shots sounds like you scored some good southern groundswell courtesy of New Zealand. Surfing aside, I would be really interested in your appraisal of Namotu as a wave sailing destination.

NR, if you mean than maybe 1/2000 later my arms would have been in a perfect position, I didn't think about that... and I like your approach!
I do know that I have to work on my arms though, and looking at the pictures helps. A video would help even more... unless I would get so depressed watching me that I would decide to quit! :)
Oh, board shorts were like new, after a little sawing action...

James, that is a really good question.
Unfortunately, I don't have the answer, because when I was there the wind was doing weird things. The last day, it blew from the "regular" trade wind direction and, as I wrote, I caught two waves at the Lefts. Way too big and sketchy to understand if it's a great spot or not. I think it is.
Actually, I know it is...
Remember that contest they ran in Namotu? Here it is, the Fiji Wave Classic
http://www.youtube.com/watch?v=CpOnJulkn74
That Stone's aerial at the end is in the history of windsurfing...
But!
- I have no idea of how often and how strong it blows, but this can be googled. It's popular with kiters, so I'm assuming it's kind of light.
- It's a radical spot. You fuck up, the gear is on the reef.