Thanks to blog reader Jaecey for his donation.

Congratulations to Carissa Moore for her fourth world title and to Maui's Dakine Marketing Director Micah Nickens who she hired as a local coach. He's a photo he posted with the caption:
That time I told Carissa the coast was clear to jump off the rocks. I was horribly wrong. We both went into a’ama crab mode.
I saw that in the live streaming and couldn't help but chuckle... 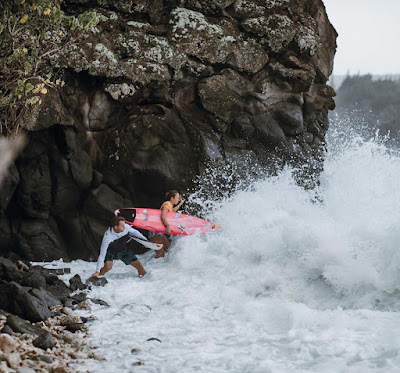 A bit of action from the harbor Jetty that was still pumping (although not out of control like the day before). This is Ridge Lenny who took off on the wave on the back and on the outside peak, probably a good 20-30 yards out. By the time the wave gets to the inside peak, a massive step forms in front of the surfer and sometimes (like in this case), he manages to do connect and do a second drop into the barreling section. The whole thing is extremely difficult to do. 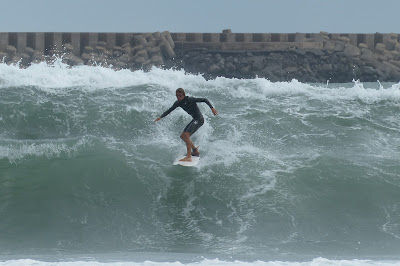 In this case, Ridge did successfully drop in front of the step, but he was too deep for the barrel and he could only observe the combined heavy waterfall behind him. 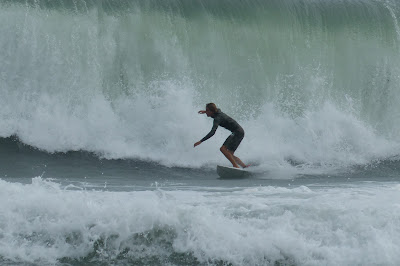 Seen the amount of water moving, Austin Kalama chose to shortboard surf (instead of foiling) and here he's setting up for the barrel. His dad Dave chose to longboard instead. Yep, he can still surf. 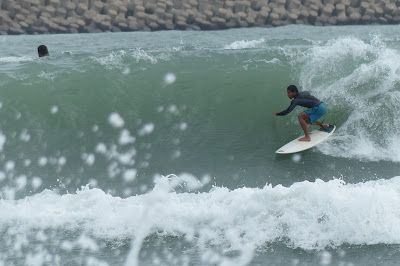 With the N wrap declining in size, today the local buoys show some small southerly energy. By looking at the Lahaina webcam, you can see fun size waves like this one below. I believe there is a mix of declining leftover N wrap and small S. Check it out yourself if interested. 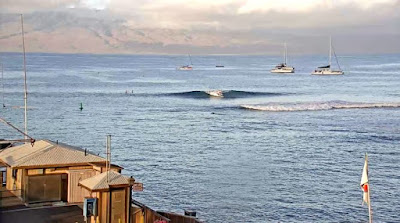 5.3ft @ 9s from 17° (NNE)
2ft @ 5s from 62° (ENE)
Third day of the big N swell now down to 6ft 13s from 14 at Pauwela. Notice the other smaller period energies which might still give the waves a character of storminess, but the overall reduced size should make them much cleaner than the past couple of days. Hookipa should be surfable, although still at least head and a half to double. I would recommend to still look for something a bit more protected.

North Pacific has a new high that will take over its center. On its eastern flank, some medium strenght winds form a small direct aim fetch and a bigger one with possible angular spreading.

South Pacific looks summery with two strong lows out of which I circled the fetches that are oriented towards us. 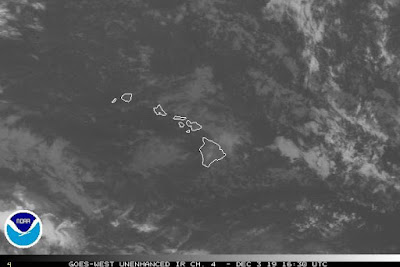