And the day after that too!
The title says it all, but let's add some proof of it. Ok, this is the tuesday report.

In the morning I surfed knee high waves at Puamana, standing up on the 12.6.
I was fooling around with my little water camera. I put it on the ankle first, then I strapped a tie down strap to the front of the board and hooked it there, so that I could shoot myself when riding a wave. Paddling for it, mostly.
That's what I mean. 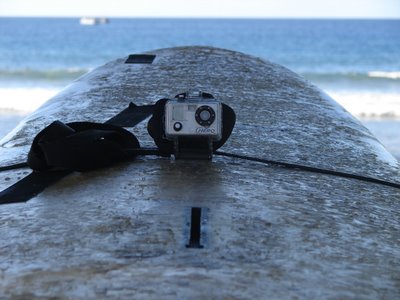 Now, imagine this.
I'm standing up with the board parallel to the waves, so that I only have to turn it 90 degrees when the wave comes. I see what I think it's gonna be a good wave, I kneel down on the board and turn the camera on, click a button three times to set it on the videos, push the shutter, stand up, turn the board towards the shore and paddle like crazy to catch the wave... it's a bit tricky.
But, as Robby Seiberner said, don't let anybody tell you that you can't do it!
So much fun!
The strap is not a good idea because it slows down the board a lot. I think it's because even though it's pretty tight, it still flips down when the board moves forward and catches a lot of water. Glenn suggested me to use duct tape instead, and I think it's a good idea. Packaging tape might be even better.

Anyway, when I drove back to Hookipa, I was delighted to see some super clean head to overhead high waves with just a few windsurfers out... did I say that already lately? Actually, today the windsurfers out were none.
I rigged my 5.5 and put the helmet with the PVC pipe derived camera mount on my head and hit the water around noon. Yoshi followed me shortly and it was a great pleasure to share the waves with him... he's such a smiler! And a good sailor too! Today he was ripping. I took more photos and videos.

I put all the little videos together (not all of them were great, but it's sunny from the start to the end...). As usual, I searched all the songs with the length of the movie and I chose a song of Koala Beamer with very significant lyrics. I found out afterward that the name of the song is Home.
Just in case somebody was still wandering... Maui is my home now.
Tomorrow... who knows. The world is so big!
Here's the movie.
Photo Sharing - Upload Video - Video Sharing - Share Photos

As usual, if you can't see it try here.

Here are the photos.

Here's a close up of a very fun little toy. You can buy it online at: http://www.goprocamera.com/ 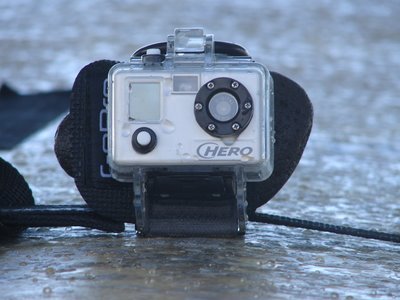 How does this karma thing work?

While sailing at Hookipa in the afternoon I saw little Bernd's board headed towards the rocks and he swimming after it. Of course I stopped and I grabbed mine and his board to keep them away from the rocks. I succeeded with his board, but not with mine. 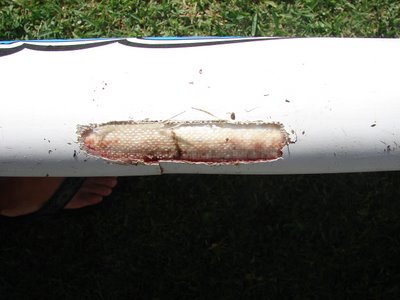 Well, not too bad, I can easily fix that. The thing is that I'll have to wait at least a week or two for the board to dry out... no problem, I got plenty more. Plus, the wind is going to be light in the next few days and it's gonna be longboard paradise.
Hey Norm, don't worry about it! As I said, it's an easy fix. And don't yell at Bernd either!! He did what he was supposed to do. He saw a wave way bigger than him and went for the lip... you should be proud of him! I'm sure you are...

If you guys got time for a few more pics, here's another guy that went for the lip. 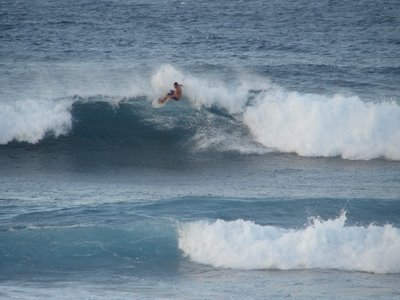 And here's what's called a roundhouse cutback. It's a move I love to do sometimes, though I don't do it often due to incapacity. 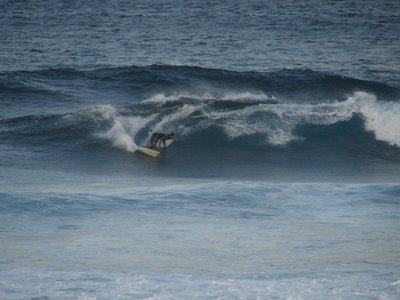 And last but not least, here's the weather map of tonight, tuesday 19. 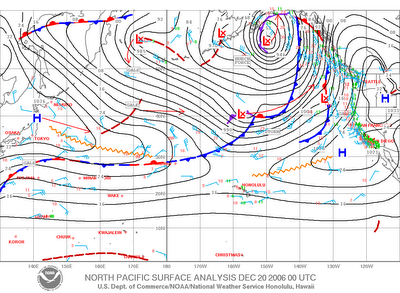 You know what it says? It says that some serious seas headed towards Hawaii are being built as I type and will be here around Saturday. Plenty waves even before that, but the weekend should be particularly intense. Yet another big swell. Yet another episode of this incredible winter in Maui. Without any doubt, so far the best winter of my life.

And since I didn't post this tuesday night and I'm back on it now, on wednesday night, let me add my little daily report.
As forecasted, the wind was lighter than yesterday. I sailed one hour on the big blue 9.6 and I had forgotten how much fun that board can be. Only riding the lefts upwind, though. So that once done with the ride, I'm in the upwind channel, tack, sail out a bit, jibe and catch another one. It's the Kanaha Marry-go-around! My favorite in the world.
Plus, when I jump on the backside of the sail, I can even kind of turn it and if I keep the sail neutral enough it's like surfing frontside on my normal goofy stance... an extremely fun thing to do.
I don't like to go right downwind on that board, because then sailing back upwind is painfully slow.

Taking advantage of a further drop in the wind speed, I switched to my 12.6. The wind kept going up and down. Wind down, I go left, wind up I go right. No wind at all, I take the paddle. It's like playing roulette and always winning.
The waves increased and a few glassy logo high sets came thru. About four windsurfers and a couple of kitesurfers where out with me to share the stoke.
I'm tempted to describe my best wave, but it would be too difficult. I really need one of those Strange Days disk recorders...

Anyone wants to send me one for Christmas?

Yet another great post, Giampaolo! Very trippy video, and thanks for that windsurfing smile shot--I guess you are having a good time after all!

When I get there in Feb. we'll have to set you up with 3 cameras. One with the POV from the beach, shooting you or me or someone else sailing, my helmetcam, and your minicam mounted strategically on the rig or board somewhere. Editing will be a bitch but if we get it right, it will be sweet! Think of the possibilities!

Cool, shame about your board and at least it got damaged with you carrying out the aloha spirit! Little Bernd is going to be a biggie some day, this kid is really something else.

Last night Jeff posted that he might come to the Netherlands for this 'Superfreak Fest' we are planning to hold around March/April that would be something. Hopefully the S.O.S. longboards wil have arrived by then, maybe he can show us what it's all about and share the stoke.

Yo Ely,
everything sounds extremely interesting, but here's my personal reuirements for such a thing like that. It got to be ready in 5 minutes. That's the water time I am willing to sacrifice. And that's why I like the GoPro camera. There's nothing to set up, no connections to do, no backpacks. Just put it on your wrist or wherever and go.

Robin, little Bernd is very likely going to be a biggie some day... that's why I'm nice to him! I hope he will remember that when I'll be downwind of him on a wave... :-)
Just kidding, of course.
I don't think he'll be able to show you much on a 12 footer... too big for him! But his dad will!

I believe the sunny posts will keep coming. We have a long period of big waves in front of us.

Aloha Giampaolo...I have seen that camera at Lightning Bolt surf shop in Kahului...same price with no shipping costs...

Hawaiian Islands has it too.
But not all readers of this blog are in Maui...

B.t.w. read back it is Jeff H. that might be coming to Holland (so no Bernd nor his father).

That is such a great little movie-can I borrow the camera for the next time I take a bath?

Robin, in this case, you'll have the best person on this planet to show you how to sail on those boards...
At least at the moment. Gimme a few more years... :-)

Sharon, sure you can borrow my camera while you bath, but only if you let me post what you are going to shoot!

The best feature of your little GoPro camera is it's spontaneity! The ability to be able to use it at a moment's notice is great, but I don't see it as a primary camera for use in an edited video. It's a great supplementary point of view camera, but the shots are really not that reliable and useable. At the very least, I can meet you down at the beach all "loaded for bear", rigged and ready. Then you can have your 5 minutes of fame and we can have something nice to edit!