There we go, the Hookipa show is on again! Part 3

Another grand day at Hookipa. Let's start with Robby, 'cause Robby is always Robby. 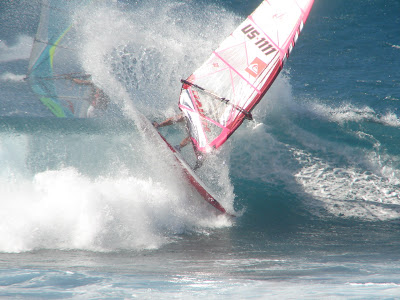 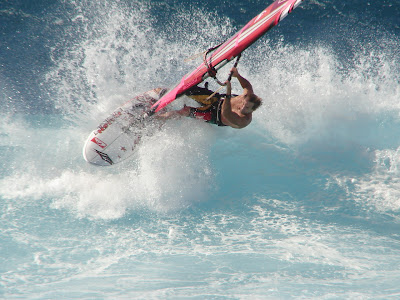 The waves were a bit smaller, the crowd was overwhelming (almost 40 sailors in the water from 2 to 3pm), the wind was cranking, the chop was pretty annoying. Not my kind of conditions, I waited until 5 and scored a short but sweet session on waves that got glassier and glassier. Unfortunately at Hookipa you can't sail till dark because at one point the surfers will go out (no complaints, they have their right to enjoy the waves too!). That's why I love winter time when it's big enough for Kanaha...
Anyway, Nico didn't seem to mind the conditions instead. 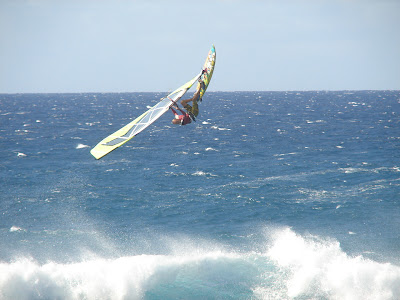 This is Andres, who broke the tip of his mast. The Hot Sails Maui are the only sails I'm aware of, that have an almost undestructable webbing on the mast sleeve that will prevent the sail from tearing off when the mast breaks. Andres kept sailing for 30 minutes like that, getting worked pretty bad in a couple of waves and the sail was still absolutely intact when he got out of the water.
"I wanted to see if I could break that thing, but I just couldn't!" 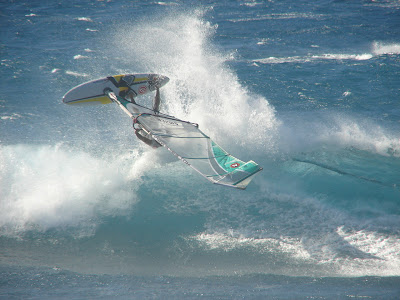 Stratosferic backloops are not uncommon at Hookipa, but super high forwards are more rare. Philippe was in a jumping mood. 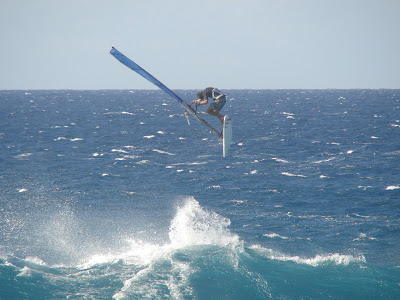 Seen the fins? Here, have a better look. 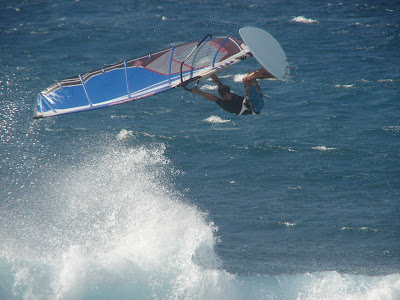 If I'm going to get a custom, there's no doubt that I'll get it with 5 fin boxes and spend the rest of my life trying all the possible fin configurations trying to figure things out. In the meantime, I'm looking forward to try some quads when I came back from Italy...

What's today? Monday. It's going to be epic, the best day of the swell, for sure. The Waimea buoy went up to almost 6 feet, 14 seconds from 345. With a 2+ feet high tide at 1.13pm, that means mast high at Hookipa. I may go take some photos before sailing my beloved sunset session somewhere else.
In the meantime, here's the slide show of ALL the other 81 photos I took yesterday. Sorry, no time to edit the caption. Take it as it is and be glad that there's someone that does this for you. Talking of which, Jeff got some shots too.

Did Kanaha have any waves? I had to leave last Thursday after 3 weeks, I'm not quite good enough to sail at Hookipa in those conditions.
" A man's got to know his limitations" I saw you one afternoon leaving Mana foods, but you were too fast for me to flag down and say Hi. Keep up the good work, love this site.