The not so subtle difference between CAN and HAVE TO.

I didn't take any photos yesterday because I was busy testing a board, but fortunately Jimmie Hepp was on the rocks and did the job!
Here is his gallery of the day on Facebook... he's got quite a few nice ones. 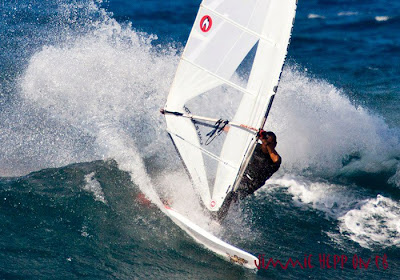 The board was a 2011 82l Starboard Quad IQ, and I could test it thanks to Josh Sampiero of Windsurfing magazine. By the way, Windsurfingmag.com is hosting photo galleries from Jimmie Hepp too. Check this one out for example. 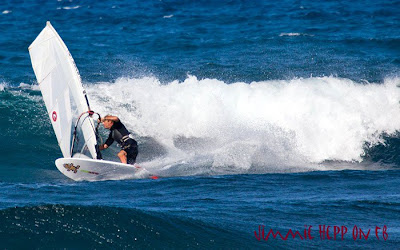 This post is my very personal short review of one board. Nothing to do with the magazine extensive test. They had a bunch of sailors of various skills and weights that tested the hell out of all the major brands 2011 wave boards.
They do tests in a very professional way and I would definitely recommend to get a copy of the mag when it comes out (should be in February) if you're interested in buying yourself a new board.
The test lasts several days and all the testers get to ride the boards multiple times in different conditions. At the end of the period, each tester knows very well each single board and has a clear opinion of its pros and cons.
I was one of the testers one year and let me tell you... it's a lot of work! 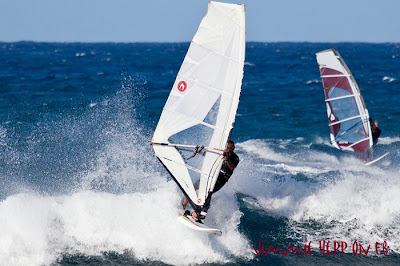 The coolest thing about the new Starboard IQ Quads is that they come with 6 fins. You can choose to sail it as a quad (and you can choose to put the big ones front or back) or as a twin.
I started my test with four fins with the bigger ones in the back.
Like ALL other quads I tried so far, I immediately had the feeling of too much grip/drag. Extreme control too of course, but maybe a bit too much.
With a quad, you CAN push your top turn as hard as you can and generate buckets of spray and that's a cool thing. But sometimes you HAVE TO push your turns a bit harder just in order to achieve them!
In other words, the total amount of fin area felt a bit too big. Don't forget that I'm so lucky to sail near perfect sideoff (that's how it was yesterday) conditions.
In sideon conditions with currents and chop, that extra grip might well be a blessing.

It's also highly possible that, as someone suggested, I don't know how to ride quads yet (I don't own one!).

Or, and that's what I actually believe, I just like twin fins better. We're all different and have different preferences. Even though about 80% of the sailors at Hookipa now ride quads (Levi and Keith leading the pack), there's still sailors like Mark Angulo and Boujmaa that seem to prefer twins, so I'm in good company... 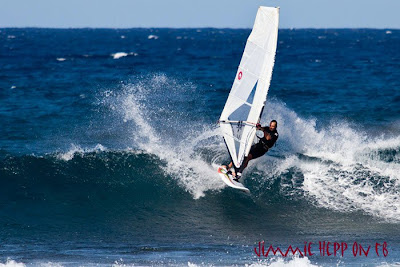 Said this, let's see how I liked the board with a twin fin setup. Well, I liked it a lot!
I own a 2009 Starboard Evil Twin 80l and overall the two boards a quite similar. The Evil Twin is lighter (no extra fin boxes and it's carbon construction while the 82 was a wood construction) and that is a great advantage when it comes to getting on a plane (I mean planing, not traveling!).
But on the waves the 2011 82 turns both smoother and sharper. I had the felling I was using the whole rail and the photos that Jimmie took seem to confirm that.
In the bottom turn I could carry a lot of speed and that automatically translates into sprayful top turns.
This is the photo from which the close up at the top was taken. Check that out... I don't usually do throw that much spray! 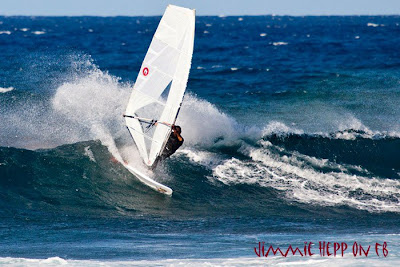 The only con I can mention, is that the deck felt a bit slippery.

Oh, I did try the quad setup with the big fins in the front and that just didn't work for me at Hookipa.
Soon I should receive a 74 IQ Quad and with it I'll keep testing the optimum fin setup. I'm actually thinking about an asymmetrical setup...

In the end, even though I'm quite happy with the Evil Twin 80 (it has been a great all around board for me), if I had the opportunity I would definitely swap it for the 82 IQ Quad. In other words, my ET 80 is for sale (just like my ET 70) and if someone is interested, the email is on the right.

Lastly, here's a couple of shots that document a "kiss to the rocks" action.
I went down on a small insider and ended up on top of my sail, carried by a foot of white water for at least 20 yards right inside the rocks area. 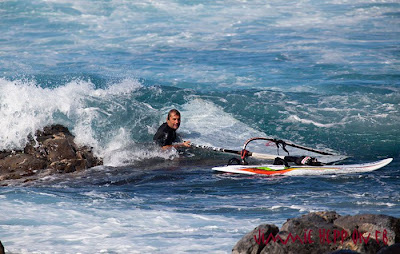 Fortunately, I was able to squeeze between two of them and catch the rip current and swim out of it... I hate going on the rocks with a board that's not mine!!! 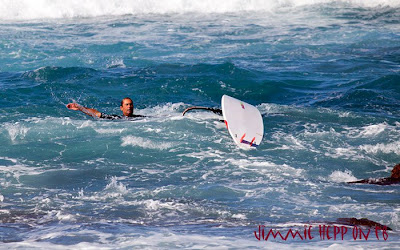 Allright, that's all for today. Surfing at 7am this morning was fun (uncrowded and glassy). Now I just finished watching Napoli beat Palermo with a goal at the very last minute on FSC+, I'll take a mini nap and go to work (afternoon shift for me today). Not a bad start of the day...

That also mean that I will post the photo contest winner tomorrow.

Last but not least, I'd like to thank all blog readers. November was a great month with a total of 31,486 unique visitors.
That's more than a thousand a day and I'm very happy about it. THANKS!
Below is the day by day detail.

I bet who ever won the contest sent in a photo of you (darn why didn't I think of that?!!

Nobody was that smart!

GP - nice carving man. You sailed very well with that board when I was watching and the pics confirm what I saw. Hope you had some great surfing today! More to come.