Couple of sessions for me yesterday. I particularly enjoyed the sunset one when the Kona got lighter and the quality of the waves went through the sky. Hookipa was a 9 also thanks to the consistent mix of swells and periods together with the occasional long lines of the new swell's forerunners.

I don't have a shot of the day, so here's Will Hunt on a gem at Honolua (I think) some days ago. 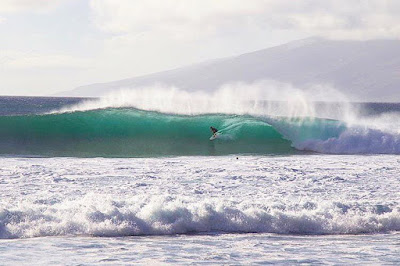 4am significant buoy readings
South shore is blown out by the Kona wind. You don't even have to check the webcams for that. Unless you want to go windsurfing in Kihei, of course.

The buoys came up nicely, below is the graph of the three reported ones and my guess of how the Pauwela graph will be today. Notice the original 291 direction at the NW101 buoy. That means that the swell will have to heavily refract around the upstream islands to get to our north shore. But with Pauwela sensing 4.6f 17s at 4am and still trending up, I would not be worried about lack of size.
The problem, as we will see below, is going to be the strong Kona wind.

Current wind map shows:
1) a strong and long WNW fetch. This fetch is going to generate the next swell which is predicted by Surfline to quickly rise all morning on Tuesday and reach around 13f 16s mid day.
2-3) it's nice to see some little fetches oriented towards us in the south Pacific after like a month of nothingness, but I'm afraid they won't do much for us anyway.

NAM3km map at 7am shows already strong Kona. Not planning on a dawn patrol session, but I might post a beach updated later in the morning. Not sure what happened to yesterday's update, I got the "post published" notification, but it wasn't there. For the records, I gave the early morning clean conditions an 8.

NAM3km map at 2pm shows even stronger wind and my experience is that when it's predicted to be strong it might be much stronger. For sure some very skilled windsurfers will tackle some possibly epic conditions at Lanes. Which made me think to check the clouds for my photographer friends.

But I don't have good news for them. Some unsettled weather is almost upon us, as this 5am satellite picture shows.

Plenty rain coming too. The radar image at 5.35am shows Oahu about to get slammed pretty heavily.

And Maui will too. According to the HRW model on Windguru, the rain will start around 3pm and last till the evening. I see some heavy numbers there, be ready for that flash flood warning alarm to go off on your phones quite a few times.

And don't go hiking, unless you want to end up like these guys.
Posted by cammar at Saturday, February 11, 2017