Many thanks to blog reader Geoff for his generous donation through the Paypal donate button. Very appreciated.

Yesterday I went to Honolua hoping to find waist to chest high waves for my customer. The tide was high and that wasn't happening. I'm pretty sure it happened later at low tide (first rideable wave was caught at 8.10am), but I had to work at Hi-Tech and we couldn't wait. So we drove back (no charge for the customer), but I randomly bought a board on the cliff!

In the afternoon I went windsurf foiling (session 3). A little bit better every time, but I'm still far from foiling in control. I need to do a session with Jeff Henderson and swap setups. But it might also be just a matter of practice.

At 6pm the light at Hookipa was horrible but I wanted to try my friend's Panasonic FZ300 and this is a shot from it. The FZ300 is 100 grams heavier than my FZ200 (because they made it water resistant), so I didn't even bother comparing anything else and bought a used FZ200 instead. You guys will have to live with a few days of blue shots until the new one arrives. 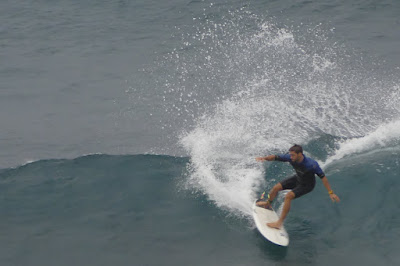 Legenda:
- P is the period
- S is the speed at which swells travel  in knots (nmph)
- T is the time to cover the 212 nm that separate the N buoy from Maui
- GP's is the approximation of that time to provide a rule of thumb that is easy to remember.

In this case it could be 10h at 13s and viceversa (with valid interpolation in between) and then you have to remember that 16s will take half of that numbers in hours (8). Most swells coming from the NE don't have elevated periods anyway.

Below is the graph of the N buoy, which shows that the 10s NE energy has been up to at least 5f for at least 18 hours (light blue line), so that energy should be here already. And it is.
One of the swells hitting Pauwela, in fact, reads 2.7ft @ 11s from 24. This swell started from a NNE direction (will turn more NE later) and it might have gained one second with the travel. It unfortunately seems to have lost a lot of size also, and that's because the shorter the period, the higher the decay in size with travel. That's a great thing, otherwise also distant generated swells will arrive with a lot of chop.

Anyway, today is going to be a small day for the Hookipa standards. Stay tuned for the beach report for size indications. Conditions should be very clean at dawn, since the iWindsurf sensor reads 4mph from the SE. 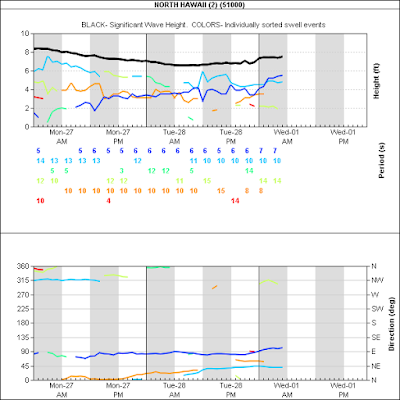 Interestingly, the HRW model on Windguru predicts wind from a tradish direction in the morning and a sharp switch to strong Kona at 2pm.

That is because we are in the middle of a mini cyclonic action with a center just south of Kauai at the moment (link n.6 if you want to see the animation of it). The change in the wind will happen whenever that center will move past us.

We got spared the heavy rain so far (even though my phone got a couple of flash floods warning yesterday), but there's still some around.

Current wind map shows:
1) tiny W fetch
2) small NW fetch
3) windswell fetch
This week is going to be a much below the average one. Next winter-kind swell will be Sunday with 6f 14 from 303 forecasted by Surfline at 2pm.

One last note. Remember that massive storm supposed to hit Nazare? Here's a clip of Francisco Porcella on a massive ugly looking bomb.
Posted by cammar at Wednesday, March 01, 2017