I feel like starting this last post of May with a photo (by Tomoko) of my coworker Ayako enjoying the awesome conditions we've been having. May has been nothing short that excellent. South shore has had very few days below average, north shore has had some waves too with easterly winds and overall a fantastic weather. 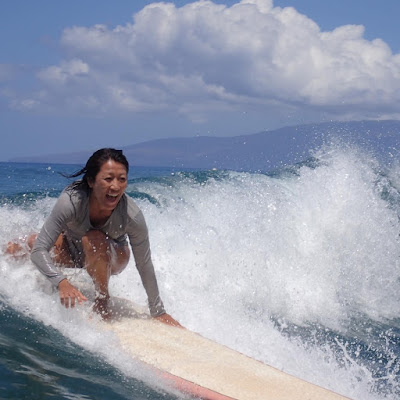 This is my pick of Jimmie Hepp's windsurfing photo gallery of the day at Hookipa. 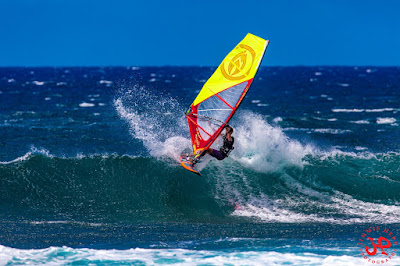 South swell continues its decline while another pulse is expected to start building tomorrow.
Let's have a look at the evolution of the fetches in the collage above that groups the maps of May 24, 25, 26, 27 and 28. As you can see (click on the map to make it larger), the first map shows the last fetch that produced the current waves (an angular spreading one, so expect the consistency to be pretty low). Then on the 25th there were no fetches at all and on the 26th a new S one formed and that's what made tomorrow's swell. The timing (if morning or afternoon) will be more clear once we check the buoys tomorrow morning. I got a feeling it might be late in the day, but we'll see.

In the meantime, this morning the Lahaina webcam is not working properly, showing an image every minute or so. Hard to tell, but it's definitely smaller than it's been, so we'll call it a transition day with waves mostly in the knee to waist high range with some possible occasional bigger sets. 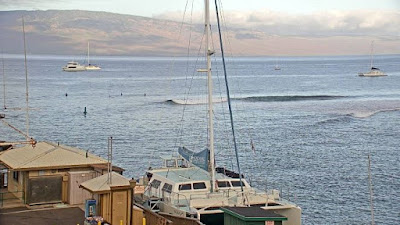 Well, as soon as I posted this, the webcam started to work properly and here's a killer harbor set. So check it out yourself, as there's still inconsistent sets here and there. 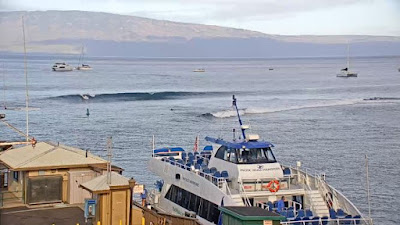 Only 2ft 10s from the NW at Hookipa plus a bit of windswell will only make for small waves at Hookipa, but not flat either. Probably waist to occasionally chest high.

North Pacific has a tiny and weak leftover NNW fetch way up there.

Is it then over for the north shore? Not even remotely so. Here's the map of June 6th showing another unseasonal low that is going to sit NNW of us and pretty close. That means: waves and trades from a direction between E and ESE. One week out, so things can change, but I don't think they will much.
That's a classic out of season swell that calls for a trip to Oahu to surf a pro-less north shore. Too bad I don't think I can do that. 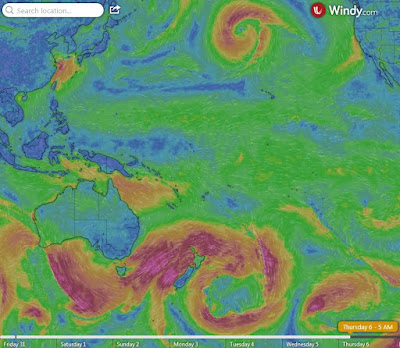 South Pacific has a strong fetch occupying the whole Tasman Sea and extending over to the S and SE of New Zealand. I circled in red the two fetches from which we will receive waves in a week and in black the part that will be completely blocked by New Zealand. Nothing to be too excited about... unless you're in Fiji! 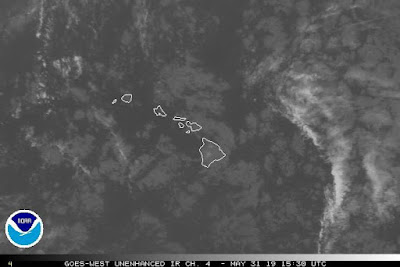