A day of rest for me yesterday. This is my pick of Jimmie Hepp's gallery of the windsurfing action at Hookipa. 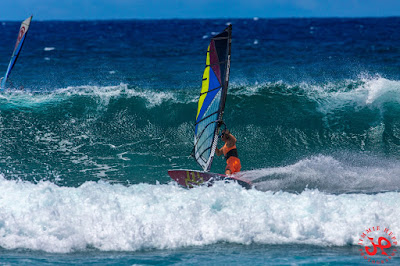 1ft @ 16s from 216° (SW)
The local buoys register some low 13s energy from the south together with some other low 16s from the SW. Yesterday I posted the fetch that generated the Tasman Sea SW swell, today I post this photo of Cloudbreak posted on April 28 by Brothers Surf Tour. The post Buoys to Maui travel times and Maui's shadow lines shows that at 18s a swell takes 4 days from there to here. 5 days at 15s. The amount of energy that makes it over here is always a hard guess, but I can assure it will be less than that... I might report early, but now there's the webcam in Lahaina and my beach reports are not so important anymore. Thank you Ozolio. 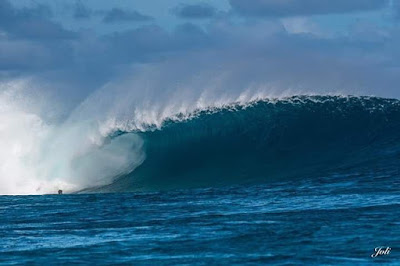 2.2ft @ 10s from 40° (NE)
1.5ft @ 6s from 359° (N)
1.3ft @ 16s from 321° (NW)
New NW swell is pretty low at Pauwela. Below is the collage of the first three reported buoys (Pauwela's is not showing) together with the Surline forecast. Notice how this last one only has the swell for tomorrow (orange line). It will slowly build today instead, but the rise at the upstream buoys (red circles) is not particularly impressive, so expect only little energy from it. It will be mostly the shorter period NE energy with some NW sets here and there. Should be bigger in the afternoon than in the morning. Weather at my house is rainy with some wind, I might drive south right away. Hookipa should be head high and low quality. 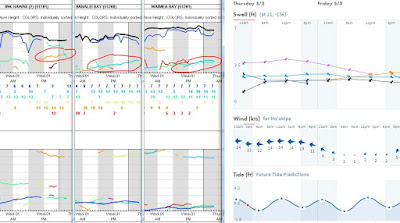 Wind map at noon in the Saildrone version. Looks cool, but offshores in Paia while 10 miles offshore is blowing 25 knots from the ENE don't make any sense. So, this is probably the last time I post it, just to quickly label it as "cute but often wrong". 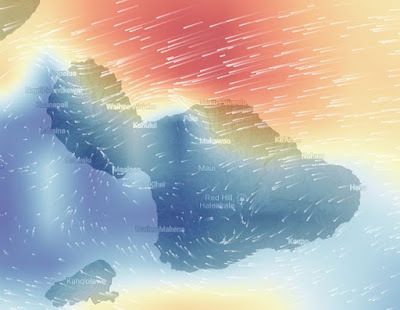 North Pacific has a couple of minor NW and NE fetches. I put an L and a couple of arrows to indicate the spot where the low that is about to bring some unusual weather (and Kona wind) for the weekend.

South Pacific has a strong and wide fetch oriented towards Central and South America. Angular spreading is always a hard thing to guess, but it might be possible. 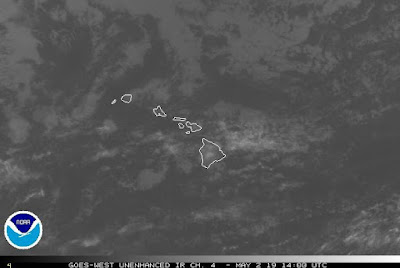