One week after my encounter with a section of the Lahaina reef, I was able to surf again. Just a short longboard session, it still hurts quite a bit. But that means I'm guilty to have driven to the south shore and not taking and photos (but I was busy with a lesson afterwards). Fortunately, I can always count on Jimmie Hepp to be shooting the windsurfers at Hookipa (if conditions happen and they sure are happening this week!).

This is my pick from his daily gallery. 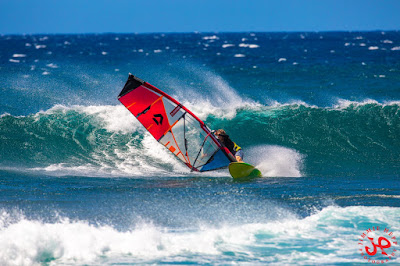 Cody Young will have a surf camp for kids with special needs at Launiupoko on June 1st. 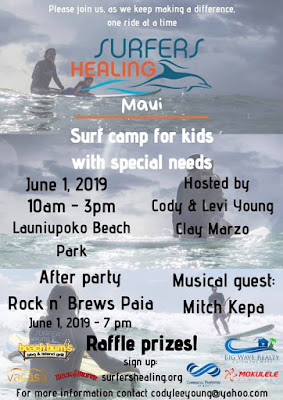 The very remarkable run of southerly energy continues. You look at the buoys, then you check the consistency and wind on the webcam and then you know enough to decide if to go or not. This is just a snapshot of a good set (I think I managed to get a guy in the barrel on the right), please don't base your decision on it. 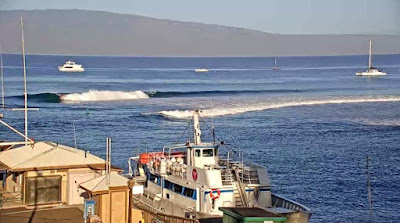 Pretty confusing directions at the buoys, the one I trust the most is Waimea. As you guys will remember, there have been NW fetches (of intensity varying from strong to medium to weak) for at least 8-9 days now. Yesterday ended up having bigger waves than the day before (so I was told), today, if it stays like that, might easily end up being smaller. "Subtle up and downs" I called two days ago... maybe not that subtle.

All I wrote is confirmed by what Pat Caldwell wrote yesterday (which I only now just read): Waves arriving 5/28 were generated 5/25 about 1200 nm away. This event should peak 5/28 and drop below average 5/29 from 320-340 degrees.
The next fetch set up 5/26-28. It had a wider area of near gales with the reach closer to near 1000 nm away. This should bring in surf above the May average for Thursday 5/30 from 320-340 degrees. It should slowly drop into Saturday. Tiny surf from the same direction is expected to hold into Sunday.

The North Pacific keeps having a NW fetch (which I forgot to circle). That low has been occupying the eastern half of it for many days. That also has pushed the seasonal high pressure more to the west (normally it sits where the blue H is). As a result, we are at the edge of it and we're getting calm mornings, slightly offshore winds in the afternoon, and overall a fantastic weather.

Good fetch in the Tasman Sea, not exactly oriented towards us, according to the great circle rays map on the right, but we might get a bit of angular spreading.

Morning sky. Gonna be another sunny one! 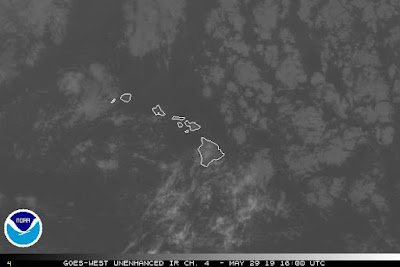