The clip below has been on the social media for a couple of days already, but someone might not have seen it yet. It's an incredible barrel at Teahupoo by Matahi Drollet. I like his hashtag comment: felt like I was making love in the dark. To me it looks more like fighting a fire hydrant in the dark.

South swell coming down a bit, while the new long period pulse is not really there yet. Let's see how Pat Caldwell describes the complex fetch evolution:

This final source over the 180-200 degree band had a long, wide fetch 5/17-20 with severe gales growing seas to near 30 feet. Those were weaker winds relative to the Mothers Day swell source near the same area, so this event is expected to be a notch lower locally. As with the Mothers Day event, and as is most often the case from the New Zealand source region, highest aim of seas and swell were off to the SE of Hawaii. This places higher error bars on the local surf estimate.
The PacIOOS/CDIP American Samoa buoy registered the rise of this event with 6 feet deep water swell at 15-17s building 5/22 and slowly dropping 5/23-24. These wave periods reflects the severe gale source. The Mothers Day source had winds to storm- force and the dominant period was longer.
Wave Watch III places the onset stage for the new event locally Saturday 5/25 centered from 190 degrees. Inconsistent sets above average are possible 5/25 PM.
The event should be filled in by Sunday 5/26 with a peak late in the day well above average. Slow change is expected with similar surf Monday morning followed by a downward trend into Tuesday from 180-200 degrees. Small surf from this direction should hold into Wednesday.

While it seems to be more like a Sunday arrival for this new pulse, there's still wonderful waves in the water from the previous fetches.
Here's a nice set at the harbor, check the webcam yourself before going. 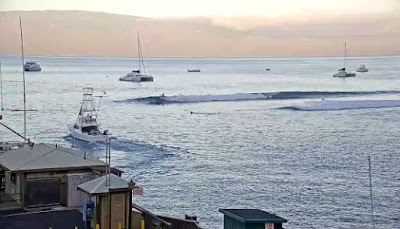 3.9ft @ 6s from 81° (E)
3ft @ 12s from 322° (NW)
The start of the NW swell was quite unimpressive yesterday and this morning it looks just a little more filled in on the Mama's cam, but not fully convincing yet. The wind is light and sideoff though, so when the set comes it looks pretty nice. Plenty squalls around the area, conditions might change quickly and often. Probably head high in the morning, a bit bigger in the afternoon with the active windswell adding on top and the upward trend of the other buoys (6ft 12s at the NW).

The low that generated the current NW swell is still there making waves, this swell is going to be long lasting. Windswell fetch pretty solid too. 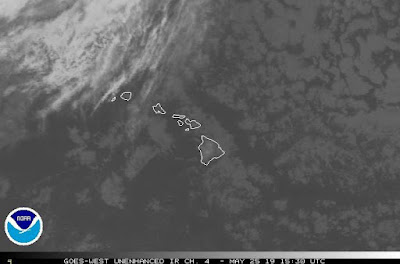