You always need another board, don't you? This is the unpacking of my latest purchase. I rarely go for a custom, most times I grab boards off the rack or used. This one was a bit of a act of faith, as I've never seen this particular model until... yesterday morning.


This is the link to one of the promo video I mention. I grabbed this frame of Kekoa Bacalso. That's exactly the type of waves I ordered it for and the type of turns I'd like to (try to) do. 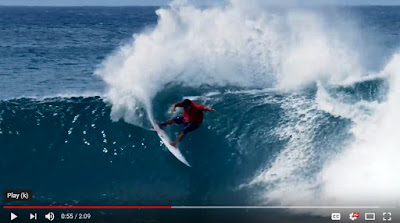 This wave instead is the exact opposite. Fun, but small and crumbling, that's where you can take advantage of a wider tail that keeps planing in the soft sections. I caught a few waves there and felt that the board needed more juice underneath. That was what I expected. 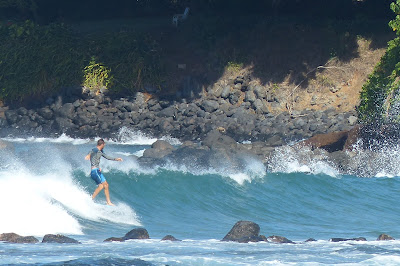 Perfect for the littlest of the Brown groms instead. The involuntary frame was provided by a tree branch. 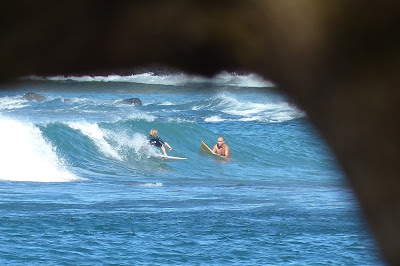 Hookipa looked really fun for windsurfing, but I was in new board testing mode and I waited until the wind would let go a bit... 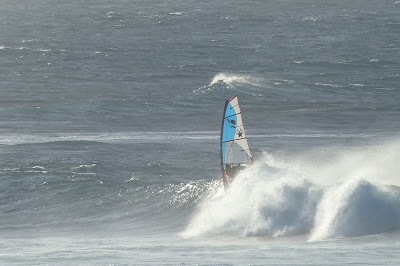 ...which it never completely did, so I decided to pass. Gonna be real windy the next couple of days, the test might have to wait... or I need to go to Oahu! 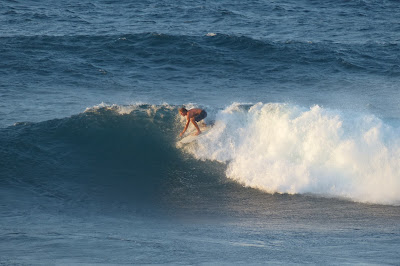 5am significant buoy readings and discussion.
South shore
No southerly energy at the buoys, the Lahaina webcam looks pretty flat.

3.3ft @ 11s from 349° (NNW)
3ft @ 6s from 80° (E)
0.8ft @ 15s from 28° (NNE)
15s reading at Pauwela is probably a glitch, what we have today is 3.3ft 11s of leftover inconsistent declining angular spreading NW energy and "only" 4.5ft 10s from easterly windswell. Imo, the directions are all influencing each other, in reality, based on the position of the fetches, the NW is more west and the E is more east than what it shows. One possible explanation of why this NW "underperformed" is that the strong E swell cancelled part of its energy. My observations of swells crossing each other from different directions is mostly altered shape of the waves while breaking (a daily occurrence at Hookipa). I don't believe much into the weakening effect, but sure, that would be a possible explanation. I still believe it was the angular spreading instead.

Hookipa probably head high, not much on the rest of the north shore, eastern exposures will have waves instead.

North Pacific has several small scattered fetches and the big and strong N one now aiming to our east, so I circled it in blue and we should get some angular spreading out of it. That's the end of the generation of the Honolua swell for the contest, they might have to condense everything in two days (most likely Sunday/Monday).

Tiny fetch in the South Pacific, won't do much. 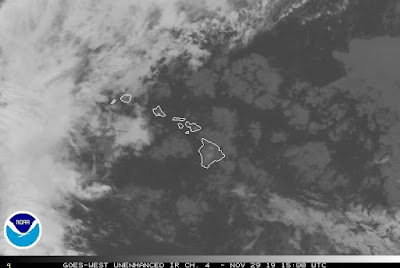